I dreamt about you last night.

I was throwing a party for you for some reason—even though I knew you probably wouldn’t show up. Our schizophrenic, artist friend, Daryl, was first to arrive…My brain sparked to life at the recognition of his Native American hair dusted gray…those sucked in cheeks, the dark eyes, that prominent sloped beak. It was so vivid, this dream, I could even recall the distinct smell of him—cheap, dark brown cigarettes mixed with the smell you find in an old car on a cold winter morning. He was really always your friend—even though he rather adored me and occasionally lusted after me. By now, I haven’t seen him for longer than I haven’t seen you. He may be dead for all I know…I hope not, but already having lived past junkie life expectancy, it’s possible.

In my dream, I was happy for the unexpected reunion. Daryl immediately flopped on the couch, as I saw him do a million times in real life. “Now we wait,” he said, lying flat on his back, lighting a cigarette & blowing smoke rings at the ceiling. He swung his leg listlessly off the side of the couch, his frayed boot laces making 8s on the floor. Other people were there, milling about like extras in a movie—I can’t place their roles in my real life. I remember being terrified by both the thought that you would and that you wouldn’t show up…2 sides of the same coin. People started to get bored and leave the party. I was embarrassed that I had thrown a party for nothing.

And then suddenly, I turned around and you were standing there, tall & beautiful & grinning that crooked smile. Flight kicked in first, a desire to flee from you–unsure of which version of you was standing before me…the you who called me Bunny and wrote loving inscriptions in the books you bought for me…..or the you who got dopesick and raged at me till I cried, that I drank to escape.  Then I realized it didn’t matter–I was just really, really happy to see you and I started crying. I told you, tearfully, that I didn’t think you were going to show up. You said, “I know, Bunny, but here I am” and you hugged me tightly…and I let you. I can still hear your Brooklyn accent…recall the way you had to lean over to hug me…you even smelled the same. And in the timeline of this dream you still loved me…but I woke up to a different one.

I often think about how I wish I had known when our last kiss was happening. I would have kissed you with all the love and fear and hate and sadness and happiness I held in my body for you. I would have made it memorable, something weighted, substantial. Something more symbolic of what we had. As it stands, I can’t recall. I know it’s probably worse to remember the actual last time I kissed you. We were fighting a lot then—so, sadly, I know I am probably just forgetting a cold, close-mouthed peck on your stubbly cheek as I escaped out the door—not knowing I would never get another chance to do it better. 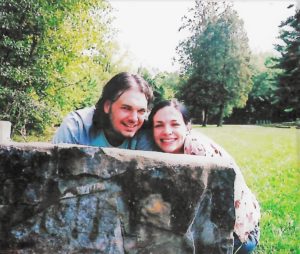 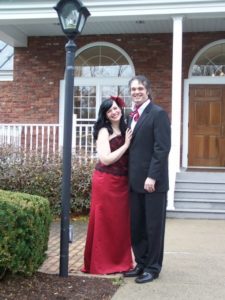 ‘I often think about how I wish I had known when our last kiss was happening.’

Boy, that one hits me.

@dbcooper I know you can relate to that sentiment better than anyone, love. Sitting with you in that feeling. *hand squeezes

I have to tell you that you have the most beautiful skin I’ve ever seen. You’re gorgeous!

@dancingthrough you are so sweet to say that…I think it might just be the photos though. Lol. Want to hear something funny? That second photo is back in 2006 when we were homeless for a bit. We were sleeping in that park where we took that picture of ourselves.  (Didn’t have a roof over our heads, but had a camera on us. Lol.)

The 3rd picture was our wedding picture. He wanted to look like Beethoven. *laughs, shakes head…..but, if you look closely at his hand, you can see our wedding bands. They were antique typewriter keys soldered to a weird band. He had an R for my name. I had the A for his. We were pretty fucking cool…if ill-fated.

I tend to agree that it’s worse to be able to remember exactly when the final kiss/act of affection took place. Of the previous fleeting flights of fledgling female fancy I’ve found myself in (to my folly), I can — on account of the abrupt endings — pinpoint precisely when the last kiss and such took place. That serves mainly to make each affair feel like a very finite and conclusive bit of history in my life. Yet if you can’t remember when the last kiss was because it very well could’ve been this or that kiss on any given day among countless days, then that relationship was surely not just a piece of your life but a part of who you are.

P.S. Reading your recent entries has given me the impression that you’re renowned for having fierce, fiery red hair. But those pics indicate that you used to rock the black!

@drbajahi can I tell you how much I love how you worded that? (Piece of my life vs part of who I am.) SOOO MUCH.

Yeah I had black hair while I was with Alex. Typically with short blunt bangs a la Bettie Page…we used to joke that I had an alter ego named Bettie Rage. For a while I even had a blog named Bettie Page Sweats Cheap Vodka. Lol.

@thecriticsdarling Ah, yes, I’m definitely getting some Bettie Page vibes from that wedding photo. And Bettie Rage sounds like a great premise for a comic book about a justice-seeking vigilante woman who is a pin-up model by day … and who pins up criminals by night.

I think about that last kiss, the last love-making. Especially with my ex-husband, 14 years together. Our separation went slowly, so I had time to think, “is this one the last?”
Dreams bring us odd offerings…