Ja began a slow decline in mood on Saturday. Suddenly, he was sleeping 98% of the day, waking for 5 minutes to drink water, then to pee, & back to sleep.  Used to being glued to me at all times, he insisted on being alone, on a corner table. His pupils were dilated & he started refusing food, or just lick it once & asking for another type. He sat in a hunched position until falling (literally!) asleep sideways, limp. The next day I went to the vet’s office (his vet’s not there ’til Wed.) & asked if it could be pain or something else, begging for something to help him. They sent me home w/Gabapentin, about which I have reservations (side-effects can be harsh & are common). Dose: 1ml every 12 hrs. I gave him 3 doses… & he became worse. Ataxia set in. It broke my heart in 3 different lifetimes to see him try to jump & the look on his face when his hind legs didn’t respond. I have not peed my pants since I was a child, but this did it. Then he vomited e-v-e-r-y bit of food he’d ingested the day before, **whole**, undigested. I gave him then a Cerenia pill… & waited. Nothing was changing. I thought this was the end & I was going to lose him. Then this morning I’m awaken by that familiar swat to the head, I feel nails anchored to my back (tummy sleeper, here) & a tongue licking my ear. “FEEEEED MEEEH!!”

He was as if nothing had happened, ate like a bear just out of hibernation, & demanded I play fetch for 45 minutes. I called his vet, who says he’s not sure what might’ve caused it all, but that in 3 weeks, when we go in for his monthly shot, he’ll do blood work. My eyes are still swollen almost shut. If I slept 2 hours during the past 4 days I was lucky. He’s sleeping under my computer table right now: 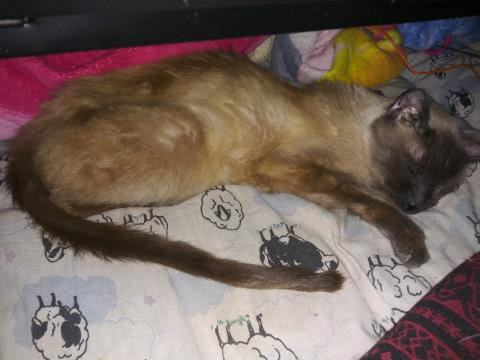 Anyone else into this? I just started on mine about a month ago. Turns out I was born in the planet Naboo. Look that up & you’ll know why that’s so exciting for me… being the nerd I am. The Force is with me! Also, Columbus actually is buried there… and I ended up in the American continent. Coincidence? I think not!  😁

I am stoked! NOPE, I did not make the cut, but I called in for feedback, & the sergeant I spoke with said I was only 2 points away from it (& told me what areas of the 3-simultaneous-parts test my errors were in). He says that if I retest in 6 months he’s sure I’d pass. If only all prospective employers wouldn’t mind giving you this kind of feedback, a lot more folks who are really good for something but lack a bit of prep/practical knowledge in an area could land their dream jobs, & employers could therefore end up with more jewels. But what are ya gonna do? HR is such a biased field. They grandstand about how they follow the law and they break it more than anyone else.

I bought a gun 😀.  This one is for home defense, & the authorities can thank the governor for allowing the release of over 4,000 cons so the poor things don’t get COVID… as well as granting bail of $0 to imprisoned CHILD MOLESTERS/ABUSERS. Because govmt. priorities, that’s why. I rarely comment on this type of thing but I draw the line where children are concerned (among a few other exceptions), & at seeing crime increase in my own neighborhood (because part of the released cons are local).

The gun shop (operating under the authorities’ radar, bless their heart and their balls… as “die Bestellung” mandated gun shops to be closed) guy asked me if I was nervous about having my background checked by the DOJ. I laughed & said, “I’m a notary, which, in order to become, I had my background done by the DOJ, the FBI *and* the Secretary of State – and passed them all“. I pick up this baby in 10 days, and I’ve already posted a sign on my front door that says “We don’t fire warning shots”.

I like cruising through allies when I drive anywhere & time permits it. I’ve found treasures in other people’s trash. I don’t actually dig in people’s trash, I just break for things people dump in allies (particularly boxes, in case an abandoned animal is there). I’ve found simple things that make my spirit happy. So, it was my groceries day. Nothing eventful at the store. But… on my way back home, at a stop sign, there was a Chewy box on the sidewalk. It had a carpet cleaner shampoo w/about

90% of it left, some used acrylic paint bottles, and Bath & Body Works stuff…

You sound like a thrift store shopper like me. Good deals especially free are hard to pass up aren’t they?

I too am alarmed at the release of inmates.  Supposedly only non violent ones are involved. I hadn’t heard about zero bail. Scary stuff.

@irishbudgie1954 – I like shopping, period 🙂  If I can afford to shop fancier, I do. If not, no big deal. I like alleys because it’s always the surprise element (tip: after a garage sale, they’re excellent  lol).

Yes, the idiots are releasing child abusers because they “qualify”, for the $0 bail. PISSES ME OFF that they QUALIFY for anything. You violate someone’s rights, you should lose yours entirely too.  As for the released ones being non-violent… yeah right. From the likes of the crimes being perpetrated around my neighborhood directly following the release, that ain’t true! :

@thenerve after yard sales what a great idea. Never thought about it, but that is perfect.

I have a close friend who finds clothes and furniture and various other things dropped amongst the trash on her walk to work. They’re all stuff in good condition too, almost like new. It’s amazing what people throw away. Last Christmas she found three strings of lights and a box of ornaments unopened.

@soldis – Ooooooooh being a Christmas nut, I’d have been in heaven!  LOL  And yes, it’s amazing what folks toss. Sometimes it boggles the mind…

I am a professional shopper lol but I also love great finds like that too!

glad your fur baby is better

@kaliko – Thanks! Little guy rules my days. And, I suppose that as long as he doesn’t lay blue eggs, he’s not in that bad a shape  😁

Glad your kitty pulled through. I know how scary that must have been. It’s never pleasant to watch a pet (or anyone!) go through end of life stuff. Glad you have more time. 💜

I hope Ja is doing better, that is very worrisome! I have been doing genealogy online for a few years – I find it a lot of fun, but I’m a history nerd so finding out that I have ancestors that were at historical places and times is fun for me 🙂

Who the heck does throw away stuff from B&BW? It’s so expensive!

I hope I find someone historical in my tree too… it’s proving really hard to come across info past my great grandparents, though. But it’s so fulfilling to find out bits of my past. You find where some of your traits come from 🙂

So glad to hear Kitty is okay.  Amazing recovery.  Who knows what it could have been??

@oswego – It’s a bad cold. It’s coming and going, but not as bad as that first time. It’s not easy on him because he’s very old, so, I take super-arch-extra precautions w/him and I over-freak out (mostly) when anything happens, because he can’t be anesthesized due to his age and weight.  I’m going to force my vet to give me an antibiotic tomorrow 🙂

Glad that Ja is doing better. Believe me I can relate to sleepless nights. It breaks your heart when our babies are ill.  Hope his recovery is ongoing.

Both my daughter and I own guns,  (my husband was a collector), and we know how to use them.  Guns are a necessity in many rural areas.

I love discovering hidden treasures.  I like to find little hole-in-the-wall places and just explore.  You never know what you’ll find stashed away in a dusty forgotten corner.

@adrift – Right?! I literally break for those hole-in-the-wall places when I find them. It’s like being on an Easter egg-hunt, and that part of the child in me has never disappeared 🙂    Totally agree on the gun issue. It’s just sad that so many folks are misinformed and miseducated about them.

Thanks for being my friend.  We’ve got a lot in common — especially the cat kids.  I’m so glad J bounced back!  Losing the little dickens is a killer — I am still in mourning for my Charlie, who went on more than 5 years ago.  Of course now I inherited M & P, & they partially fill the void.  M, male, all white except for a black tail & a big black spot on his back (Why didn’t they name him Spot?!) was poorly for a couple of weeks.  Wouldn’t eat his wet food, laid around looking like he felt like sh*t, etc.  I finally called & made an appt with the vet, at which point he perked right back up to his old self.  He’ll do ANYTHING to avoid going to the vet!  I think he was catching & eating mosquito hawks which are as thick as locusts here right now.  Dumb cat!

Aw sorry about Charlie 🙁 My Z also went about 2 yrs ago but I still see ghosts of him everywhere he used to be (not actual ghosts, I mean images of him).

Holy cow, 1583?!! How lucky!! I’m stuck at my great grandparents but that’s when the pandemic hit and all the places that can help in Europe are closed. We’re bumping into the same thing! :

How odd that you cannot read my notes! They are profoundly deep you know

@snarkle – Hahaha I see them now!

I’m glad that Ja is okay.

That’s good thinking for getting a gun right now. Just hopefully you won’t have to use it.

Yay for the free stuff!

@justamillennial – I know, right? And the gun, I do use it all the time, as I practice at the range. Not a skill you want to let go rusty! lol.