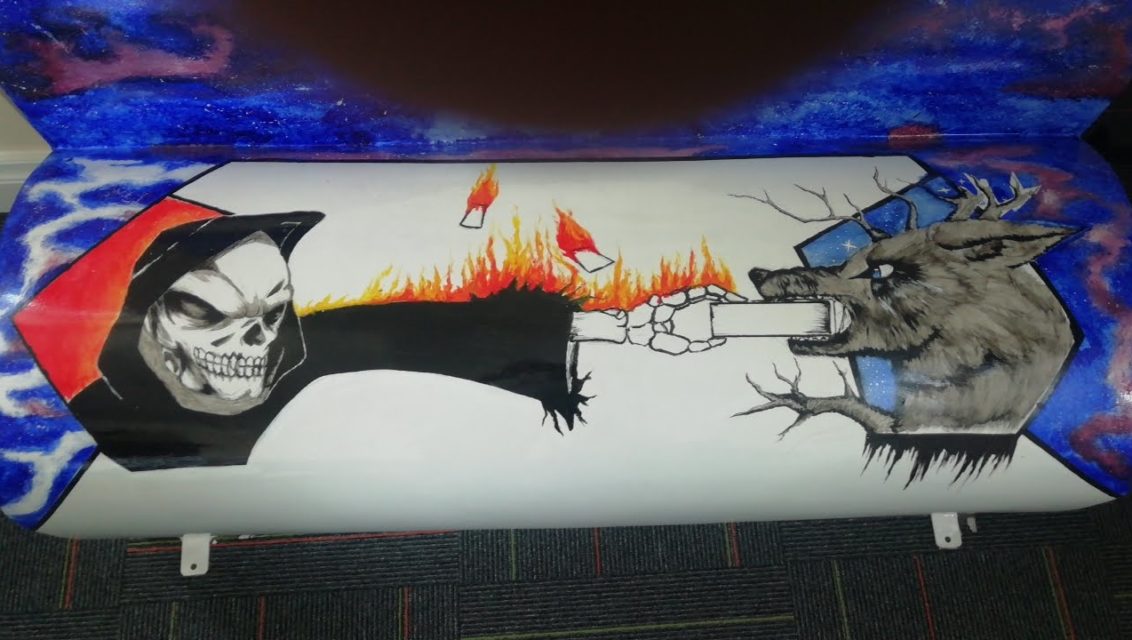 I had to go into town yesterday for an appointment.  My plan was to then go to pick up my prescription, fill it then go home.  And subsequently spend Monday in the house.

I had a plan.  It was a good plan, it was a plan that would work.

Except for one thing.

Wednesday and Thursday were intolerably hot.  So hot, in fact, it caused a power cut in the shopping centre where my doctors is both days.  Friday?  They be shut.

Thankfully we had thunder and lightning on Friday which not only broke the heat, it cleared the air and made it less muggy.  Life is now tolerable.

I was thinking about seeing about getting my Frank Turner tattoo when I noticed on FB that an artist at my favourite parlour had a cancellation.  I messaged them to ask about getting booked in, sent across the design and heard nothing.  I had to go into town anyway, so I stopped in to find out what was happening.  Turns out the artist thought what I wanted wasn’t my style, but there was another artist could help me.  I spoke to him, firmed up what worked for us both, paid the deposit.

Thus, I be getting new ink on the morrow.

Then I met up with my best friend and her lad.

So, this all happened last night.  The three of us have had our health issues recently and, as a result, we haven’t seen each other in ages.  I actually think it’s been about a year.

Nikki was moaning to me over text about the temperature last night and I said, semi jokingly, that she could always go down the pub today for a nice cooling pint or two.  She liked the idea, her lad agreed and thus we met.

It was fun.  Nikki gave me a Ravenclaw scarf she made for me, a Ravenclaw keyring and some HP pin badges, one of which says Ravenclaw.  (Bet you can’t guess what house I’m in?)

And we just chatted about shit both important and nonsensical.  I may have waxed lyrical about the show Pandora (seriously, I’m hooked because it’s so fucking awful).

Nikki was off the booze.  Not for medical reasons, just because she is.  Which, for me, is fine.  I wasn’t hassling her to drink.  Sober Nikki is no less fun than drunk Nikki, it’s her choice, she wasn’t lecturing me not to drink.  Kev was for most of the time, but he did have a pint at the end.

I just don’t get these people who think they have no choice but to force others to drink if they don’t want to.  Even if they used to drink.  Why?  Are you that superficial or insecure that you think everyone needs to booze?

Might help that I smoke and most of my friends don’t.  I would never pressure them to smoke, why is alcohol different?

Nikki’s lad did mention alcohol free cider, which we all agreed it would be about the same drinking fizzy apple juice.

So, yeah.  Had fun with my best friend and this time tomorrow I’ll have another leg tattoo.  Impressive for someone who thought he’d have no leg tattoos ever.

I’m glad that you got to hang out with your best friend, after not seeing her in over a year due to health-related issues.

I completely agree with you that you shouldn’t pressure any friends into having a drink. That’s probably why your friends like hanging out with you.

Are you European? I heard that it’s been incredibly hot this summer all over the Western Hemisphere, but especially in Europe. It was hot here as well, particularly last weekend, when it was 113 degrees here on the heat index. We got some rain, which helped cool things down, like I’m glad to hear that you got, but I think that it’s going to heat back up again.

You will have to post a picture of it….I am very curious to see what it will look like.  And just a political observation…it looks like trump and the New Prim minister are going to be best friends? Or is that what Trump wants?