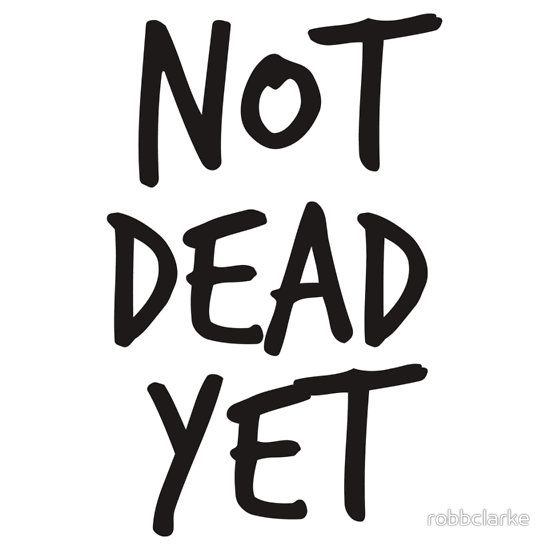 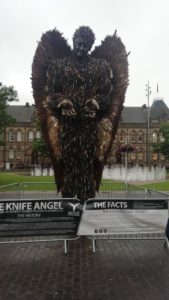 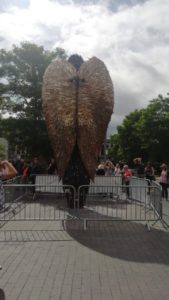 The Knife Angel. There was a knife amnesty and all of the knives surrendered (over 100,000) were sent to the British Ironworks Centre who, under the guidance of sculptor Alfie Bradley, turned them into the angel. It’s on display in Middlesbrough at the moment. It’s incredibly made and an absolutely powerful piece of art.

Many thanks for all the answers on my last entry, they were interesting.  If you don’t know what I’m mithering on about, go back, check it and add your opinion if you wish.

My tablet is away to computer hospital :¬( It wasn’t recognising anything plugged into the USB port and it would only charge when the battery was completely and utterly dead and would stop charging if the tablet was switched off. So, off it goes to be fixed. It could take up to two weeks, but I’m hoping it’ll be back sooner because I would like to use it when I head home. So, fingers crossed.

Tattoos healing up nicely. I have had to buy a pair of shorts, though. Haven’t worn shorts in decades, so that’s fun.

Oh, what a thrilling life I lead.

Amazing sculpture. The story behind it reminds me of the Iron Throne.

Someone I know made an eagle out of spoons and I’m sure other things. That’s what I thought about with the knife angel. It looks really cool. That’s my deep analysis.

And glad to hear you’re still kicking, we all are in our own ways!