I think Plato hopes that everyone reading will be a philosopher and not just take his word for it just because he ‘says so’ though he paints Socrates as a person that happened to *all* the time. I am guessing it happened to Plato all the time too and is probably still happening to this very day.

I am reading a translation by Francis MacDonald Cornford who as well as a classical scholar and translator was an English satirist who wrote the Microcosmographia Academica as a critique of university politics. I guess I trust English satirists who translate Plato but not English philosophers. That is meant to be a joke, sort of: I have a prejudice that English philosophy is narrow boring analytic philosophy and that those types could never understand Plato. Not that I consider myself one who does, you have just somehow turned me into some kind of lecturer.

I think there is a reason Emerson (I think it was Emerson?) called Plato philosophy and philosophy Plato and all the rest of the philosophers have been a footnote to him. It really is like all the questions and inquiries all the philosophers have asked through the ages have their roots these things first presented in one way or another by Plato. So much of philosophy is a footnote to Plato’s exploration of appearance and form, for example. I think all the *branches* of philosophy are footnotes to Plato, too. They were not separate branchescwhen Plato wrote but the roots of all the branches of philosophy are there.

Plato starts here with the assumptions of old culture: we might have designed a healthier society but Glaucon had to suggest chairs. Plato is a humourist. One wonders how much of this humour is Plato and how much of it is Socrates himself (and could Plato have conveyed Socrates’ sense if humour at all if he did not in some way share it?) After a while is actually hard when you start thinking about Plato and Socrates not to use the phrase ‘Socrates himself’ all the time even when you are not writing Monty Python parodies!

Socrates reminds us that the purpose of all this was to imagine a community that would ensure the greatest possible happiness for the community as a whole upon the premise that we would have the best chance of ‘finding justice’ in such a community. What does justice look like, what is the form of it, where do we find it, how do we know it when we see it? The nation turns its lonely eyes to Dyke.

It is here at the end of Chapter X that Socrates suggests that these guardians of the state “must not possess any private property beyond the barest necessities” and “no one is to have any dwelling or store-house that is not open for all to enter at will.” It is like the opposite of a government requiring citizens to quarter military in their homes! These guardians of the state, whose role would be to protect the state much like a militia, would not be allowed to dwell *anywhere* that *everyone* could not enter at will. It is not just that some may enter for certain purposes, all may enter their homes for any reason, the only necessary justification being that they want to. This would be absurd if not satire: if you are an auxiliary guardian in Plato’s state anywhere you live automatically becomes public space with no restrictions on entry!

So our warrior guardians, to keep their characters from being corrupted by extravagance, have to live with very little and certainly nothing in the form of luxury that others may have a lot of especially since Glaucon introduced chairs and cow sellers and war. Here Adeimantus poses a question I happen to think is quite brilliant and on point: “how would you meet the objection that you are not making these people particularly happy?” If they are not happy, he goes on, it is really their own fault, he adds, for they are really masters of the state, but don’t get anything out if that like other rulers do.

The Republic starts on the festival of a goddess (that the Republic starts this way could be another lecture) and Socrates wants to go home but his friends threaten to kidnap him. That is the honest truth about how the Republic starts, Mariah, but nobody acknowledges this. (Oh, and will you watch Love Actually with me?) So from the start we are presented with huge questions of ethics like: is it ethical to kidnap your friends even for their own benefit? I say yes, if the kidnapper is you, but otherwise I have to think about it…

His friends convince him to come of his own consent and he does, and then starts talking to his host, Cephalus, who looks so much older than he did last time, and so naturally Socrates greets him by asking about what it is like to be old and so much closer to the other side, and also, what it is like to have money? (Socrates himself has no money.)

Socrates says that most would say that being both old and poor makes one miserable but the wealthy Cephalus believes it is character that makes one content in old age. Cephalus is of the opinion that money has its place but is not nearly as important as most people would think. Socrates asks him what value money does have in this regard and he basically says that you can use it to resolve a guilty conscience, that when you have money you can pay people back what is due to them. He likes a statement by Simonides that justice is about giving everyone their due.

So then the inquiry starts: is it true? If you borrowed a weapon from someone who then becomes dangerous and unstable would it be right or wrong to return it? What if the repayment of money lent from one friend to another friend would do harm to the lender? That would do harm, so it cannot be justice. And so the Republic starts with the relation of ehst is ‘due’ to justice and now in book X Adeimantus is like, these guardians sure seem miserable! They don’t get any of the benefits most rulers have, no possessions, no privacy, it is like their whole lives are about fulfilling their *duty*. They are technically the rulers but they get none of the benefits of that, none of the luxury!

Socrates answers the objection that these rulers do not seem particularly happy. He offers an explanation with an analogy to art. In a statue, giving each part its proper colour, we make the eyes more beautiful. This example just made me giggle: we would not make the eyes so beautiful that they do not even look like *eyes* anymore! Nobody would then notice the eyes are part of the whole statue and they would not serve their function if you made the eyes too beautiful for the body.

In a way this for me is where philosophy starts, the kind that can re-invent society! This part of the dialogue reveals the assumptions (unquestioned premises) hidden in Socrates’ imagined community all along, and I sort of wrote them out on the page the best I could: is it *ever*, in a society where ideal justice has been reached, necessary to deprive some for the ‘good’ of the whole? Is it really necessary for any citizen to suffer in a cage of prescribed duties and obligations where they are denied resources for the sake if the whole? Is it possible to have resources without fighting over them? I think Plato wanted us to ask these kinds of questions and I wonder if I am the only one who sees it! They may be covert but when I question the assumptions that are the foundations of Socrates’ construction of this society they jump right out at me.

Honestly I am probably making a bigger deal of Glaucon’s chair than anyone ever has (don’t tell anyone the Republic revolves around Glaucon’s chair or you might get sent to Dr. Calica). I think that moment of humour is key in some way because if they would have gone with a plant-based society without need for cow sellers and war these assumptions would not have been implicit in Socrates’ imagined community. This feels so key and I wonder if anyone else even notices it.

*Can* we imagine a society with even the most basic luxuries, like tables and chairs (and chocolate!), where warfare is not necessary to protect the ‘state’, and where some are not led to suffer or live in prescribed chains of limitation for the sake of the whole? Is the most basic luxury even compatible with *everyone* having access resources and the potential to actualize their infinite potential? Is it possible to live in a world without haves and have nots and is it *ever* *necessary* for some to sacrifice for the whole if we are really constructing an *ideal* society? Or is the suffering and limitation of one the suffering and limitation of all? 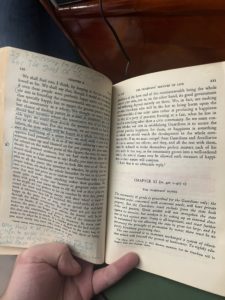