This afternoon I went to Ceragem. I brought my book and read a little bit while I was waiting (I read the first chapter before I left and I’m finding it good so far). This time they had me put the sheets on the bed myself for some reason and then, though they didn’t say much, I feel like they were especially nice to me for some reason. Also I wouldn’t know how to tell them but I am going to really miss them both when I leave Ensenada. It’s the same two girls working there every day and it’s going to be really sad when I know it’s my last time seeing them for a while and I don’t know if or how I’ll be able to tell them I’m going away. It will be sad. I won’t be able to tell them and I won’t be able to not tell them… but I know I’ll be back, sooner or later, and I hope they’ll be here too, because Ceragem wouldn’t be the same without them! As I was lying on the Ceragem bed these stories kept coming to mind, stories of unexpected disappearances, like Stargirl: “and then she was never seen again and nobody knows what happened to her,” or “and then she was gone, and nobody knows if she’ll ever be seen again,” sort of thing. It made me sad thinking that somebody might think that kind of thing about me.

The session today felt so much longer than usual and it was soooo beneficial in so many ways. I felt so much stuff going on in my spine today, like ugh stuff that feels connected to abuse and toxicity, and the session was so good at starting to release some of that stuff. I find that I get the most benefit when I sort of balance all of my weight on the jade stone that moves around below me and it is surprisingly easy to do that no matter where it is. I would have thought that it would be too much pressure but it makes me feel light as a bird and it also feels like it enhances the acupressure benefits of the treatment. Sometimes it feels like the machine has a mind of its own and today it just knew that my spine needed special treatment and it went really deep. I could have spent another hour lying there, or two, even, but whatever it did for my spine was really good, and I need more of that. It’s strange how sometimes I feel all this icky stuff in my spine that needs to move and other times I don’t… I think probably feeling it today has a lot to do with everything I processed yesterday.

After that I went to Granada Vegan Kitchen probably for the last time before I leave Mexico. Nobody was at the counter when I arrived so I waited around for a little while. I looked around and the first thing I saw was a sign, right in front of the kitchen, so obvious that anybody who got a job there would probably notice it within 15 minutes: “Prohibido introducir cualquier tipo de COMIDA o BEBIDAS.” Prohibited to introduce any type of FOOD or DRINKS.” Uh-oh, I am a rule breaker, and I’m not gonna blame Granada Vegan Kitchen for it, but… it would be impossible to work there for more than 15 minutes without knowing about this policy!

I wrote not too long ago about the day that I asked the cook at Granada Vegan Kitchen if I could bring in outside drinks. He thought for a second as though he wasn’t sure and then told me, “creo que sí.” I just hope that really nice girl who works at the beverage counter *knows* that he told me to break the rules because if not feel bad and I feel like a criminal! What did I save by bringing in an outside drink, like 10 pesos? And I am sure the drink I brought in was something they had there anyway! I am almost thinking that nobody was at the kitchen when I arrived on purpose, so I would discover what was going on. I just don’t know if this could be classified as a prank or what! 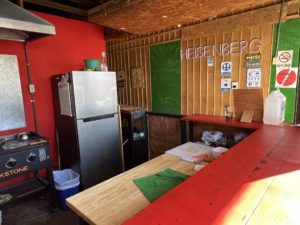 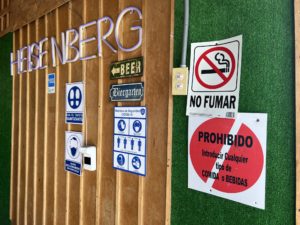 (You can see how close the sign is to the kitchen. I was standing pretty much right next to the sign when I asked the question about bringing in outside drinks!)

So, then the cook came to the kitchen and asked me if I wanted the seitan wings. They knew it and I said, “correcto.” Then the super friendly girl who works at the soft drink bar where they stamp your receipt to prove that you paid came into the hallway too, and I was like, “Qué onda?” He wrote down my order and gave me my receipt and then she went playfully skipping down to the soft drink bar and I followed her. She asked me if I wanted anything to drink and I told her not today, I was fine, and she said, “Perfecto.”

My Girl played while I was waiting for my food. Now that is a song that feels good to sing right now, the kind of song that would get me in the flow if I had a microphone and space to do some singing! Just a couple minutes later, someone from the bar that serves craft beer, on the other side of the same room, asked me if I wanted a beer. I have eaten here quite a few times at this point and even sat right in front of the bar and nobody has ever come up to me and asked me if I wanted a beer before. Once again I said I was fine, and as though some kind of strange collaboration was happening, they said, “Perfecto.” I don’t hear people say “perfecto” all too often, especially for no particular reason. I feel like when people say “perfecto,” they mean it, and it doesn’t *seem* like the sort of thing that people would usually say when you are saying, no thanks, I do not want a drink today. And yet that is exactly what happened to me, twice, turning down a soft drink at one bar, and a beer at the other… right after I discovered that there actually *is* a rule against bringing in outside drinks, and I feel bad for that girl who playfully skipped away because it was her drink I didn’t buy… but hey, if you remember, I left her a tip anyway.

The buffalo seitan wings were good but this time they were just a tad chewier than usual. I like them when they are harder. I left a tip at the counter as usual and walked to my car. When I turned it on, Wonderwall was playing. I drove back to the cabaña. For the first time I realised how close the cabaña is to everything in Centro Ensenada. Especially a little bit later in the year it would be a really nice walk back and forth, and I don’t think it would take longer than 30 minutes each way.

Today was one of those weird days when I feel like everybody in Ensenada knows who I am after all. Like the sorts of experiences I was having all the time in Antigua, but more subtle, more mischievous, almost. It is strange. Yo sé nada.