Peach dashed out the door while I was taking out the garbage at about 5:00.  I had a big, heavy garbage bag and two empty cat litter containers, so it took me a few seconds to put it all down.  By then, she had completely disappeared.

So, from about 5:05 to 6:47, I walked around and around this huge complex calling her. “Peach! Peachy Peach! Sweet Peach! It’s time to go home, little kitty!” After the first two blocks, I headed home for my winter coat and Peach’s two favorite toys, which light up and make noise.  I added, “Look, Peach, I brought your favorite toys! Let’s play with them! Do you want to play?” (The word “play” is to Peach what the word “treats” is to every other cat.)

I also locked Little Baby in the bedroom and opened my front door by about two inches.  I didn’t want Peach to try to come home and go away again because no one answered her meows. Yes, I realize that I took a big risk–that leaving your front door cracked open and walking away is asking for all kinds of trouble, from burglary to some psycho hiding in my bathtub and waiting for me to come home so he can rape/murder me.  I briefy considered the potential consequences, and then I did it anyway.  And I’d do it again.

The few people I encountered gave me funny looks, but no one asked me what I was doing or what Peach looked like. (I call that downright unfriendly, which is part of Memphis culture and not wholly unanticipated.)  I didn’t know where I was most of the time; I just figured that is find my way home eventually if I kept walking. But I didn’t need to omworry about that until I found Peach.

People leaving for work were driving like maniacs: all the roads are curvy with a speed bump every five feet and a giant pot hole every three, and these assholes had no problem going 35-40.  I started to worry that I would find Peach dead by the road.  I started walking the streets more, even though I suspect that Peach prefers the foliage. Also, dawn finally happened, which made it easier to be sure that Peach wasn’t hiding right by me.
.
Finally, I heard a jingle after the cat toy noises–thank God that I put her collar on her today. (And kept the bell.  I took Little Baby’s bell off partially to give her an advantage, and partially because she completely lost her shit when she was a kitten and we put a collar with a bell on her.  It wasn’t the collar, but nthat noise being made by something she couldn’t identify, which somehow followed her no matter how fast she ran or where she hid… It was hilarious, but I always take her bell off.)  She was sort of approaching me from behind, but she was more approaching a spot in my general vicinity, well out of grabbing range.

She didn’t want to play.  She didn’t want her toys.  Instead, as I talked to her in the dulcet tones of cat-baby-talk, she kept darting into hedges that I didn’t want to enter, and when she ran out of greenery, she just took off running.  Her top speed is definitely higher than mine, so she could have disappeared again if she’d wanted to.  Instead, just when I was sure she was gone because I’d lost sight of her and didn’t know which way she’d gone, I’d find her sitting calmly and waiting for me.

She did this five or six more times before darting into a building corridor, which opens to the street in the front and to greenery in the back, and contains stairs.  Well, I’m pretty sure that Peach doesn’t understand stairs, but I don’t know why she gave instead of running straight through and out the back.  Instead, she flopped down at the base of the staircase and rolled over to scratch her back against the pavement.  She didn’t put up a fight when I scooped her up, but she did meow in protest.   (“Just a little longer, mommy?” “Will you play with me? In the mud?”. “No, don’t hold me;. I’m covered in mud and you’re getting it all over your only coat! Do you want that?)

By now, I knew where we were.  I headed for home with all due haste, holding Peach tighter when she started to squirm and mostly ignoring her very vocal protests; I replied to her clearly unhappy meows by talking to her as if she’d been lost and afraid, and everything would be okay now because mommy was here, even though Peach had clearly been having a fantastic time…mud-wrestling? making mud pies? some kind of spa thing?  The world may never know.

She sounded very angry as we approached my apartment, and I did not get go of her until the door was firmly closed behind me.  She was mad and she still didn’t want any toys.  After a few moments, though, she started marking all the furniture and sniffing everything as if she’d been gone for years, not a two hours.  I rewarded Peach for coming home by serving breakfast: “Fancy Feast” Tuna Feast!  They loved it.

Peach is back to normal now: playing with toys, wanting to be picked up, etc. I’m so glad that I found her. I immediately said a prayer of gratitude–I could not have coped with losing Peach, especially like that, when it was my fault that she made it outside.

But what I don’t get is her behavior.  Why make me chase her like that?  The time I lost sight of her, I’d almost slipped in the mud and had to slow down.  When I reached the junction with no sign of Peach, she actually backtracked a little to show me where she was.  She definitely wanted me to successfully chase her, but what cat instinct is that?!

I need to keep in mind that this cat is only here at all because she meowed at my door, dashed inside as soon as I opened it, and made herself at home.

Also runs away once in a while and won’t tell me why. Lead me through a staged cat-chasing, and she doesn’t know. Asked how she got so muddy: her answer? “I don’t remember.”

Peach: Eccentric cat, or Machiavellian Boss of the criminal underworld? 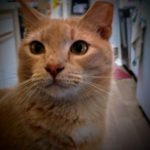 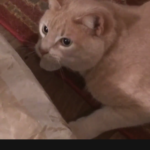 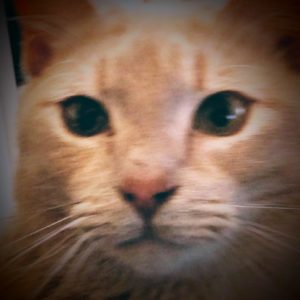 I’m going with Machiavellian Boss of the criminal underworld.  Parker loves Orange cats.  They are talkers.  Glad you found her/him

@margaret_1 I think she always intended to come home, and I was tempted to just wait…but the people in this apartment complex drive like they have three red shells deployed and another three in reserve.

Glad you got your kitty back. But she is definitely Machiavellian Boss of the criminal underworld!

Hah – she’s definitely got her own agenda.  But I’m glad you found her safely.