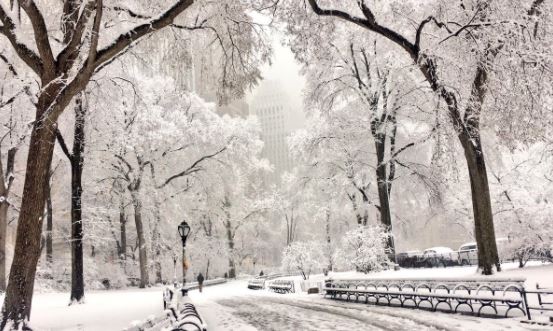 I can be specific about the date, because it was a blizzard that paralyzed NYC for days.  I was 2 years and 10 months old.  15 inches of snow fell, and traffic disappeared.  I recall looking out the window at the falling snow, watching it blanket Central Park.

My father helped me into my coat, hat, boots, mittens and scarf.  We walked out of the building via a side door (probably a service entrance) as the main entryway was still being shoveled out by the building staff.  We crossed a deserted Central Park West and entered a magically transformed park.  To this day it reminds me of the scene from Dr. Zhivago.  I remember Dad picking me up several times, as the snow probably came close to my waist at that age.  It was a disorienting feeling, not the park I knew, but there were no fears with Dad there.

My last memory of the day was him carrying me back home.  I probably exhausted myself playing – and I couldn’t say how long we spent there.  I just remember the (to my inexperienced eyes) surrealism of the day, the whole “unnaturalness” of Central Park covered in snow.  The fountains, statues, and benches all became something other.

what a lovely memory! I love Central Park!  My worst experience in NYC was in the 80’s walking thru Washington Square Part at midnight! People were selling drugs in the open, people had all kinds of face piercings, wild crazy hair. bodies laying on sidewalks unsure if these people were dead, asleep or just passed out! I was just a teen and it freaked me out!

that is a lovely memory

Great first memory.  I cannot think that far back.  *sigh*