Praise the Lord that her decline was so swift and that she did not suffer long.

Glory to God that I held her as she took her last breath, that my face was the last thing she saw, that my words of love and reassurance were the last sound she heard.  When she reached for me in her final moments, I was there for her paws to find.

Thanks be to Christ for my continued unemployment, which allowed me to be with her day and night for the entire duration of her illness.  By granting that I could be present, you enabled my ears to hear her weak cries and render what aid I was able.  As desperately as I wanted to, I could not restore her vitality, but, as her limbs weakened and became frail, I could lend her the use of my own.  I gave her my hands to wash and groom and pet, my arms to carry and cradle and hold, and I shared the warmth and closeness of my own body as she shivered through the nights.

Praise God that the end seemed so unexpected, even if only to me.  It felt so unreal to me that, when it came, I put my ear to her stillness of her chest, listening hopefully even as her head flopped and lolled against my cheek.  I give thanks for the faith I put into false hope that she would recover, that it was faith enough to prevent me from taking her to an emergency veterinarian instead of waiting for the appointment I could afford.  She spent her last hours in her home, with its familiar places and smells, not in a cold and sterile cage, alone and afraid. She was never impersonally tended by strangers, never left alone overnight.  She never cried out in vain, unheard or ignored.  I give thanks and praise for that.

Praise God that I will have neither nightmares of ordering her execution, nor the lingering, guilty, knowledge that I repaid love and trust with selfishness by denying her the respite of death.  I know that I could not have watched as they prepared to kill her, could not have allowed them to go through with it.  I know that I could never have ordered it done and left her to face it alone.  I am grateful, so grateful, that this choice was never put into my hands; even if I had been able to discern which was the right decision, I doubt very much that I could have found the courage necessary to make it.

Praise God for the fifteen years of Ankhesnamun’s life that she shared with me.  They began on a Saturday morning that felt like a Christmas from my childhood, because that day was the day when we would go to the Pittsburgh Humane Society and adopt two kittens.  She was the first kitten I saw when they let us in, and she was so ugly and pitiful–dull brown and bleary-eyed, skinny and ungroomed, sneezing continuously as she tried to squeeze as far back in her cage as possible–that I immediately told her not to worry, because I was going to adopt her.  We had to give her nearly right back when she was too congested to eat, and everyone said I should tell them that I wanted a different kitten, a healthy one, one I could have now.  But I waited for Ankhesnamun, and it hardly made a difference, because gone was the timid ‘fraidy-cat shrank away and hid in corners, and in her place we found a changeling, feisty and stubborn and playful.  The other kitten, Imhotep, had the advantage of size, not to mention three weeks as king of the castle, but if she failed to supplant him as boss of the apartment, at least she made him work for it.  As the kittens grew up, Imhotep was more my cat and Ankhesnamun was more his; one night, after he had showered but didn’t immediately get into bed, she sat on his pillow and meowed her irritation until he got into bed so she could sit on his chest and be petted.  I always wondered what she felt when the day came that he was gone, and he didn’t come back. I would have fought him tooth and nail for Imhotep, but if he had wanted Ankhesnamun, I would have let him take her, and she would have been gone from my life nearly six years ago.

I give thanks and praise that he didn’t, so I didn’t, so she wasn’t.  I give all honor and glory to God for six years, for fifteen, for the rest of the years that remain to me to remember her with love, and for the years after those, stretching into eternity, when the distance between heart and hands will close and we’ll be together again.

And I praise God that Ankhesnamun’s death will not break me like Imhotep’s did, and the difference has nothing to do with depth of feeling or the strength of our bond.  I praise God that I can say praise God and not fuck you, God!, that I can give thanks instead of vowing hatred, that I can count my blessings and not tally injustices, that I can feel sad without feeling abandoned, and that today has been the nine-hundred-and-twenty-third day of consternation, difficulty, and loss which I have survived without taking a drink. 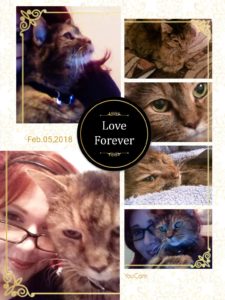 I am so sorry for her passing, but you have much to be thankful for, and praise to offer, which is beautiful. Glad that she passed peacefully at home with you.

You are a fighter, a good person, with your head on straight in spite of it all, and properly celebrating a life. THAT makes my day! 🙂 I know this is hard, and awful, and I swear you’re going to be okay, one day at a time. Keep that +900 day counter going up!

@anesthetic I think that perhaps you and others are mistaking my tone. This is not peaceful, or triumphant, or hopeful. I have been shouting my praise like shaking a defiant fist at the sky.

I am so, so sorry. It seems she had a beautiful life with you.

I have nothing to add to this at all. I’m thankful that you are able to have some peace instead of tormenting yourself over what decisions you did or didn’t make. In the end you were there for her when she needed you.

To choose gratitude instead of bitterness. Your words touch me

wonderful praises for the painful loss