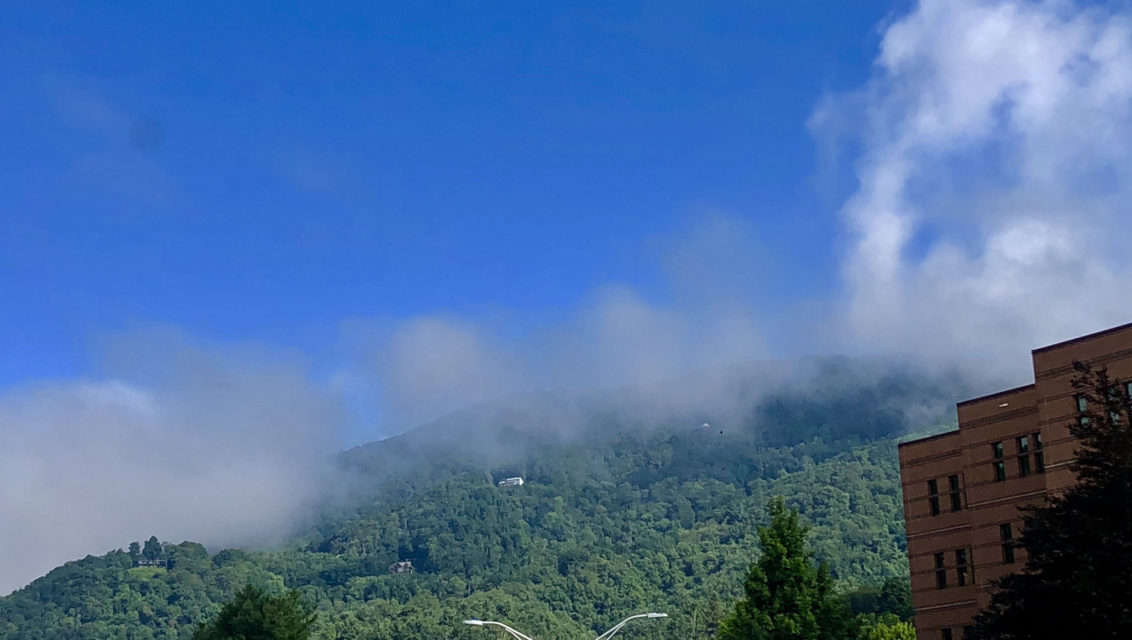 Well of course I haven’t made an entry since I was frantically searching for pumps to wear to Cousin E’s daughter’s wedding, despite my repeated vows that I’ll start writing regularly again. Oh, well, twice in a month is actually pretty good considering my usual abysmal record.

The wedding was lovely, although it was a long drive for a very quick trip. I don’t think I even mentioned last entry how Baker B and I had planned to make a little vacation of it. The wedding itself was in Harrisonburg VA, which is about 4 1/2 hours north of us- a couple of hours southwest of DC. We haven’t taken a Virginia trip in ages so decided to spend two nights in Lexington VA before the wedding. Sadly that was not to be, as Baker B’s mom fell the week before we were due to leave. She is 97 and lives by herself. Or did; this better be it for living alone. Not only is she 97, her mobility is horrific, and she can just barely get from one room to another. She has also fallen several times, although she’s managed to not do any damage until now. This time she broke her hip- apparently not a terrible break, they just put a pin in it, but bad enough that of course she was in the hospital for nearly a week, and now is in a nursing home for rehab. She thinks she’s going back home afterwards. And actually if she can afford round the clock home health care (she finally agreed to it for a few hours daily a year or so ago), she can go back home. I don’t know that she can afford it, but we’ll see.

ANYHOW, my point was that I ended up going to the wedding by myself since she was still in the hospital that weekend, and Baker B didn’t want to be that far away in case anything else happened. They were also supposed to be moving her to the rehab place, although they didn’t move her until I was already back, but it was another reason for him not to go. So it was a solo trip, which was fine although I wished I could have spent two nights. It was over the 4th of July weekend (or one of the two- this year the 4th was Wednesday) so of course the traffic was awful. Made even worse by the fact that NOBODY IN THIS COUNTRY KNOWS HOW TO DRIVE PROPERLY ON THE INTERSTATE!! I did not realize the extent of this until I drove in England, and discovered that on double-lane roads you drive in the non-passing lane (our right lane; their left lane) until you need to pass someone who is driving slower than you are, whereupon you pass them in the passing lane, and then you get your ass back into the non-passing lane!!! You can get a ticket in England for continuing to drive along in the passing lane if you are not passing! That is actually a road rule here too, but it is a rule that is totally ignored. So for 4 1/2 hours I was driving behind eedjits in the passing lane who were not in fact passing,  but were just la-de-da-ing along backing both lanes of traffic up and making it even worse than it already was.

And I will note right here that traffic on the highways in England seemed to flow MUCH MUCH more smoothly than it does here. Not surprisingly.

Going north I just endured it, but coming back I decided to take Highway 11 as much as I could, which parallels Interstate 81 most of the way through Virginia. Eleven is four-lane mostly, but goes through all the little towns so is technically probably slower; however it was SO worth it. There was hardly any traffic (everyone was poking along in the passing lane on 81) and it’s a gorgeous drive. It’s gorgeous on 81 too, going through the Shenandoah Valley, but hard to enjoy when my head was exploding from the horrible traffic/horrible drivers. Eleven does occasionally merge onto 81 but not as often as I thought I remembered it doing, so that worked out well.

Anyhow, the trip would have been much easier with someone to split the driving/head-exploding duties. Still, it was well worth it to see my cousins and to attend the Big Wedding. B, Cousin E’s daughter (who is in no way old enough to be getting married,  as she’s only about seven… okay, she’s probably 27 by now but in my mind she’s a small child) has been planning this for a year so it was all very well-thought-out. And gorgeous. It was at a winery called Brix and Columns, which is outside Harrisonburg. Very very pretty area: 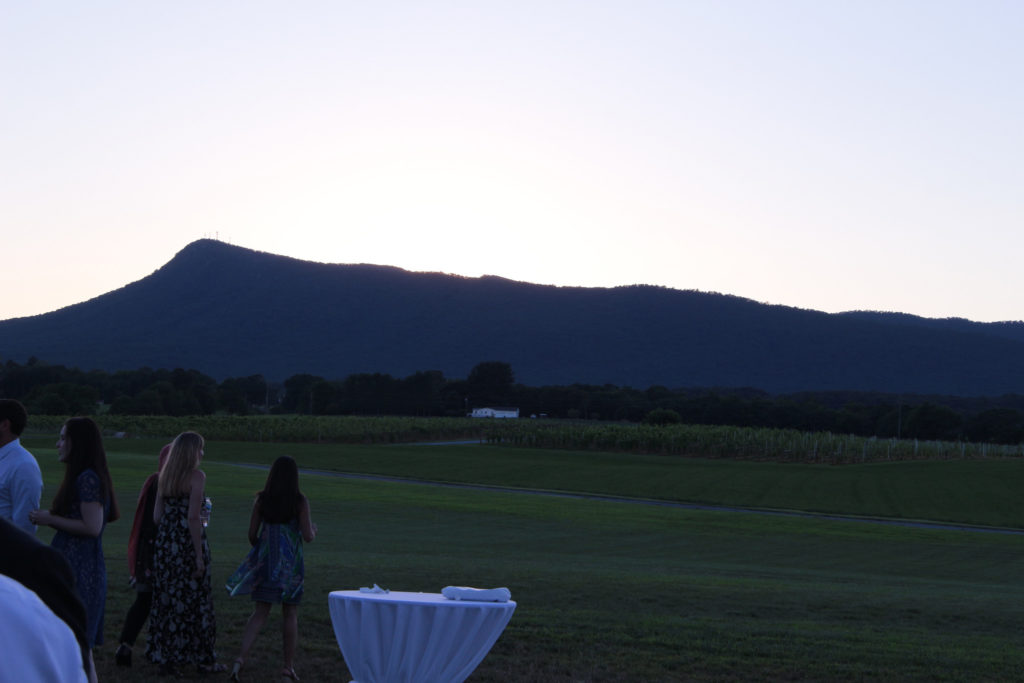 Weirdly I didn’t get any pictures of where the ceremony itself was – this was where the reception was held. Of course they were in the same vineyard area, but the ceremony was outside this huge old (? I think old?? Actually never got any historical info on it and I don’t see any mention of age on their website so it’s probably not historical at all) building: 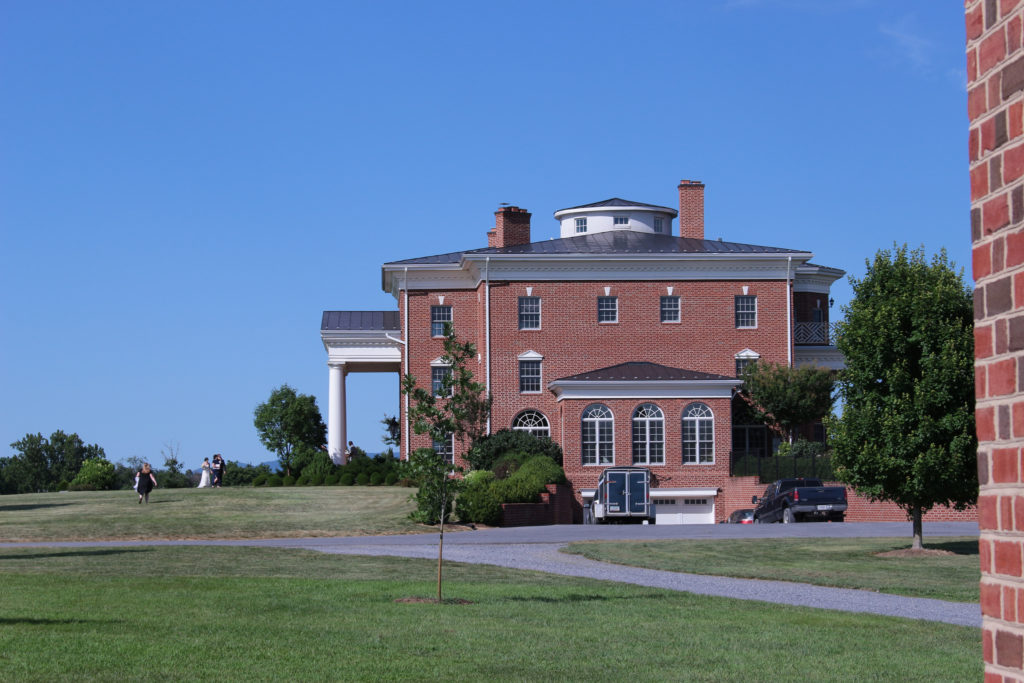 I was standing where the reception was, and the ceremony was on the far side of that house. Or whatever it is.

And YES!! Once again I totally missed that it was outside!!! I seriously do not know how we were supposed to figure that out- apparently there was a note on the wedding blog about wearing shoes you could walk over grass in which clued everyone else in on the location, but I didn’t see that either. At least this time I was wearing an outside-appropriate dress. Although had I known, I would have worn sandals and no hose. Yes, I wore hose. I think I was the only person at the wedding in hose. Go, me!

At least it was very pleasant weather, not blazing hot like it had been earlier, although I also would have slapped on some sunscreen had I realized it was outside. Next time I will, oh, ASK THE BRIDE/GROOM’S MOM. Duh.

Anyhow, my point somewhere up there was that I didn’t get any pictures of the far side of that big building, where the ceremony was, because B had asked everyone not to take pictures during the ceremony (why did I not take some before?? Who knows!) and although I set out at one time during the reception to walk over there, I got sidetracked and never did make it.

Oh, look, it’s Cousin E, Cousin J, Cousin MJ, and me. And my hose and not-sandals, which would have been WAY easier to find than pumps, as that was all I DID find whilst shopping for shoes. At least it wasn’t that obvious I was wearing hose. Cousin J and I hung out in my room drinking wine after we got back from the festivities, and it was THEN she said, “OMG you’re wearing HOSE!!!”  At least I didn’t look like I was going to an interview. 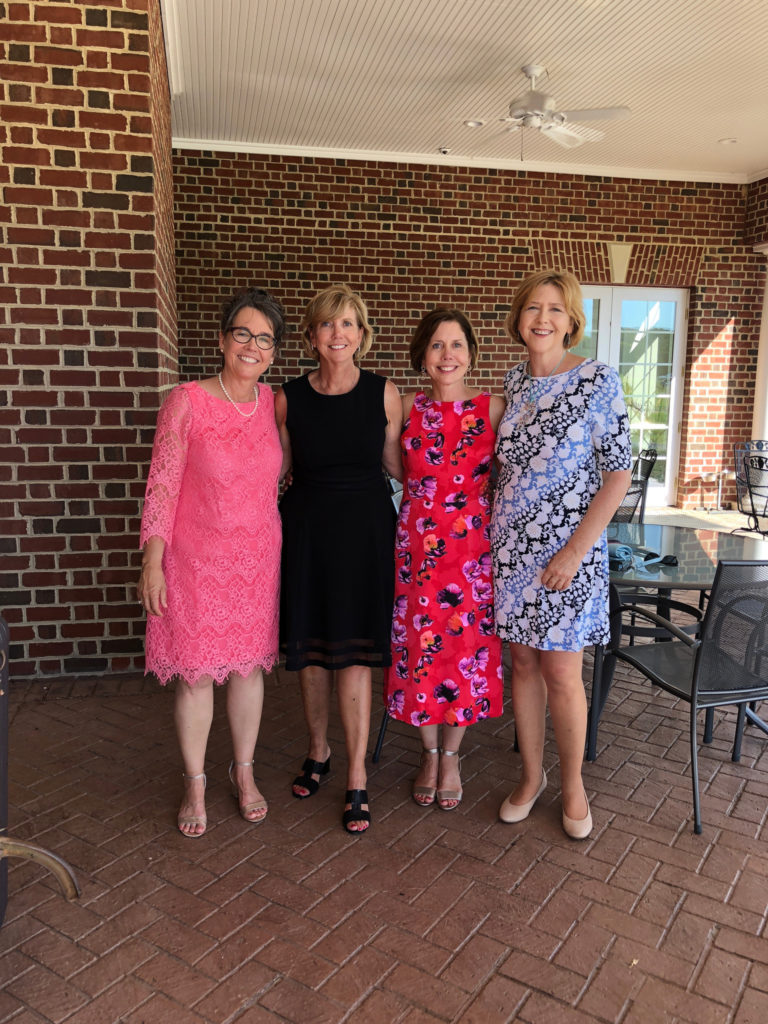 Cousin MJ and her adorable kids. Despite one being more interested in her phone than in us, as shocking as that seems. 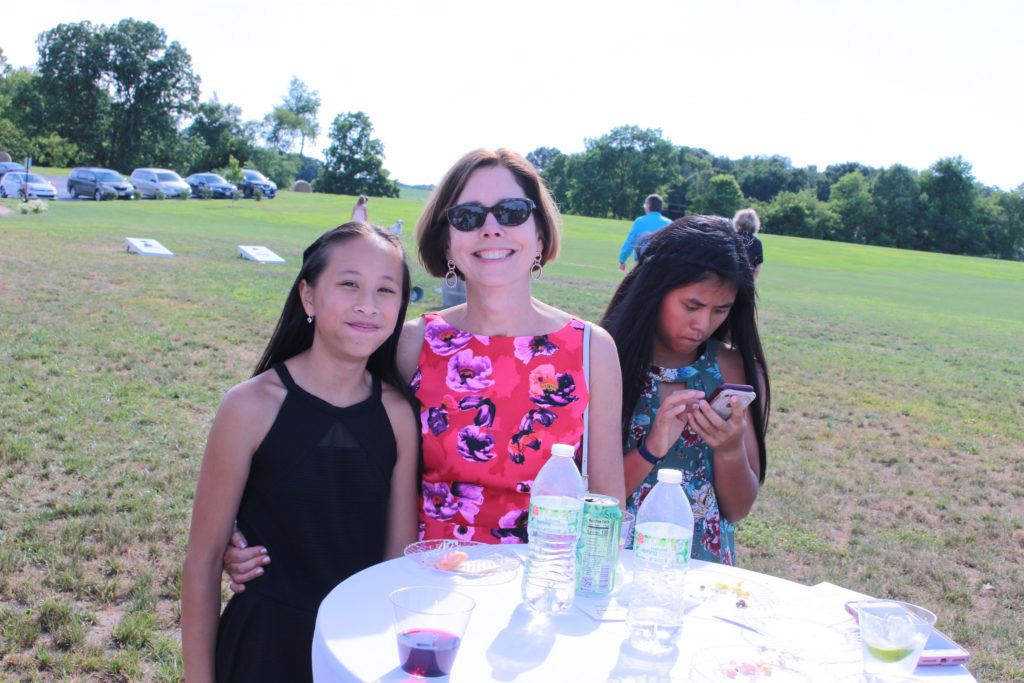 My brother – he and my SIL attended, and actually did offer me a ride, but it would have meant one of us driving ANOTHER hour to meet up, so I declined. That’s MJ’s youngest as well. 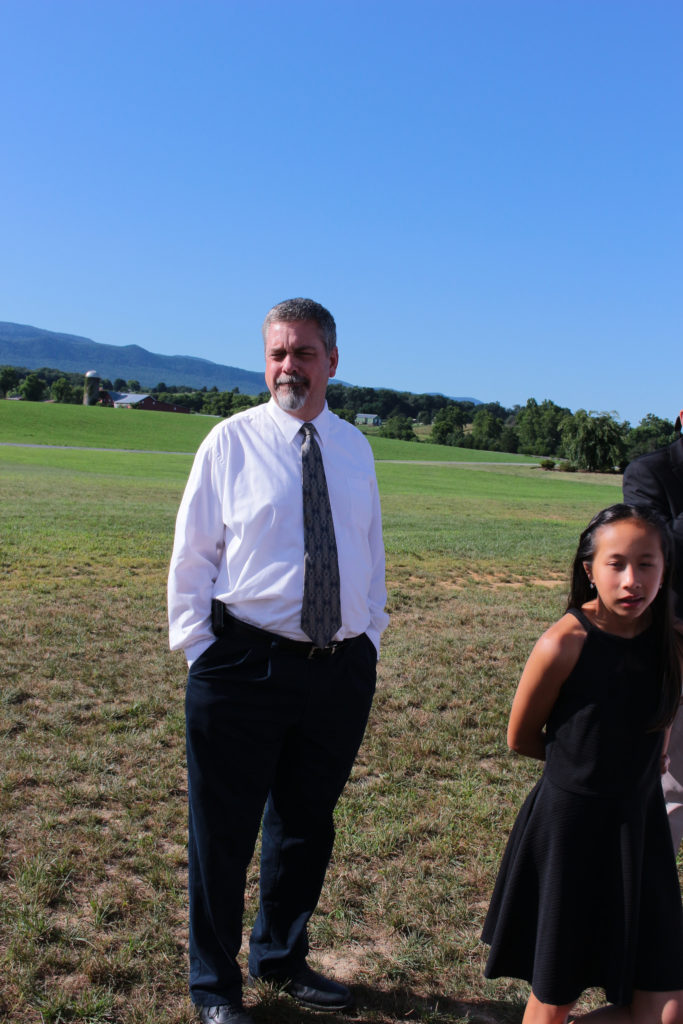 Cousin J with her oldest kid and her husband. 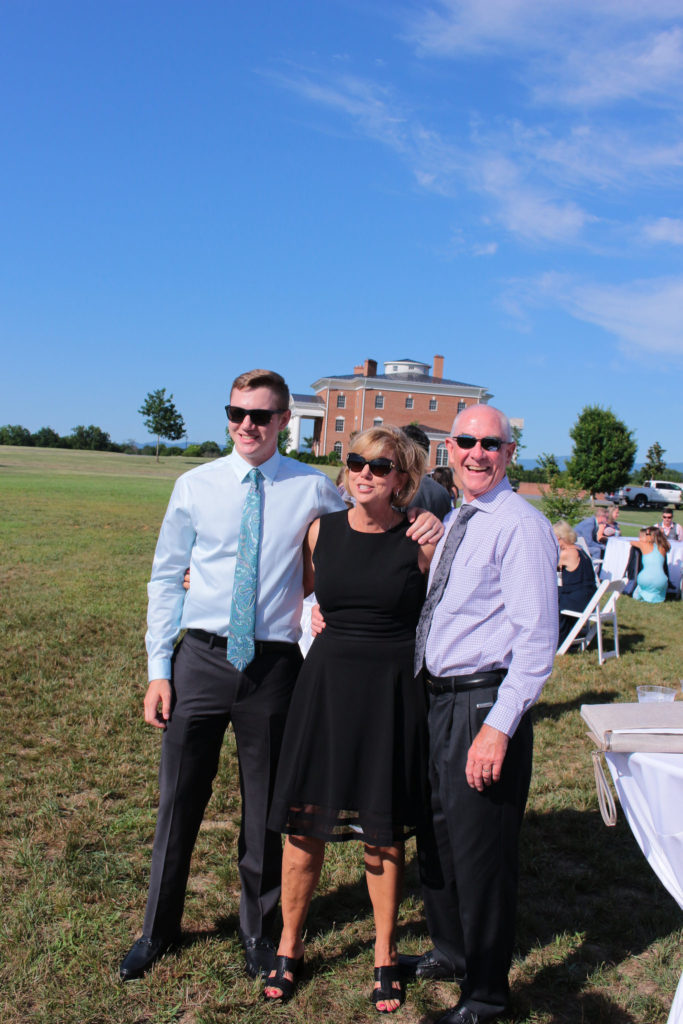 Cousin E’s son’s children, getting all sugared up: 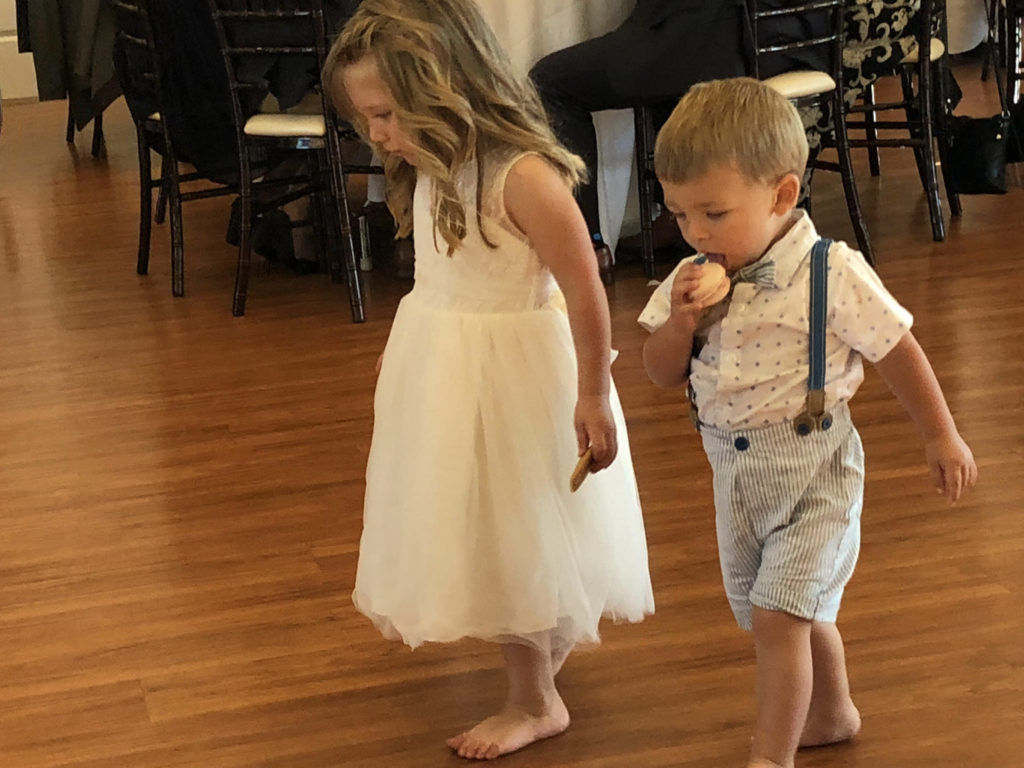 And the star of the show, B and her new husband: 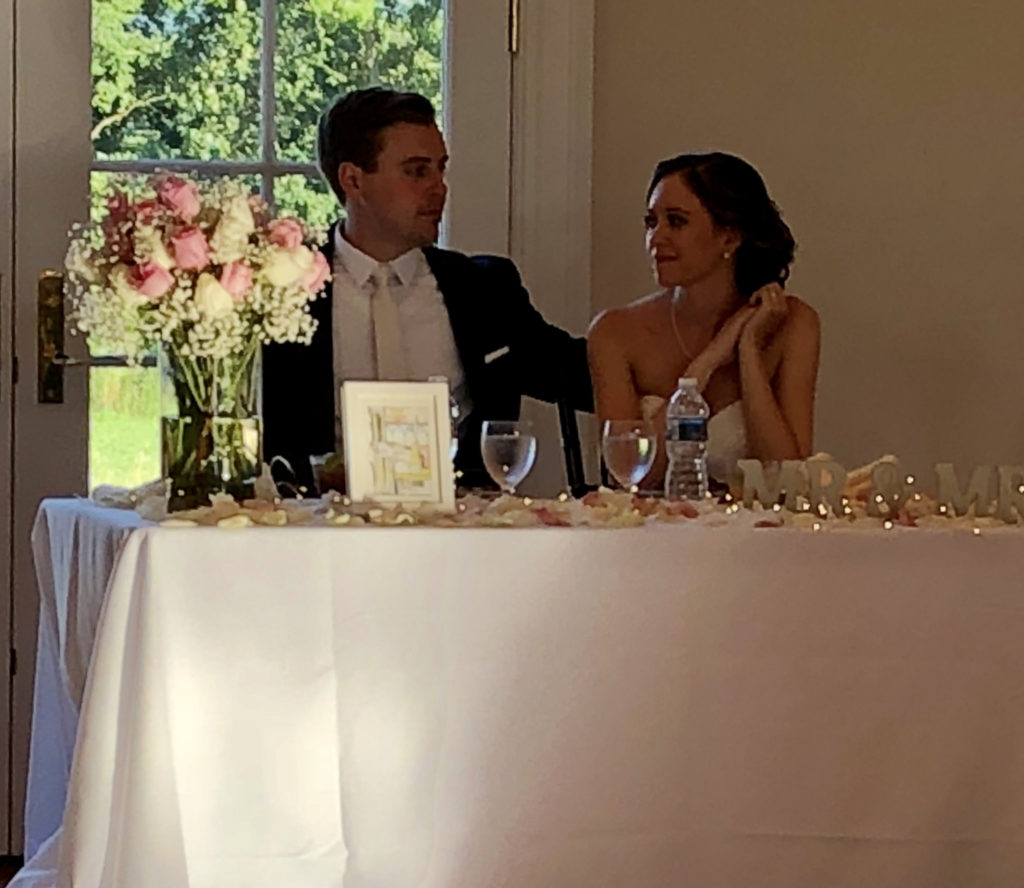 Along with fog which blew all over the place during the bride and groom dancing part: 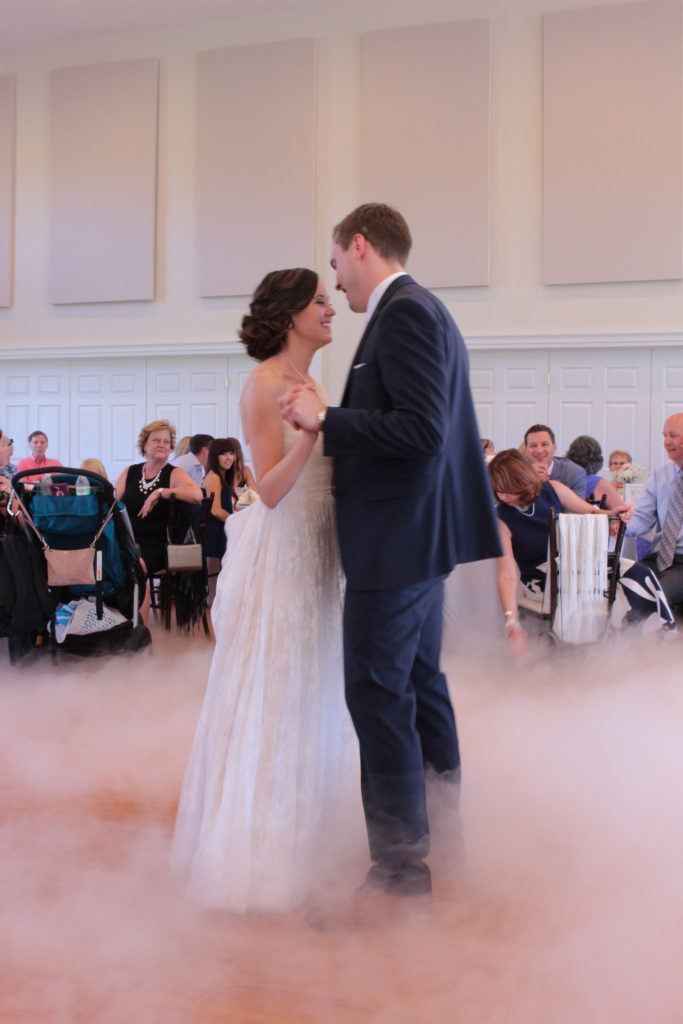 Amusingly, it got WAY thicker than that, but sadly my fog pictures were all very blurry.

A whole lot of dancing went on. With very loud music that I did not understand, being elderly as I am. There was actually a place on the RSVP to list songs that would get you dancing, and for some reason I didn’t list anything, but later on REALLY regretted not listing something by, oh, maybe Tom Waits to offset the mostly terrible kiddie music.

Innocent When You Dream would have been perfect!

Oh, well. I DID dance, kind of –  we’ll call it dancing – with Cousin J and Cousin MJ and some more very over-sugared small children. We waved our arms and scooted around on our feet for ages, and had a lot of fun. I really really wanted to demonstrate Bernard, Fran and Manny dancing in the last episode of Black Books, but the music was so loud I could not have explained what exactly I was doing, and would have just looked insane.

A good time was had by all, and I just wish it could have been longer, since I haven’t seen The Cousins since the Boat Weekend two summers ago. They are going to try to come down and see my dad this fall, though, so that will be fun. And… time to get back to work, which is ridiculously slow!!

Lovely all the way around, I even got so caught up in this I forgot the crack I was going to make about pumps. Couple years back I drove back to Oregon for my daughters wedding. I didn’t take photos, viewing this I now regret it. I completely forgot that OD had an Edna Million. Cool. It’s been a long strange trip for Open Diary (sorry, wanted to reference ninth and hennipin, but the Dead prevailed.).

Wow.  So nice to see these pictures.  You look lovely in your hose and pumps.  Sandals in grass are overrated.  🙂