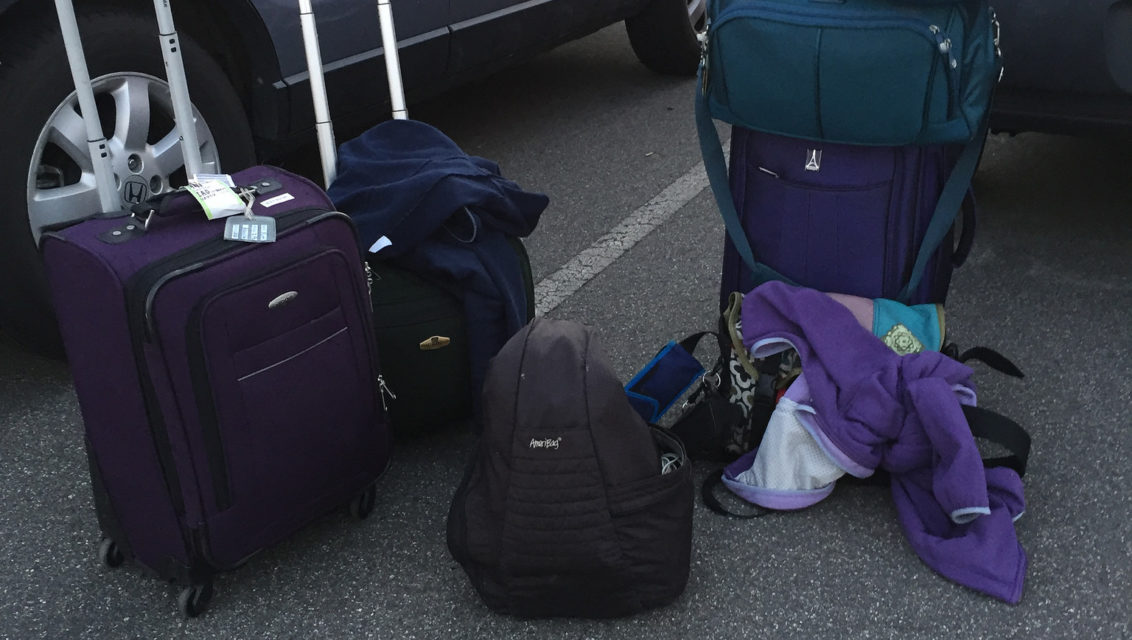 Ohhh, how sad it was to have to leave England and travel back home!!! Of course I missed Baker B and the kitties terribly, but I wanted them to join me in England – not for me to return to the US. Sadly that could not be, so return to the US we did, on Saturday, May 13. 2017. YES, over a year ago.

Of course it was The Day From Hell, as returns so often are. We had a two hour drive to get to Heathrow, so left Peasedown St John at a little before 6:30 in the morning. Our flight didn’t leave till 12, so that seemed like PLENTY of time. Hahhahahaha!!! Well, we DID make it, but not with any room to spare for things like breakfast and coffee and trips to the bathroom. The drive was fine – we took the A roads instead of the through-Bath-through-Bristol-Around-the-World M roads. We drove past Stonehenge on the A303, the remaining road that goes past Stonehenge, and could see it in passing, which was fun. And the scenery was gorgeous. So the drive was easy and painless, and we got to Budget seemingly in plenty of time to turn in the car and get to the gate, but of course it took forEVER to get the car turned in –  I could not tell you why now, it just DID – and it took another forever to get through security when we got to Heathrow. And poor Kim was, as usual, having an endless array of issues with her luggage. She had WAY too much stuff and isn’t a good packer, so was losing things and dropping things and couldn’t find anything she needed while everything she didn’t need was falling out of her bags, and she couldn’t get her laptop unpacked in the security line and was all upset about holding up everyone else ….I felt like I’d overpacked too, as USUAL, but I had everything where I could find it and although it’s always a pain going through security and you always feel like your stuff is everywhere, I was just annoyed by it, while Kim was coming unglued.

And the London to Dulles leg was awful! The long long long seven hour leg. Going to London, the plane was bizarrely empty and I actually got to stretch out in the middle unoccupied seats and have a makeshift bed. Going back to the US, it was PACKED. No stretching out! In fact, the old woman in front of me immediately put her seat so far back that I could barely move. And believe you me, I did kick and shove her seat (not completely intentionally — if I breathed, I smacked into her seat) but to no avail. There were also WAY too many babies, and one was right beside me across the aisle – but I will say that this baby was the most amazingly well-behaved baby I have EVER seen, especially on a flight. She shrieked and cried a few times (as they ALL did) but it was a seven hour flight, and I wanted to shriek and cry myself more than once. Mostly she played happily with her VERY attentive parents and slept and smiled and waved at me which was very cheering. And the other, further-away babies weren’t too bad either.

Then, when we got to Dulles and changed planes, it was Customs Hell. OMG. I still don’t know what the fuck was going on, and of course by now the memory has faded and all I recall is that it was AWFUL. I know we had to walk MILES to get to the Customs area, and then the lines were just absolutely INSANE. We had the cards that we were given to fill out  while still on the plane, and we’d filled them all out, but Grumpy Bitch Militant Woman who was herding us into the line said we didn’t need those cards- we’d fill out the information at the kiosks! And she also snapped grumpily and bitchily at Kim, who had pulled out of the line to try and find something she’d lost — the card, I’m sure – and told us to stop holding up the line!!! Whereupon I actually spoke up, amazing for meek and mild me, but I was exhausted and cranky myself – and said, “She’s not holding up the line, we’ve MOVED OFF TO THE SIDE!!!!” Of course she just glared at me. And probably added me to the No Fly List.

But it was SO INSANE. The customs line felt like it went for MILES, and it zigzagged back and forth, and all we knew was that we were supposed to put the customs information from the cards that we’d already filled out into the kiosks. And although there were 20 kiosks, they were only letting people use 2 or 3 of them at a time. Because … the security people had to watch us enter the information. I think. Maybe. Who knows!! There were a whole lot of people who were even crankier than I was – and who were a whole lot more vocal – but the explanations that the security herders gave us made no sense to anyone. We blamed Trump and his idiotic racist travel bans, of course. Luckily for us, we are middle-aged women who are visually about as white as you can get and we were not detained. I will say all the security people- except the initial militant rude woman- were very nice and very patient, and appeared to not have a clue about what was going on either. At some point they finally opened up more kiosks, and… made us go to the back of another line!!!! It was like being in a bizarro NightmareWorld where absolutely nothing mades sense. 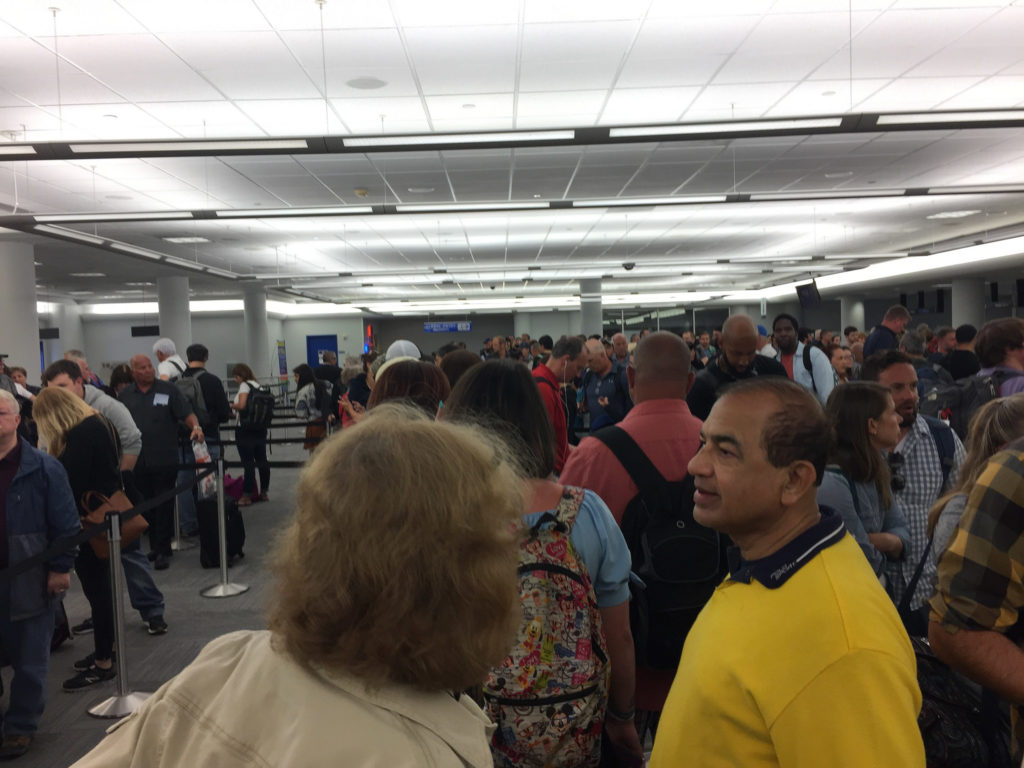 Kim trying to figure out the kiosk we finally reached. It took your picture. Both of our pictures looked like exhausted, baffled people saying WHAT THE HELL???? It’s the look Kim has right there. I don’t even remember taking this picture- I think I’d already done my kiosk-thing. 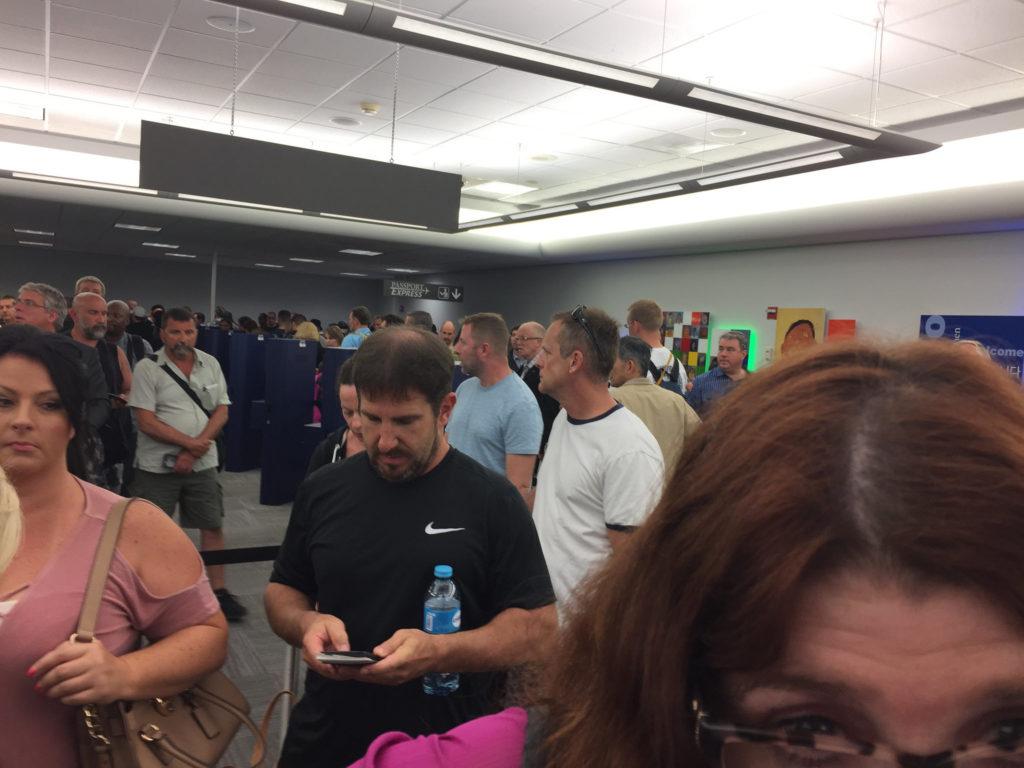 After the kiosk, we took our pictures from the kiosk to the security checkpoint… where they just welcomed us to the US and waved us right in, barely glancing at the kiosk information. That part took about ten seconds. Of course by then we were afraid we were going to miss our connecting flight to Charlotte, which we’d had a 2 1/2 hour layover for that got devoured by Customs Hell. So we had to rush madly to the NEXT gate, with no time to stop for food or drink.

But we made it. And here’s Charlotte, our Big City. Which doesn’t look very big at all, especially after London. 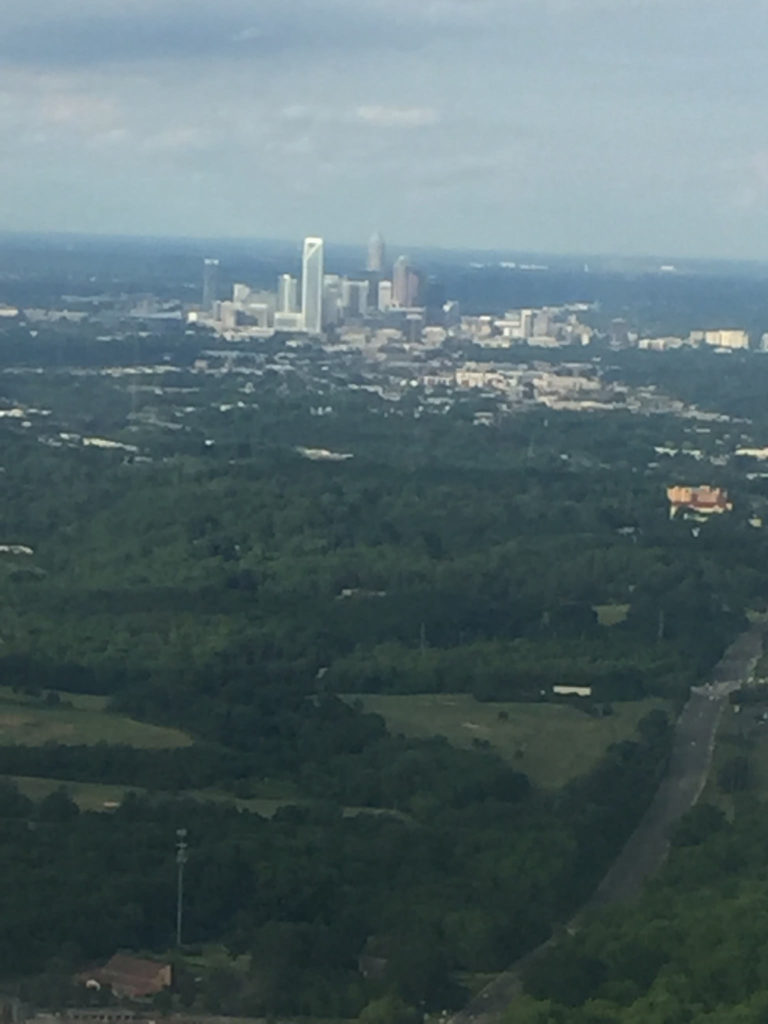 Soooooo…. that is IT!! I dug up a few more photos just to wrap it up.

My trusty messenger bag, that has now been on three trips to England. I bought it specifically for the first trip in 2010, took it again in 2013, and decided I would take a much smaller and lighter bag this time. Spent AGES shopping online for The Perfect Bag (must hold camera, iPad, and all other essentials on the flight and during the rest of the trip!) bought one I thought would be fine.. then the night before decided it was TOO SMALL and took this one yet again. That badge is from the Crop Circle Information center- I got it on our previous trip. 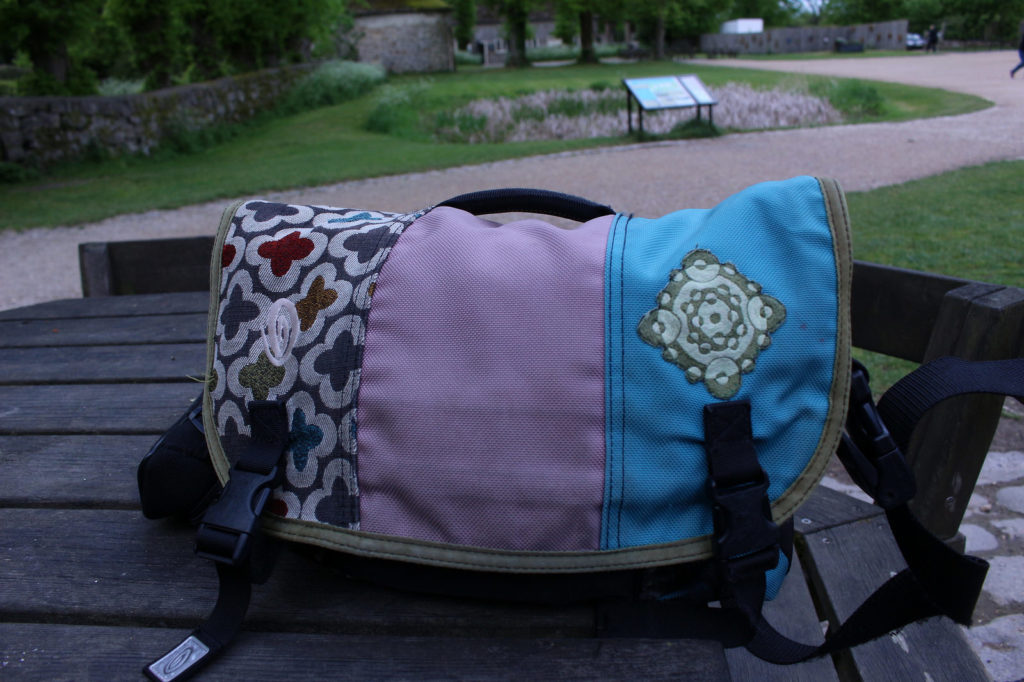 Devizes! Baker B stayed for a week in Devizes in 2013, when Kim and I were in London. We drove through at some point… I think when we went to Stonehenge – and got stopped in traffic so I took iPhone pictures for Baker B. 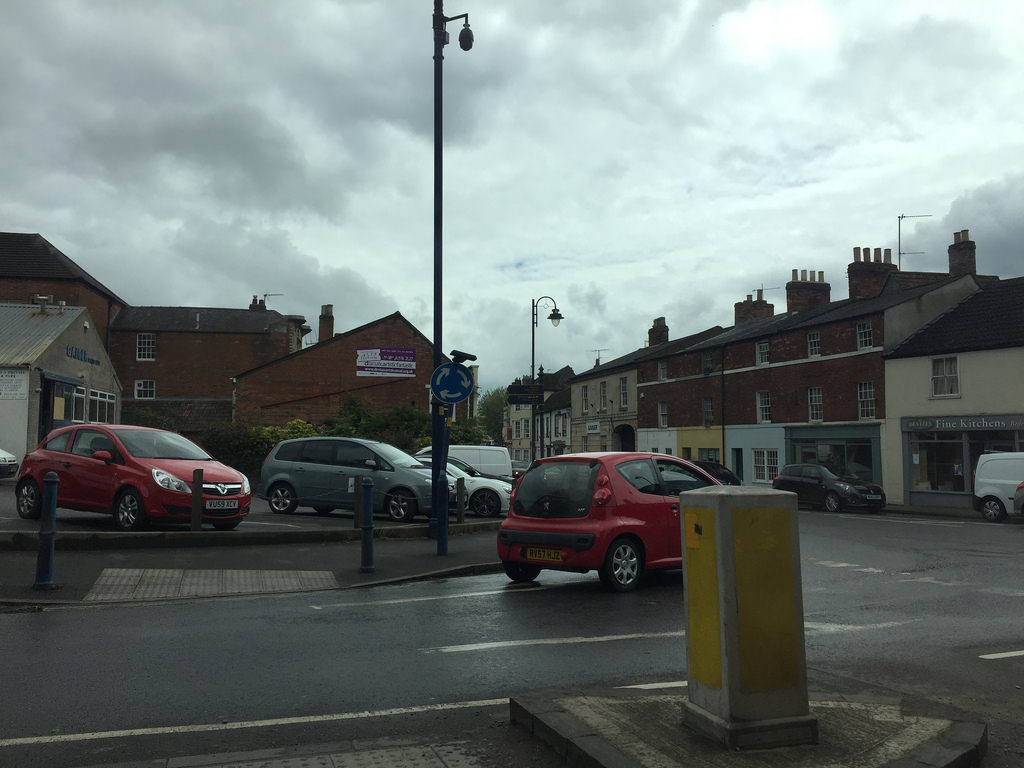 LOL! I don’t remember where this even was now- according to my iPhone info it was near Bath– but it was one of the many pubs we visited. I took it because there was a birthday celebration going on and pretty much everyone in the pub was part of it except us. These ladies were sitting a little bit removed from the main festivities but were clearly related, and some kids brought them birthday cake. 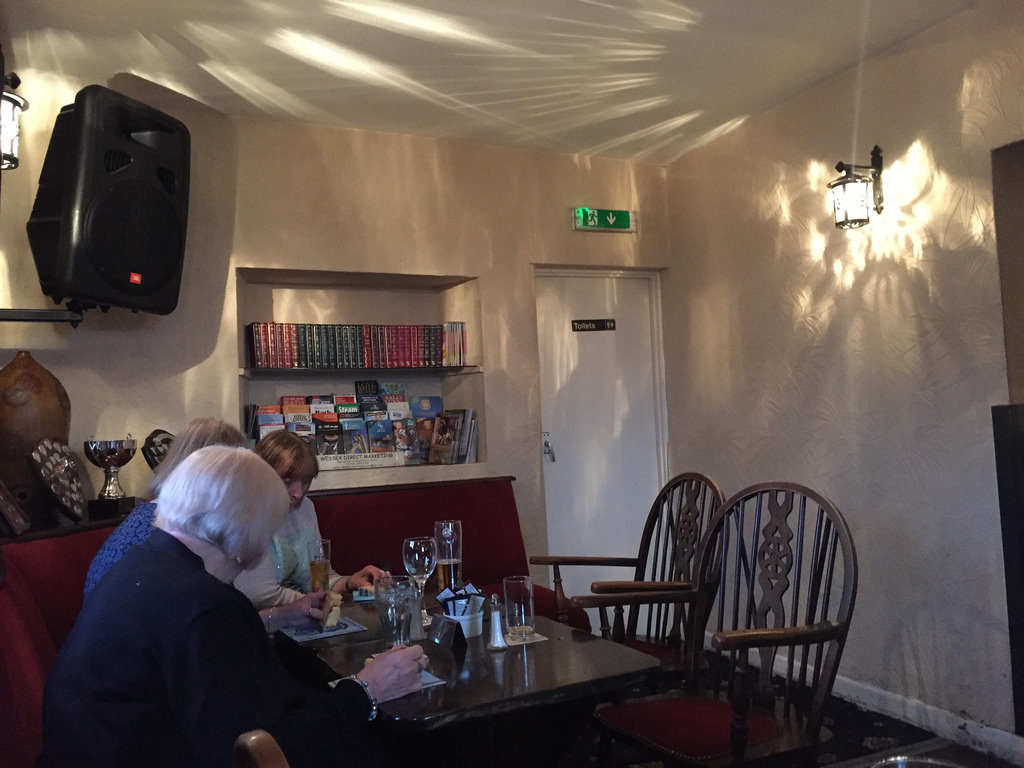 The Who’d Have Thought It pub in Glastonbury. It had all sorts of fun decor, lots of it royalty-related. 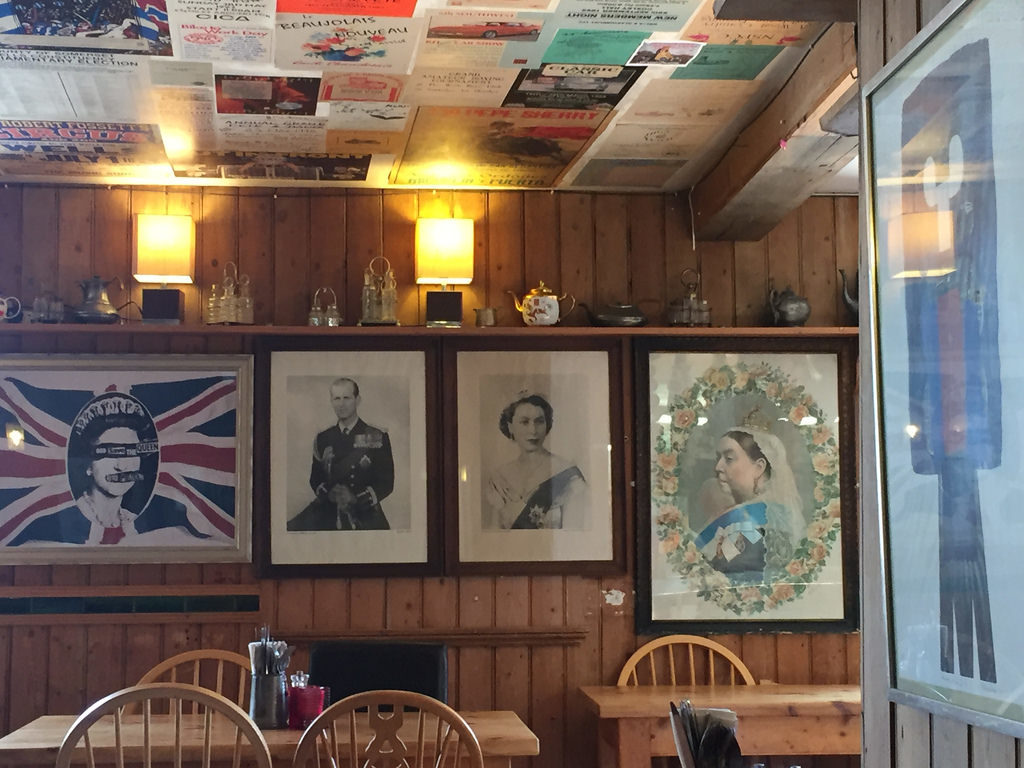 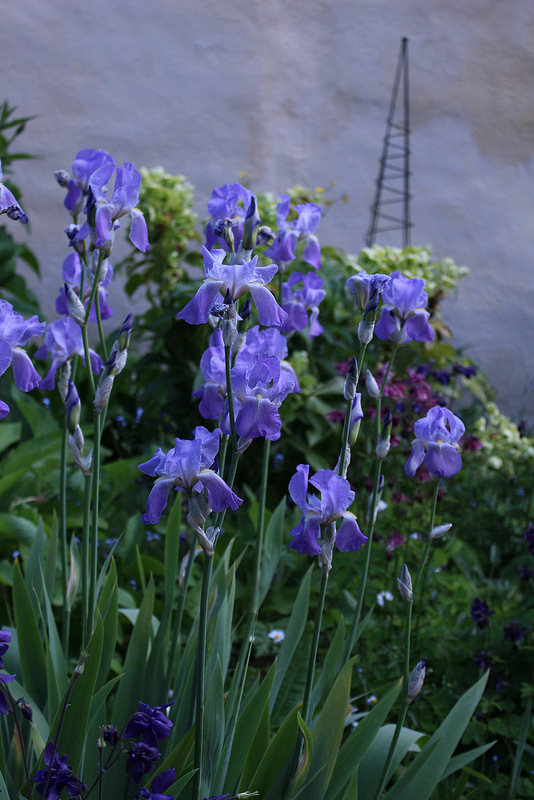 Me in the car, trying to figure out where the hell we were. I think this was the day we were TRYING to find Port Issac, and I’d finally pulled over to look at a map. Vs listening to the Google Maps Bitch Who Hated Us. This was probably after we realized we’d just passed through Wadebridge for the SECOND TIME. 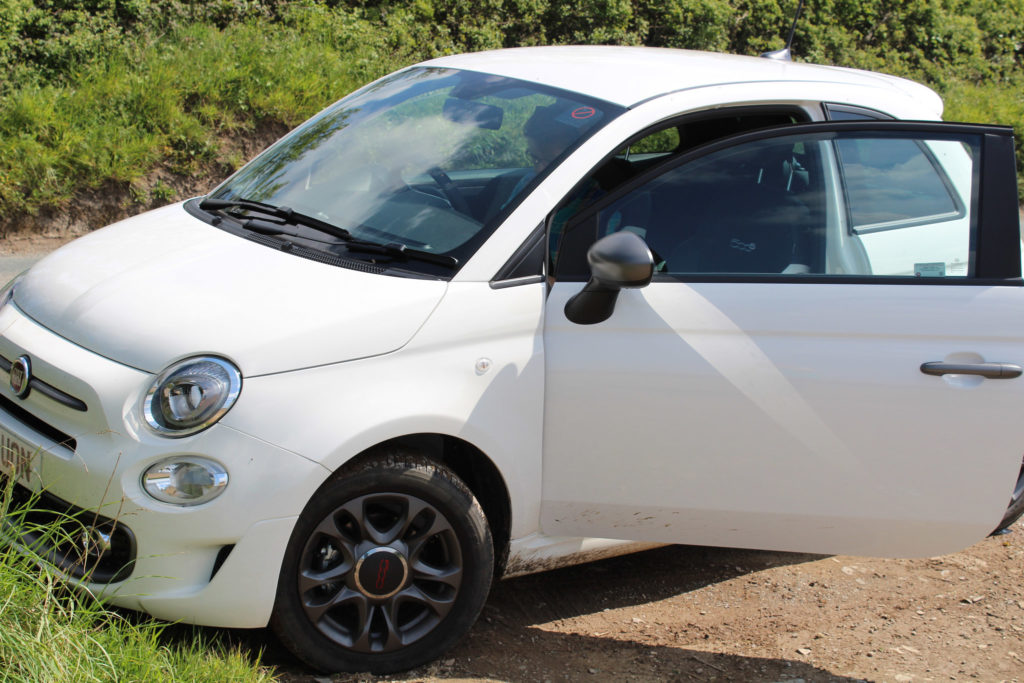 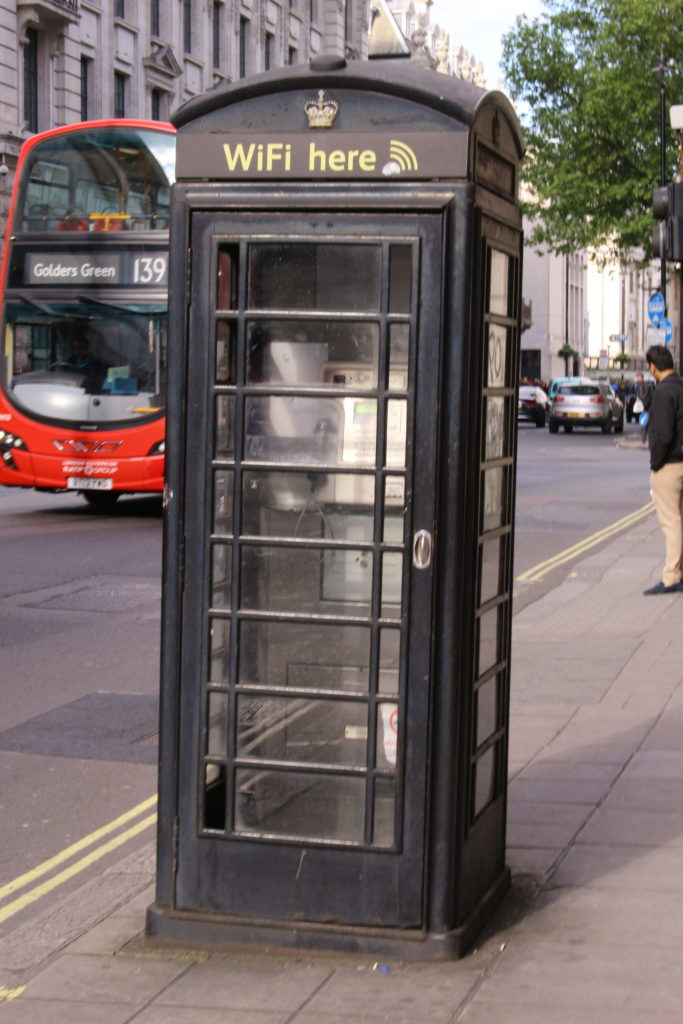 Wow… that is IT. It was a fantastic trip, and I can not WAIT to go back. And next time I will do my travelogue before another year has passed!

David Bowie saying goodbye to us in Heathrow…. 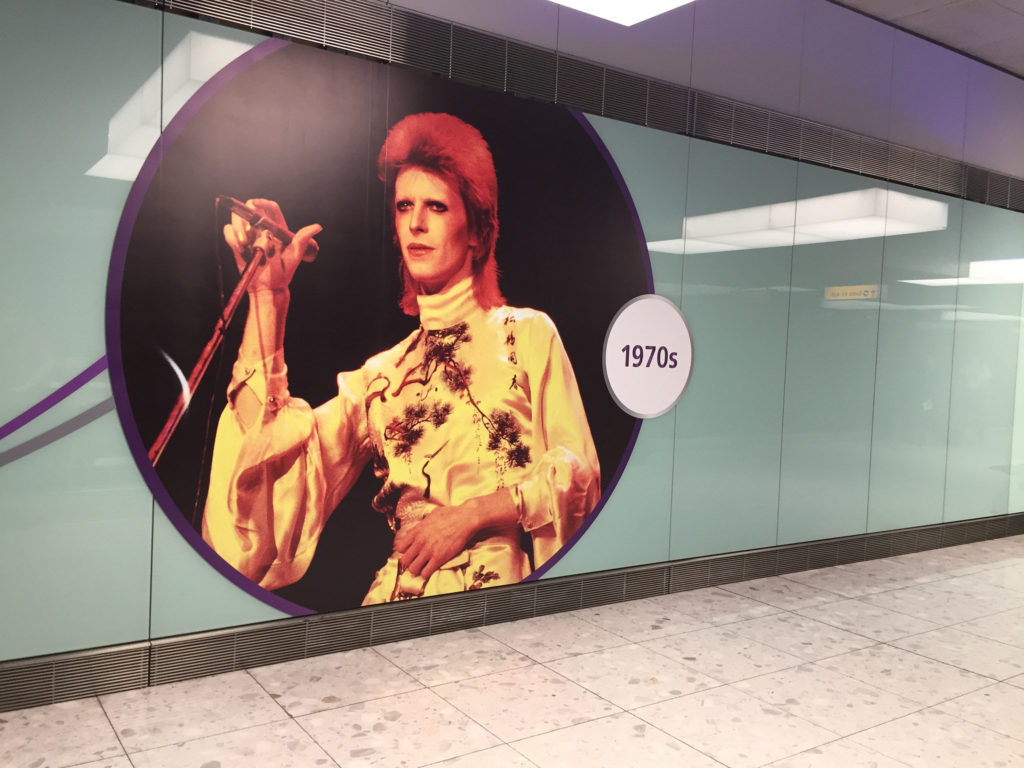 Better late than never! I just returned from London 2 weeks ago and I still haven’t posted the pic I want to FB. It sounds like you had a great time. I totally feel you on the long lines at the airport and I always overpack but I try to at least have the important stuff organized and near me.

@jadeangel It was wonderful! I’m still sorry to be back… a year later. And can’t wait to go again.

And they had great re-purposed phone booths everywhere. I saw one in Bath that is an ATM machine now.

I think now that you’ve caught up, you get to start planning your next trip 🙂  Always a pleasure to go along through your entries!

@satine I think so too!!!! Sadly it will be a few years, but we’re definitely going back.

Wow.  You perservered!  Thank you!  You know, I love being other places, but the older I get the worse I hate the “travel” part.  I need to find a sugar daddy so we can fly first class.  🙂  Oh, wait.  I’m not young enough anymore for a sugar daddy.  Damn!

Anyway, I’m glad you shared.  And sorry it ended on a crumby travel day!

@colanky LOL, wouldn’t first class be fantastic??? I’d be okay with just being able to afford to pay for extra leg-room.

@ednamillion Well, you’re a tall one!

What a wonderful trip you’ve had! Enjoyed reading your journey!

(I don’t think we’ve ever had a pleasant return back into the US! We had a rough time coming back from Mexico last winter, and we are FROM here. It’s so sad when nasty, angry, impatient security and customs people are often the first impression and “welcome” for someone coming to the U.S. for the first time.)

@adagio The first time we went to England, on the return flight we had to change planes at JFK. It was actually hilarious, although maddening, how the second we set foot in the US everyone was surly and rude and we couldn’t figure out where to go and it was awful. Welcome to America! we kept saying.