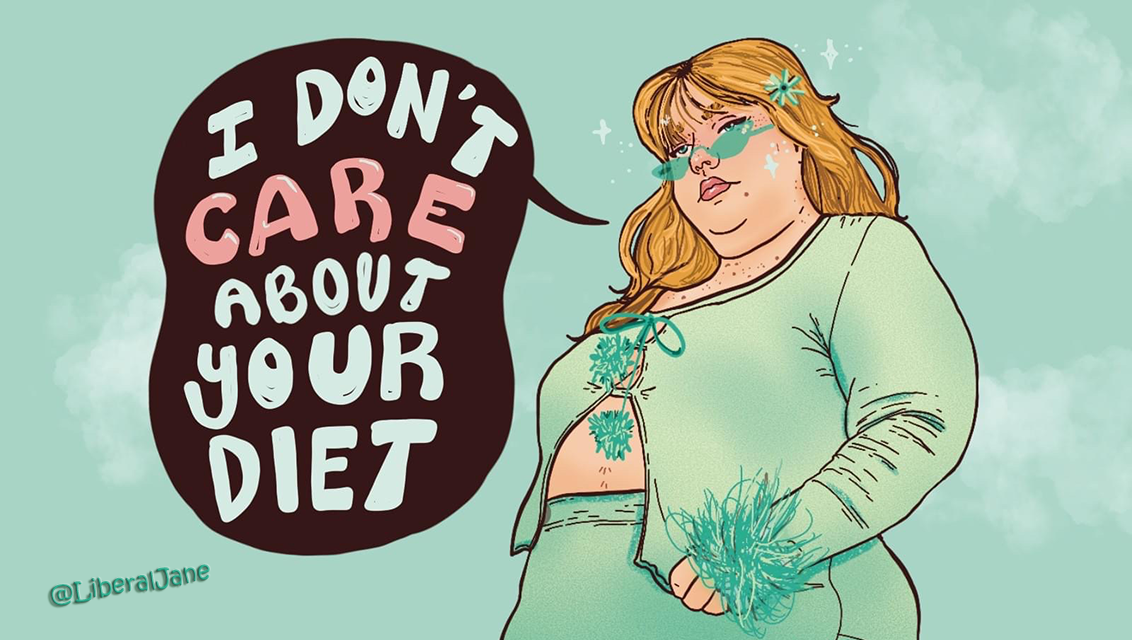 This multi-part entry began with the image above.  I really love this artist and highly recommend you check out her Instagram here.  This particular image came up yesterday.  I was especially moved by it because, in the years since my health turned sour, I’ve had it suggested that my diet could be the issue.  I’ve been given books like “The Liver Cleanse,” by a good friend who was really just trying to help.  Still, it bothers me when people think that they might know more than my doctors or I do about my condition.

This artist hitting this nail on the head in addition to so many body-positive images she’s created moved me to comment, “I adore your work. I’m 51, and almost the heaviest I’ve ever been. But for the first time in my life, I love myself.

A few hours later, I got a notification that people had reacted to my comment. When I checked, there were dozens of hearts, thumbs up, and care emojis.  The artist replied to my comment, and I was feeling pretty good.  And then I noticed all the “😂.”

I really hate that emoji.  I hate that it’s being used as a way to be disrespectful to someone without giving that person the opportunity to respond.

But I really let it roll off.  I’ve come to a place in which I really don’t care what some random, anonymous jerk thinks of me.  But then the comments started coming in.  Apparently these idiots thought that I was saying that I love myself for being the heaviest I’ve ever been.

So I went to a discussion group that I belong to, and posted the following:

My mother had an athlete’s body when she was in high school. She got pregnant with me on her 18th birthday, and the changes to her body were devastating to her sense of worth. Still, she had three more children.
I thought my mother was the most beautiful woman in the world. I couldn’t understand why she wasn’t a movie star. But she always called herself fat. I came to believe that “fat” was just about the worst thing a person could be. I have vivid memories of her wadding up her post-four-babies belly flab and wagging it at me. “Isn’t this disgusting?” she would ask me. I think I was maybe nine years old.
Because Mom called herself fat when she was actually average, I had a very distorted idea of what fat was. Being a military brat and always moving to new schools, Barbie was my best friend, and I always compared my child-body to hers. I remember looking at myself in the mirror after having been too sick to eat for over a week and thinking, “I’m finally skinny.” I was 10.
When I hit puberty, I gained hips and breasts, but all I saw was that the number on the scale was going up. When I needed bigger clothes, I interpreted it as being fat.
And then my home life went to hell. I was having near-constant anxiety, and I turned to food for comfort. I gained ten pounds between my freshman and sophomore years. My guidance counselor told me that I should sign up for aerobics because…. and then he raised his eyebrows while looking me up and down and shaking his head.
By college, I absolutely loathed my body. I had anxiety about food.
I commuted about an hour and a half to college. When my great-grandma got sick, I would stop by the hospital to visit her on my way home. She had always favored me and bragged about me to her friends. On one of my last visits with her, she told me how disappointed she was that I’d gotten fat and lost all my beauty.
My whole life, I have been bombarded with unattainable body images and the products that promise to help you attain them. Once, when I was extremely sick in the hospital, I saw so many Nutrisystem commercials that I can’t see a picture of Marie Osmond nor hear her voice without having a PTSD response.
I could go on and on, but that’s only part of my point. Today, an artist I follow posted this image. I commented, “I adore your work. I’m 51 years old and almost the heaviest I’ve ever been, but for the first time in my life, I love myself.”
Most of the comments and reactions were positive, but dozens of people “

” me. I find that supremely cowardly and childish. If what I have said is that absurd to you, tell me why. Don’t hit and run, you wuss!
There were some general comments about how people who “celebrate” fat women are creating health issues. This is why we’re in an obesity epidemic.
I will never be happy to be fat. But I can be happy and fat. I have a genetic lung condition that may someday require a transplant. I don’t need any extra strain on my breathing with this extra weight. However, exercising with an oxygen tank ain’t exactly a cakewalk.
But I used to determine my value by my waistline. And since it was never as tiny as we were supposed to be in the 80s, I had no value. I compensated by excelling at everything I tried. I got good grades, I went to college (first woman in my family to graduate college), etc.
It wasn’t until my health went bad that I realized that my value had nothing to do with my body. I was in my early forties, had been incorrectly diagnosed with metastatic ovarian cancer (it was actually a combination of an ovarian abscess and my as yet undiagnosed immune disorder), was sick as I’ve ever been, had lost my job, and was struggling to hold on to my house.
That’s when gifts and donations and genuine love came out of the woodwork. Young people whom I’d taught or just befriended were bringing me groceries, washing my dogs, taking care of my yard. Every day, I would go to my mailbox and find cards and gifts and offers to make dinner, etc., from friends and family. A woman I’d gone to high school with but hadn’t seen since graduation sent me two fifty-pound bags of dog food for my babies! So much generosity! So much love. Even though I was fat.
A few years later, I met the man of my dreams. He treats me like a goddess. He likes me as I am and also wants to help me be healthier.
So when I say happy and fat, I’m not saying that I like being overweight. I’m saying that I don’t assess my value by my BMI. Those people who love me are some of the most amazing people I know. And if they love me, I must be pretty ok, too.
TL;DR: If someone is not obsessed with losing weight but you think they should be, it’s none of your business. Don’t be a dick. But if you’re going to be a dick, at least have the ovaries to say it instead of dropping a

This morning, when I woke, I found my inbox brimming with reactions and comments.  The response was amazing.  So many women shared that they needed to hear this.  They realized how their impressions of themselves affect their daughters.

It really was a high for me.  This is precisely why I share my struggles so freely.  I know that others will relate, and I feel like it’s my contribution to making the world a better place. 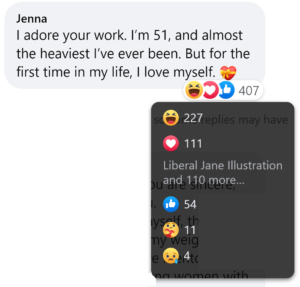 But then I saw this.

Seeing that the number of laughing emojis was twice the number of love emojis, and then reading the hateful comments of people making judgements about me based on that and my profile picture (which is my favorite picture of my fiancé and me) was just deflating to me.  “You should be ashamed.”  “That’s disgusting.”  “Enjoy your diabetes.”

It really got me down.  And that made me feel worse.  I love myself.  I’m bullet proof.  Trolls don’t affect me.  Why was this affecting me?

So then I had to run some errands.  I always do my best thinking in the car or in the shower, so I was thinking about why I felt so down.    What I finally realized was that seeing all that ugliness killed my high!   So what I was experiencing was a crash.

Now I’m back to being excited about the response I got to my post.  I’m thinking of creating my own page/site/whatever to address these kinds of topics along with other things I like to roll around in my brain.  Thoughts?

I’m exhausted and I have a doctor’s appointment in the morning.  Good night.

You’re a wonderful person, Jenna. You have endured a lot in your life. Those who know you, they love you. I am glad to hear that you love yourself. Also, if you want I will give you some tips on dealing with trolls online.

I agree with Heffay. You are a wonderful person. It doesn’t help anybody to just laugh at and mock them. My mother was the same when I was growing up, and it creates such a horrendous sense of self-hatred. As though food is something to hate and fear, and “fat” literally the worst thing in the universe. I really hope the doctor’s appointment goes well.

The message you give is strong.  Not letting people steal your joy is even stronger.  😎

Just know that if you do start a page (not saying don’t) you WILL be attacked and you will be attacked mightily by the trolls who just wait to hurl hurt at strangers. Unsolicited advice for health conditions is insane. I went on steroids to calm an MS flare down and was told by other MS patients how OMG all the terrible things it would do to me. 100 mg in total over 5 days. A group I had really loved went feral on me and I no longer read nor post there. One said to take tumeric for my flare… uh huh. Right. If you have the moxie to stand up to the wave of haters, by all means GO FOR IT! I’ve just seen some folks I really respect nearly succumb to the hate. Be gentle to my friend. I love her.