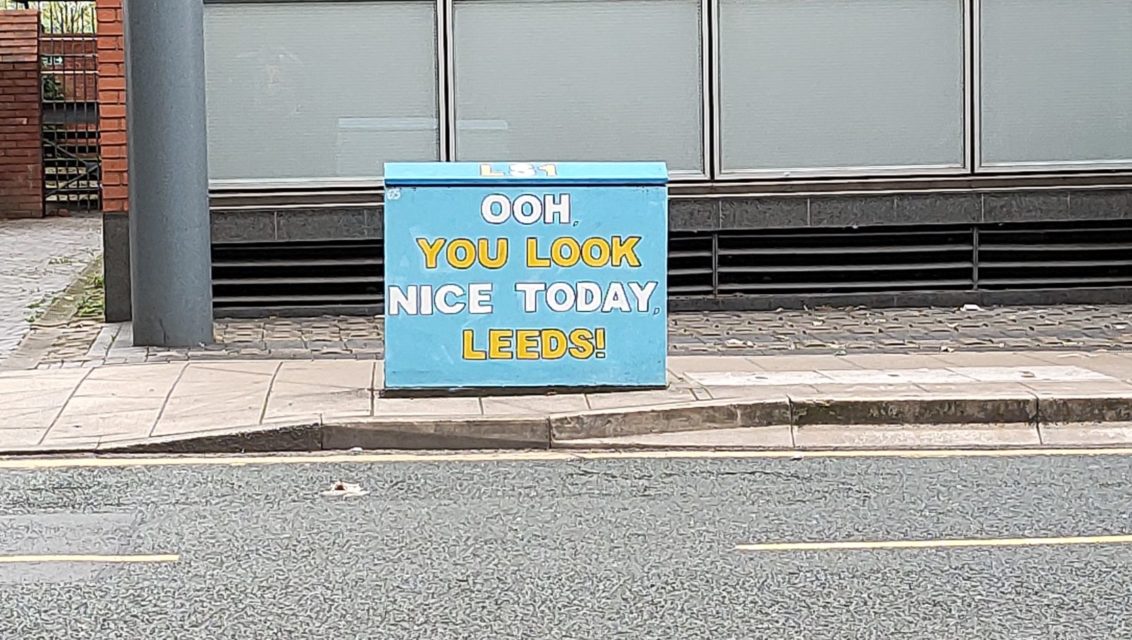 I got the train and went to Leeds.  I was worried about how long it would take me to find the hotel.  Turns out I didn’t need to, it was about 10 minutes from the train station.  I checked in, went to my room, had a shower and headed out again.

I went for a wander round town.  I was looking for one place and found it.  Apart from that, I just wandered, found my way round, took pictures of pianos and dinosaurs, stuff like that.  I had a couple of pints, then headed off to see Mark Thomas.

Thomas is a stand up comedian who does political stuff.  Very left wing.  One thing he did for TV was set up a Catholic girls school as arms dealers.

He was absolutely hilarious.  I really enjoyed the show.  I was part of it.  He was doing a bit about the fact that England doesn’t have a national anthem and asked if anyone had any suggestions.  So, I suggested Flower of Scotland.  Because, what better anthem for England than a song about how Scotland beat them in battle?  After the show, I got him to sign my copy of his latest book and I got a picture with him: 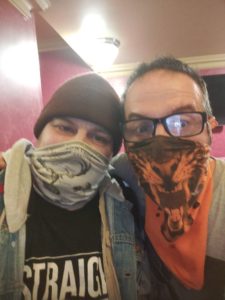 Had another couple of pints, then back to the hotel.

Saturday was Slam Dunk day.  I got up and headed to the bus, which picked up closer than I though.  On the bus, I listened to a playlist of one hit wonders.  I walked down to the entrance, showed my vaccine pass, showed my ticket and got a locker for my bag.  Then, I waited.

They opened to doors and I decided to go get merchandise early.  Everyone will be heading to the stages to get a good place, it’ll be quiet, right?  Here’s the queue I joined:

When I finally got there, I got a Frank Turner t shirt, a tie dye Slam Dunk t shirt and a Punk in Drublic t shirt.  Then I headed off to see my first band.

Now, one of the bands I was looking forward to was Days N Daze.  Unfortunately, they had to cancel as they’d be flying in from a red list country and would have to quarantine.  So, I went to see their replacement, a ska band called Buster Shuffles.  They were absolutely brilliant.  Here’s one of their songs:

I put my t shirts in my locker and had a look around the site.  Then, I went back to the Punk in Drublic stage where I caught the end of The Baboon Show’s set.  They are a Swedish rock band, with all that implies.  I stayed there, because I wanted to be on the barrier for an upcoming act.  As a result, I saw Snuff, who were excellent (warning, NSFW language):

I should mention that in between sets, there was a DJ.  Who was wearing a tweed suit and bow tie.  As you do:

Next was Capdown.  A punk/ska band that I’m kind of disappointed I had never heard of before.  The lead singer went a bit too hard and fucked his leg.  Here’s one of their songs:

Next was Frank Turner and the Sleeping Souls.  Yes, that’s who I was hanging out at the barrier for.  They were absolutely brilliant, as usual.  Not sure how much security appreciated Frank encouraging crowd surfing.  The whole set was a huge communal moment.  Here’s one of the songs:

(If you pause at 2:06, you can see me in my denim hoodie hybrid jacket and a baseball cap.)

I went for a wander to one of the wifi hotspots and checked stuff online.  I got myself a Slam Dunk baseball cap and a poster.  Not having anything else to do, I went back to the Punk in Drublic stage and caught The Skints.  They are a ska/reggae/punk band and they are absolutely the find of the fest for me.  I am now a huge fan.  Here they are:

I stuck around for Anti-Flag, who I wanted to see purely because of a t shirt I saw someone wearing:

I listened to a bit of The Alkaline Trio, just enough to discover they’re not my thing, got my stuff from the locker and headed to the bus.

I first off all decided to wander round town, then I remembered reading about Britains oldest working train station.  What does every 43 year old need the day after being on his feet at a music festival the day before?  That’s right, an hour long walk!

I got to the train station and bought a ticket for the train.  A steam train:

It took me to a park.  I walked through the woods and it turned out it was literally a lake and a visitors centre.  I put The Skints on and headed back through the woods, got the train back, got a bus to the hotel and crashed.  I then decided to go see Shang-Chu (which is excellent).

I checked out of the hotel, wandered round town and got the train home.

Overall, I had a great time.  It was a much needed break.

I didn’t know England doesn’t have a national anthem. I guess I just assumed it was “God Save the Queen” (or King, depending).

I think your suggestion is hilarious.