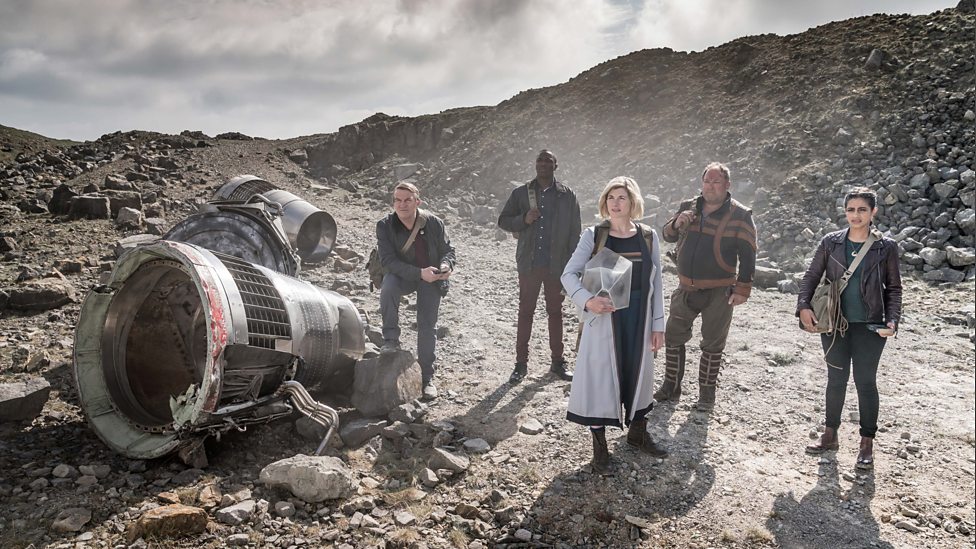 Synopsis: the Doctor picks up 9 distress signals from the same area on the same planet, where she meets an old foe…

So, we can add a series long story arc to the list of things that Chris Chibnall cannot write for Doctor Who.  That was utterly pathetic.  And that’s before we get to the fact that the Stenza in general and Tim Shaw in particular is nowhere near strong enough to work in this way.

This episode also featured a threat to Earth.  It was the first time I can remember where I could not have been less bothered about the danger the Earth was in.

Graham was good, the storyline with him and Ryan went where it was always kinda headed.  But I didn’t really buy his “I’m gonna kill him, LOL I’m not” thing.

I’ll give Yaz about the same amount of attention as the script.

Mark Addy was good.  The character really wasn’t.  He was just there to be a tour guide and remember things.

If your story has the exact same basic plot as another, much better story you might not want to reference that one.  Just saying.

This would have made a semi decent filler episode.  Sadly, it was the series finale.  It just didn’t work.  As with a couple of other Chibnall scribed episodes it had some god ideas that he did nothing with.  Why mention the planet messing with peoples minds and the need for the neural inhibitors if you’re not going to do anything with that?  All the planet seemed to do was slightly confuse the Doctor and give Yaz a headache.  Was it worth bothering with the inhibitors then?

And now for the series review.

It’s been a real mixed series.  One episode is amongst the very best the show has ever done (Rosa).  A couple have been very, very good (Demon in the Punjab, It Takes You Away).  One was just a solid, fun episode (Kerblam!).  One was forgettable (The Witchfinder).  A couple would have been passable if not for their place in the series (The Woman Who Fell to Earth, The Battle of Ranskoor Av Kolos).  One was poor (The Ghost Monument) and the other two are amongst the worst the show has ever been (Arachnids in the UK, The Tsuranga Conundrum).

It’s sadly clear where the shows problem lies.  Look at the last five episodes on that list.  The one uniting factor behind the scenes is that they were all solely written by Chris Chibnall.  Now, I’ve said before that I wasn’t exactly thrilled when it was announced he was taking over from Steven Moffat as I wasn’t a fan of his previous episodes, but I was willing to give him a chance.

Well, the jury is in and he’s just not cutting it.  He’s really not.  If the BBC were to announce tomorrow that the delay in broadcasting the next series (it won’t air until 2020) is because he’s out it wouldn’t bother me at all.

His defenders will tell you that he focussed on characterisation, but that hasn’t been apparent either.  Not even the Doctor has been that well drawn.  Graham is good, but that’s as much to do with Bradley Walsh being a good actor than anything in the script.  Ryan has dyspraxia, until it’s ignored most of the series.  Beyond that, all his characterisation came from Graham.  Yaz can safely be removed from the entire series with only minor changes needed.  Including the two episodes that were supposed to showcase her.

He did do some tings right.  He did, after all, green light the episodes I liked or loved and is credited with co writing Rosa (though it’s obvious that Malorie Blackman did the heavy lifting in that script) and he both chose Segun Akinola to replace Murray Gold as the shows composer and went with the most gorgeous version of the shows theme since it returned.

But none of that is good enough.  If they would let him work behind the scenes and hired a head writer who could, y’know, write the show well, that might work.  But him writing most of the episodes just doesn’t.

The bad guy was sure ugly…