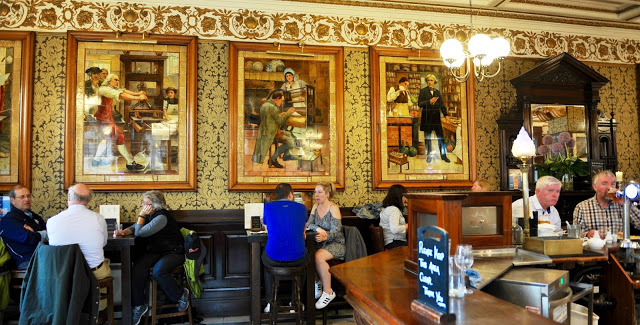 At university, we called our local establishment The Fisted Peasant, which was a much more engaging name than the all-too-common Red Lion with which it was saddled.  Given the Town-vs-Gown relations, our name made a pretty direct territorial claim on the establishment.  I recall a rather artistic student who even designed a sign using our moniker, which, alas, was not adopted by the landlord in the interests of good taste.  It was, however, brilliant, and well-executed.  I wonder whatever became of it?

Alternate pub names are nothing new.  The ‘Eagle and Child‘ (famous for hosting the ‘Inklings’ meetings of Oxford writers during the 1940’s and 50’s) is also known as the ‘Bird and Brat‘, ‘Fowl and Foetus‘ or the ‘Bustard and Bastard‘.

To this day, those of us who remember it will often inquire if someone would like a cocktail by asking, “Fancy a pint at The Fisted Peasant?”