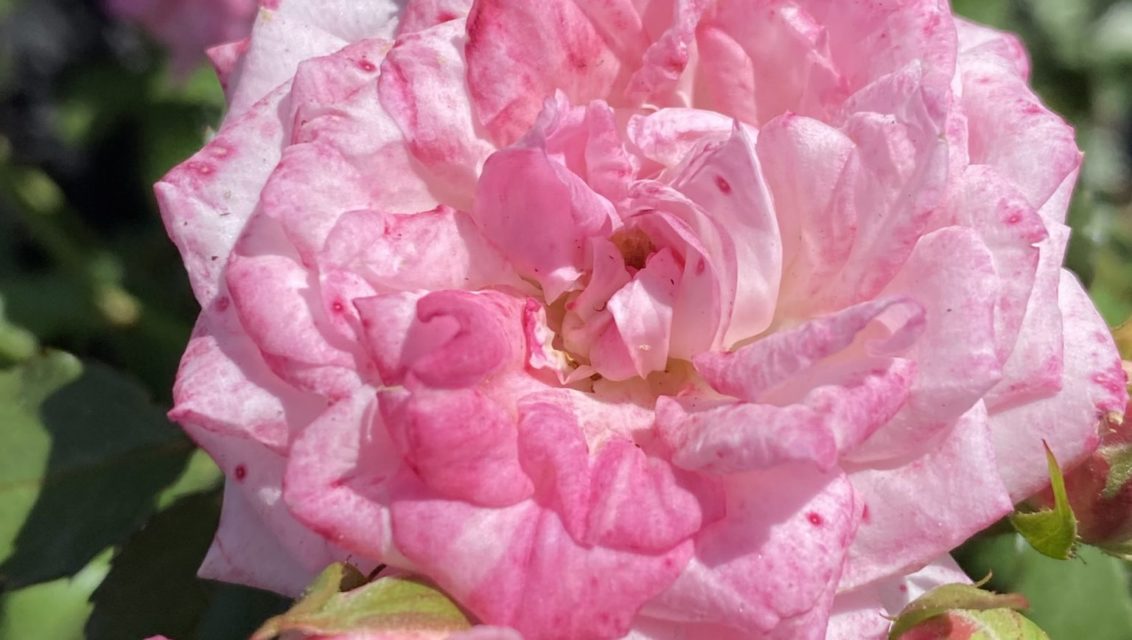 I honestly expected my pyschobitch neighbor to come over with hellfire and damnation this evening after we had the house pressure washed this afternoon since some of the water sprayed over onto her back patio… quite a bit actually.  Not that the guy who did it or anyone else can control which way the water will blow when the wind is blowing and with water is traveling at a high velocity.  And it is actually in the covenants that we have to have our houses pressure washed every year… so also unavoidable.  But she is a renter so she won’t have hers done.  But what did she do.. she trimmed ONE of her front bushes and re-angled her birdhouse camera on her front porch so it lines up with our front yard so you can see as we exit our stoop area… What the serious fuck!?!

So we were planning on doing it anyways, because it was chilly tonight and because it is supposed to storm like a mother tomorrow and tomorrow night, we had a bonfire tonight in backyard… she sits back there every single night with her shower curtain around her porch…(You’ll see what I mean cause as reluctant as I am to call my dog in the backyard when she is out because of her “alert dogs” *read undertrained, aggressive dogs*… I let Tigger out anyways just before we came in so he could spend some time with us after our 17 year old decided he wanted to turn in for the night.

But when we started off the evening, I was still a little pissy to be honest and so I took my iPhone out and chose a few select Eminem songs off my playlist, passive aggressive… a bit… but I don’t care… and did it piss her off… I hope so.  Because the way she reacted yesterday *technically still yesterday… but by the time I post this it won’t be… but the way she behaved and on my birthday no less was out of line.  Screaming over a sprinkler getting a little bit of water over the fence and you’ll see how close the houses are so some of that is unavoidable… okay… we live in a damn subdivisions or God’s sake… and then yelling at my husband to come at her and hit her… What the fuck.. and then as she put her trashcan out calling us stalkers and then saying “Go ahead and go through my trash” SERIOUSLY lady you are unhinged…. why the fuck would I want to dig through your nasty ass trash? On top off all that you whip out your cell phone and start recording the argument mid argument after YOU started it like a Karen… get bent.

But I promised pictures of El Tigger… 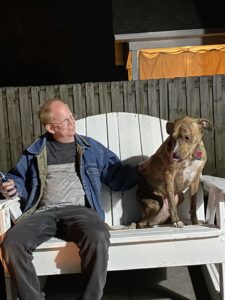 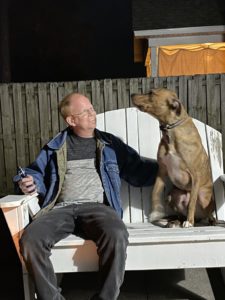 This is my husband and Tigger getting what my son lovingly calls “Bench Time”… my son will go out back and sit on there and Tigger will sit with him… As you can see she has a “Privacy barrier” around her patio… That is an outright shower curtain my dears… and as you can also see the houses are pretty damn close… so though my husband has the sprinkler set to only hit our yard.. any wind will blow some water over… this is what she had a shit fit over…cause she has these storage boxes by the fence… all along the fence..her backyard has so many of them it’s unreal…we hear her moving them around all the damn time… it is fucking annoying.  And now one of them has a tarp over it.  I’m thinking that’s what pissed her off if that’s the case move it away from the damn fence.  *yes we vape* 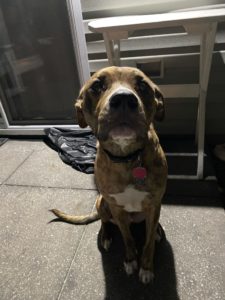 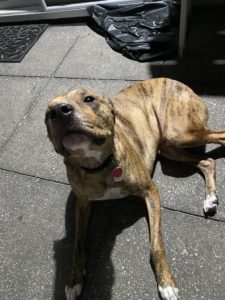 These were Tigger sitting then laying next to the white chair I was sitting in…. You can see the Pit in him I don’t know if you can see the Whippet… you can tell with his epic calmness and super quiet nature…. He is the most chill dog I have ever known…. And ever so polite….Honestly I was not worried he was going to go to the fence and mess with her dogs, I was worried her dogs were going to be let out and start getting aggressive with him… I dread letting him outside.  Hell I dread opening my slider and now .. oh yeah she accused us now the day before yesterday but we will stick with yesterday (the 22nd)… that we are provoking her dogs…What the hell lady.. your dogs are aggressive… own it. The fucking wind provokes them. 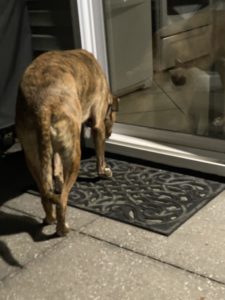 Inseparable buddies….I don’t know if you can see Fred inside the kitchen on the other side of the slider…. waiting patiently for his pal to be let back inside….and Tigger also wanting to go back in… which he did along with me.. by this point the fire was pretty much out.

My thing with the lady is … look….you don’t want to poke a disabled veteran with PTSD…especially one that hasn’t gotten an ounce of therapy from the VA in over a year and some change now because the VA stopped following up with her when Covid hit.  And so she gave up on them…. it happens you break my trust I don’t gain it back so easy…. so two things have happened with this situation.. I’m both on edge in two ways…she has my anxiety levels through the roof and she pissed me off…. I want to stone her fucking house except it isn’t her fucking house.. I want to shred her shower curtains but she has cameras everywhere…the woman is absolutely batshit and probably is in need of a good lay.  Except I don’t know if anyone would want to hit that to be quite honest….

I look at other women and I wouldn’t hit that, Not even if you put on bag on her head.  And its not just her looks (yes she has resting bitch face)…but her personality sucks….

Look it’s pretty simple… if some of our sprinkler water got on your house or whatever… coming over with your hands on your hips and yelling isn’t the best way to approach that situation… if you want to talk to your neighbor about something like that try “Hey, I don’t know if you realized it but your sprinkler overshot your yard a little and got some of my property a little wet.. I don’t know if your water pressure was high or if your sprinkler needs adjusted do you think you could check it next time you set it?”…. and then totally different outcome…. guaranteed!

But when you come over aggressive (note: Dogs mirror their owners btw)… then you are going to get a negative outcome from that… and then if you get me involved and I’m not in a passive mood… hold onto your panties bitch… especially if you start accusing my husband of some shit I know he didn’t do cause the fucking walls in these houses are fucking thin and I heard every god damn word.

Yes I’m still on about it…. It’s the damn camera re-angling.. that really has me upset.

This is why I like playing Animal Crossing…. my neighbors on the game are always just so nice to me…. and never give me hell…. and they aren’t people they are animals… (except you have that shady art dealer).

Let’s change the subject… I had an echocardiogram today…. pretty sure it was normal.. to me it looked normal (I watched most of it)… (In case you didn’t know I was a cardiopulmonary technician in the Air Force)…. I might have missed something…. I had other things on my mind… then on Monday I have to go to Dental to get more fillings done… then on Tuesday I get my second covid vaccine (Moderna)… I’ll let you know how that goes also.

Hopefully tomorrow’s storms don’t get too dicey…. I didn’t do my core workout this afternoon, my back has been achy today.  I didn’t want to throw it out…But we did do our week’s grocery shopping.

I did Linguini with Sun-dried tomato and pesto sauce (8pts on WW).  I made the sauce myself with sundried tomatoes that were rehydrated in boiling water, garlic, basil, red pepper flakes and a half a cup of the parmesan cheese you buy in the pasta aisle, about a cup of the water I used to rehydrate the tomatoes and some salt…. and then regular linguini…. reserving some pasta water (about 3/4 a cup) to mix into it after the pasta was done cooking.  Its as quite yummy. (1 serving was 1 cup).

I put the recipe like that cause it was actually so super simple….even if you aren’t on a diet give it a try… the red pepper flakes give it a pop of heat.. but you can omit them and you never have to buy jarred sun dried tomato and pesto sauce ago (buy the sun dried tomatoes that are in the bags..not in the oil) and I use the freeze dried basil you find in the herb section since I often have a hard time finding basil…. but as fresh as you can get it…NOT the dried herb basil in the spice section *It makes a difference* and you add the to taste honestly… I don’t measure out the free ingredients or spices…. you are supposed to measure out the salt….I add a bit more cause I have to with the POTS and all… and I used truffle salt just cause I like it…

I do try to share the recipe of whatever I’ve made for dinner each night…they are weight watcher’s recipe but I promise you they are are super delicious I would not have made it this long on WW if they were not.

My featured picture is of my dwarf roses I took with my iPhone….I hope you like it.

Until next time… I need to see if my watch is charged.