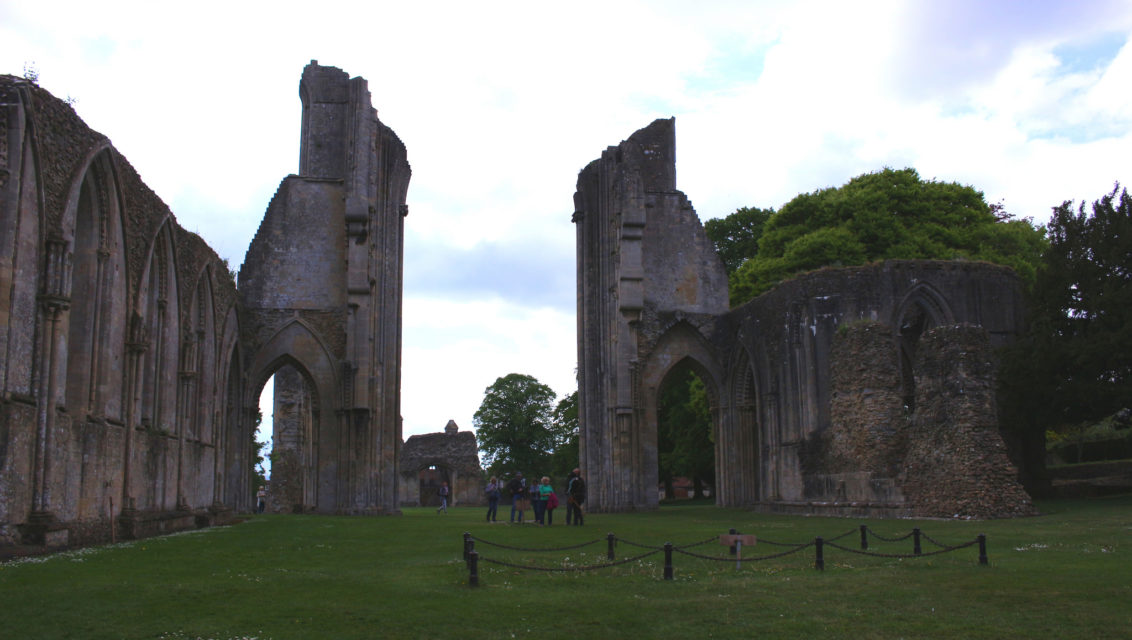 Clearly I AM capable of making more than one entry every six months– maybe when I’m done spitting these England ones out, I will remember that. And make one more than one entry every six months. I may actually finish England this week!! It’s really helping that I have exactly nothing to do at work. Next week I will be overloaded, so this is very good timing. (LOL, I was trying to make this one gargantuan entry with the Abbey and the Tor, but after realizing 19,323 pictures in one entry might be a little, ummm, much- – I’ve split it into two. And added even more pictures. You’re welcome.)

SO. Glastonbury, Day Two. Which did not immediately follow Glastonbury, Day One (Monday, May 8, 2017). In reality, we went to Stonehenge on Tuesday May 9 and back to Bath for the second time Wednesday May 10. The second Glastonbury Day was Thursday May 11. No, it’s not confusing at all! It seems like grouping these entries by location is easier. Maybe.

Anyhow, back we went on Thursday May 11 to Glastonbury. We also planned to drive back through the Cheddar Gorge, which is a stunning limestone gorge in the adorably-named Mendip Hills Area of Natural Beauty, and would be a reasonable side-trip. Well, it looks reasonable. In reality it would probably take us fifteen hours. As it turned out, though, we spent way longer than planned in Glastonbury, because Kim wanted to go see … .a shaman!

This actually isn’t as weird as it sounds, since Kim is taking courses to become a Healing Touch practitioner. That also isn’t as weird as it sounds- Healing Touch is an accredited program for learning to use energy from touch, and is approved by the American Nurses Credentialing Center. The VA is fine with nurses using it on patients (I think they have to be careful not to get TOO new agey and avoid things like using pendulums), and if I’m not mistaken they paid for Kim’s classes. She’s still in the program; she got sidelined by her knee issues but is still working on her certification. My point being, Kim was able to use the visit to the psychic and the visit to the shaman as part of the research/documentation that she has to do for certification. So it was an investment!

The Bridget Healing Center is right off the High Street in Glastonbury. Kim saw the sign, and REALLY wanted to have a session. She’d never been to a shaman, and it’s not something you run across every day. And I insisted she do it – and practically had to shove her into his… office?? Whatever shamans work out of – because as I said in my last entry, she always goes along with whatever everyone else wants to do, especially if she’s afraid she’s going to inconvenience someone by actually doing what SHE wants to. I finally convinced her that I was not going to be at all inconvenienced, and we could go to Cheddar Gorge another time. Sadly we ended up not having time to go, but we’ll do it on a future trip.

As it turned out she had to wait at least an hour for an appointment, so we went to Glastonbury Abbey, which was right around the corner. OMG, it is amazing — it’s the ruins of an absolutely enormous abbey that was founded in the 7th century. The original building burned down in 1184, but was rebuilt almost immediately and was one of the most powerful monasteries in England by the 14th century. Kind of amusingly, pilgrim visits started falling off in the mid 1100s, until the monks found the site of King Arthur and Queen Guinevere’s tombs in 1191. Or possibly they concocted a publicity stunt for raising funds. It worked – Glastonbury is still King Arthur Crazed. Then Henry VIII dissolved the monasteries in 1536, and that was the end of the abbey. The last abbot, Richard Whiting, was hanged, drawn and quartered as a traitor on top on Glastonbury Tor in 1539.

The ruins are just astonishing. It’s a huge area, and the walls of part of the abbey are still standing, with broken-off areas where parts of the wall have fallen. The whole thing is like 37 acres, so there was lots of room to wander around. And the grounds are surrounded by a big stone wall, so you can’t see it from the street, except for the really tall bits. There’s also an excellent museum and gift shop. We went in the museum and then walked around the ruins till Kim had to leave for her Shaman Appointment. I stayed at the Abbey and walked around by myself, taking a million pictures. 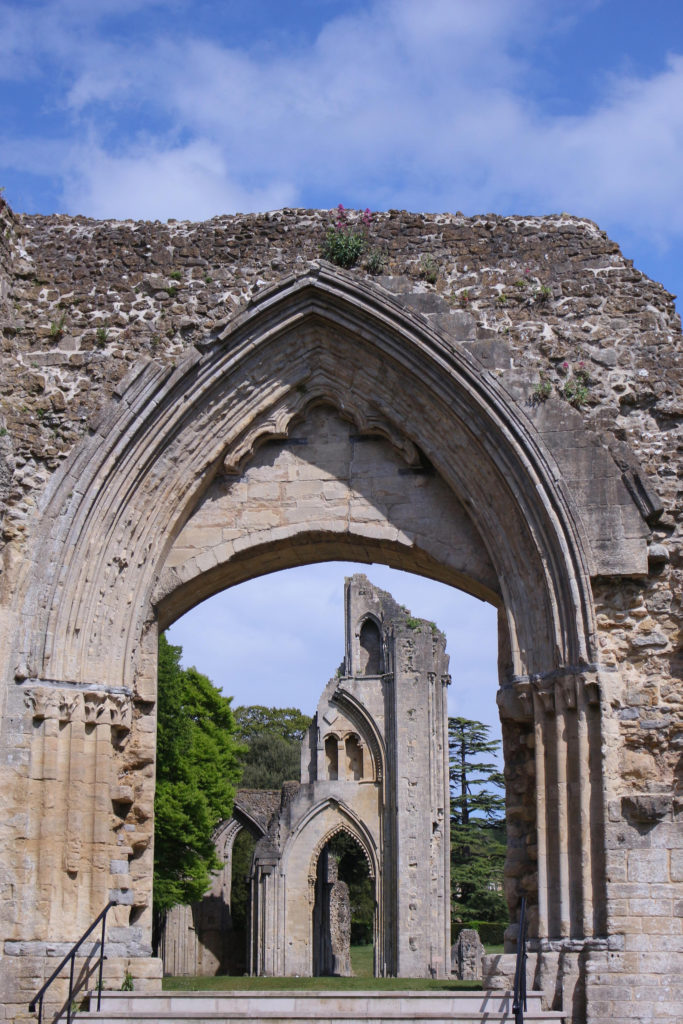 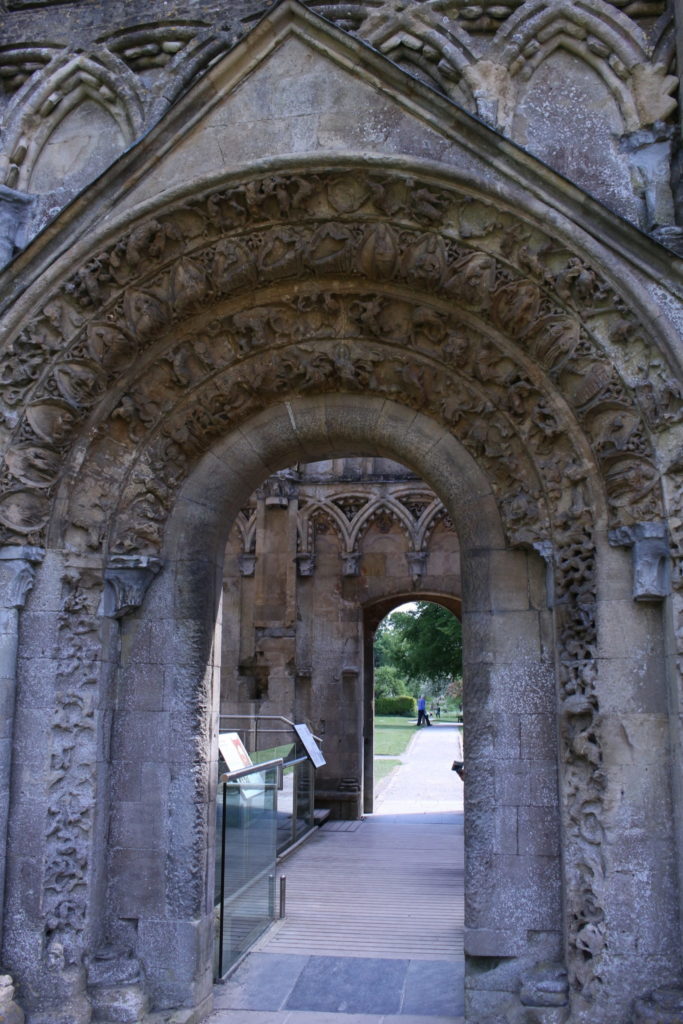 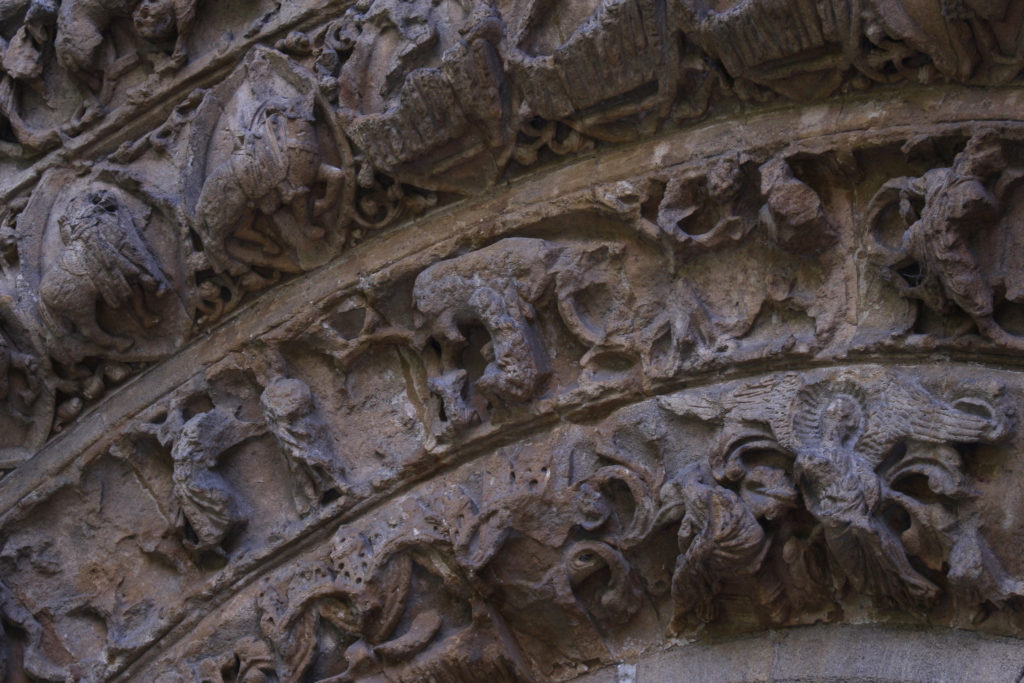 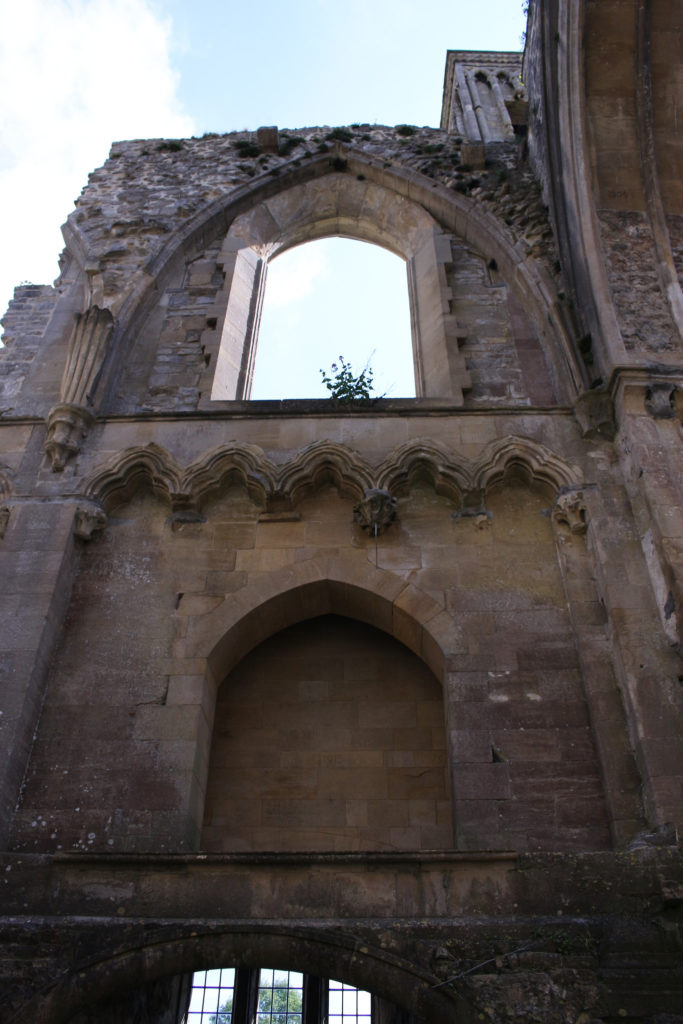 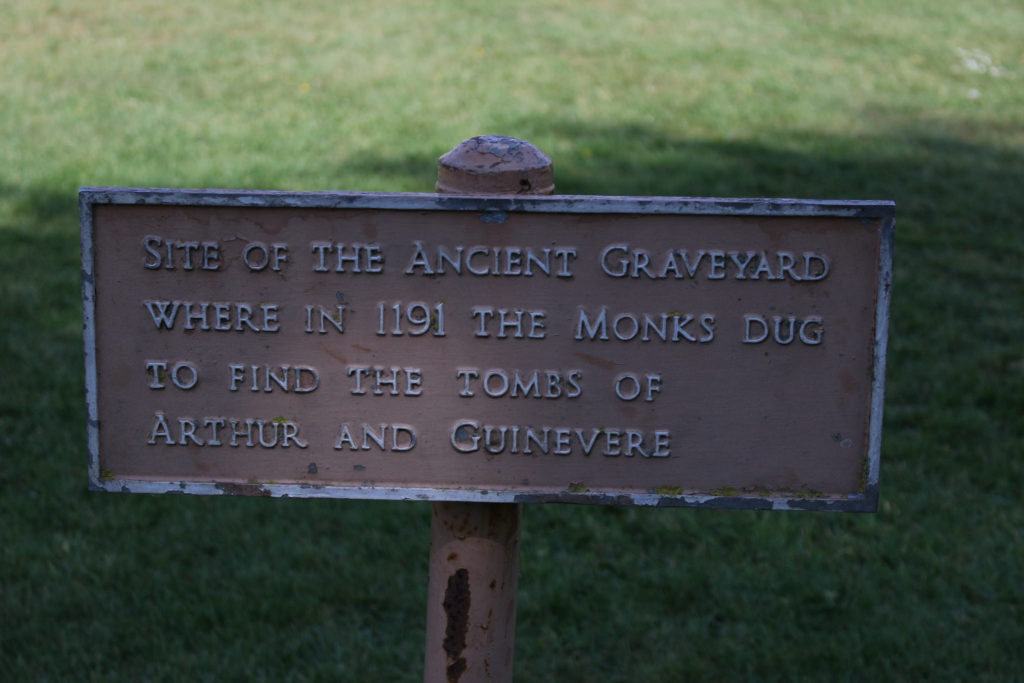 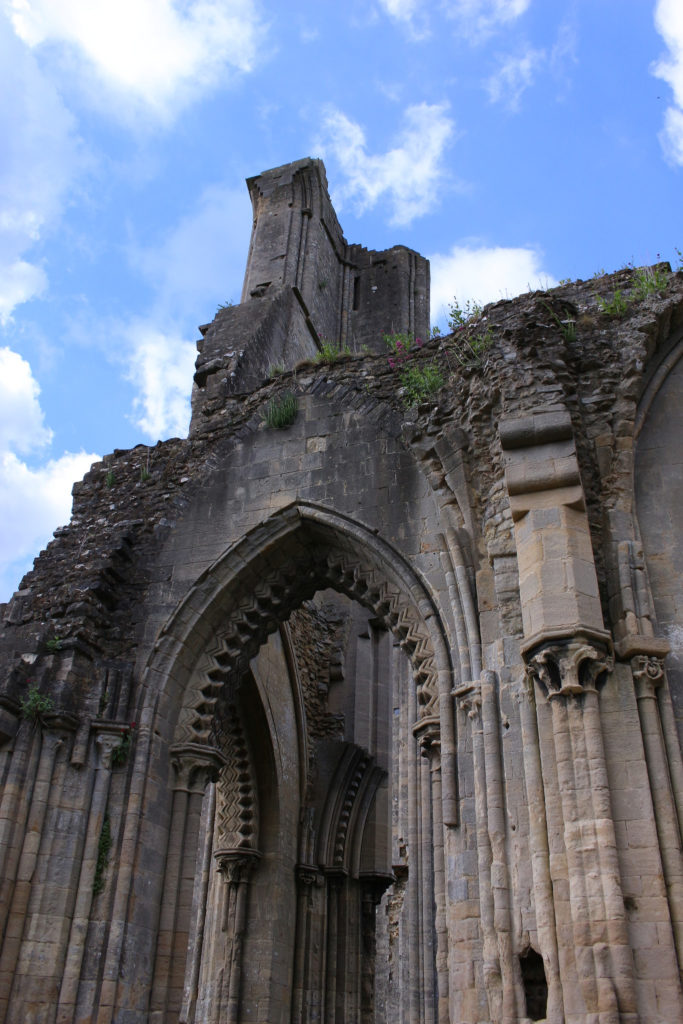 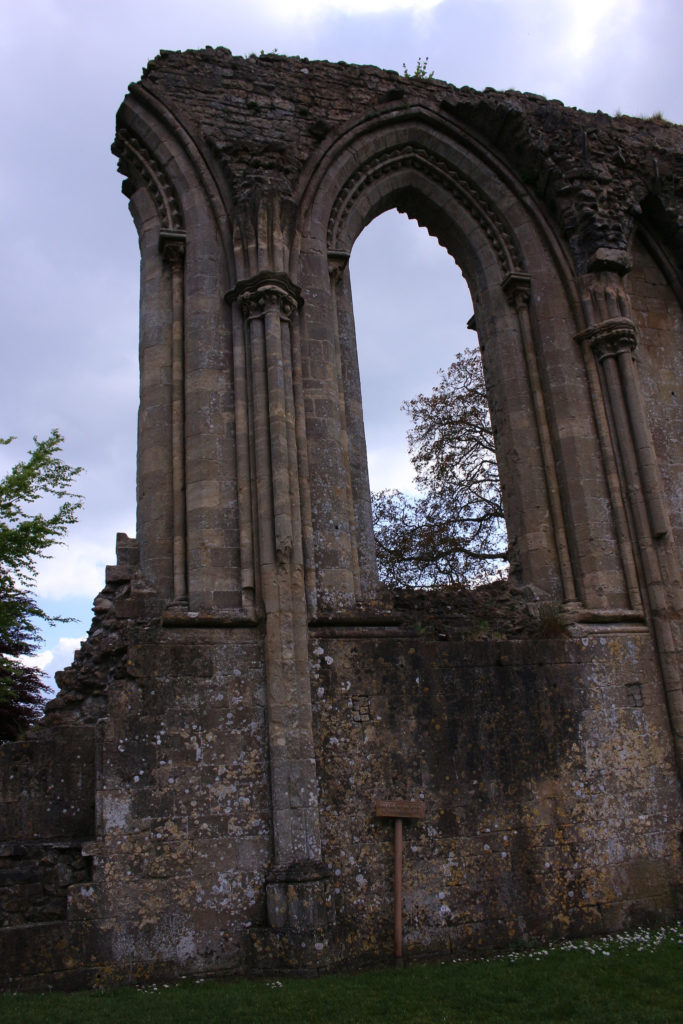 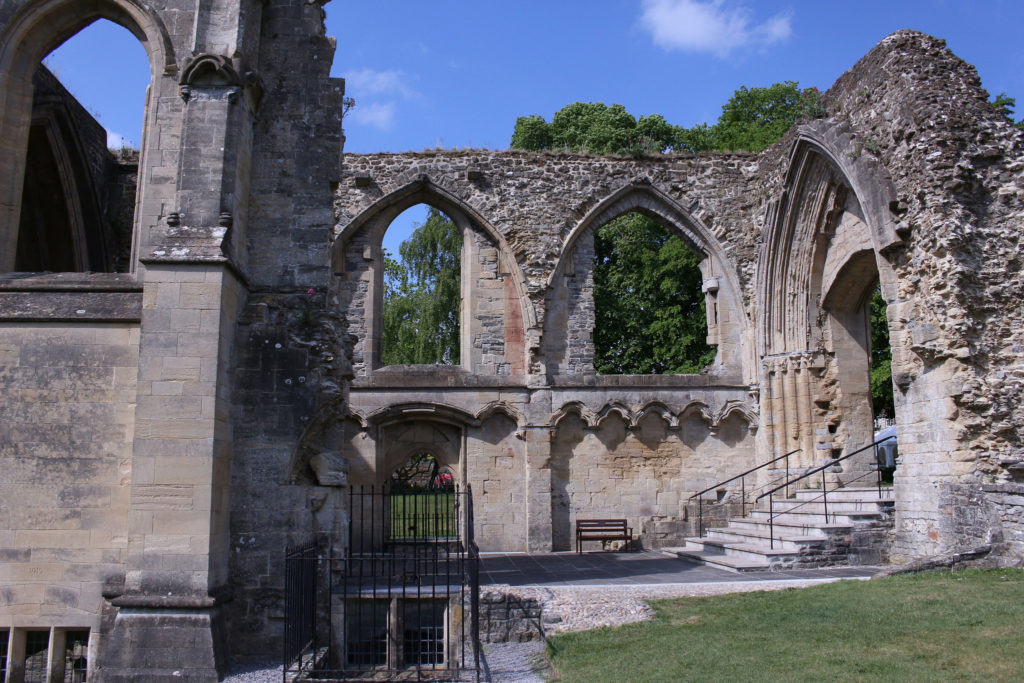 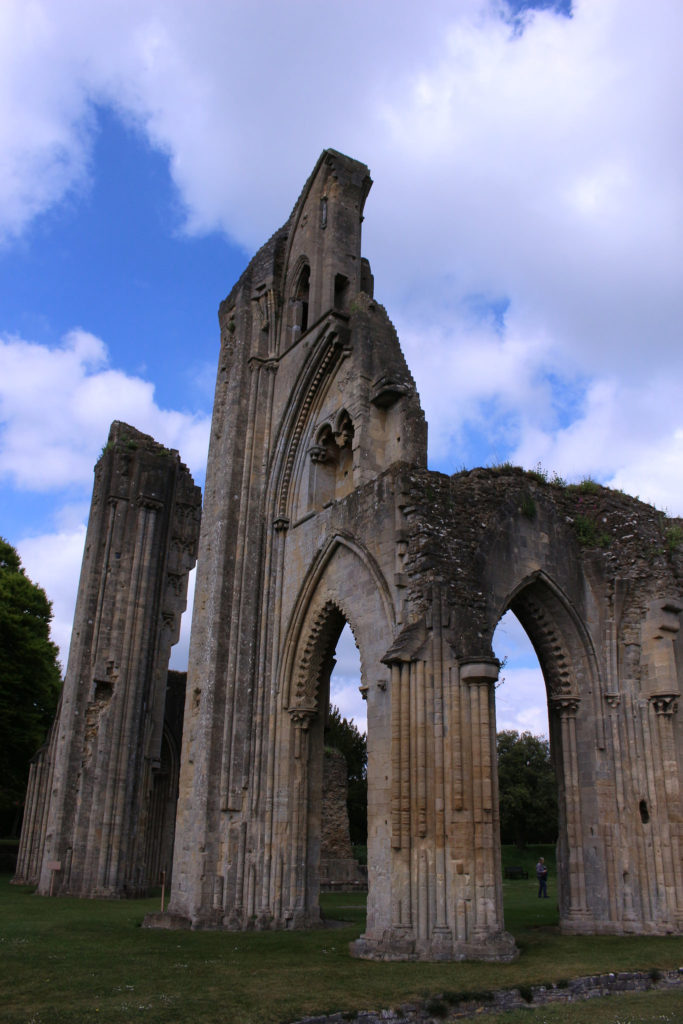 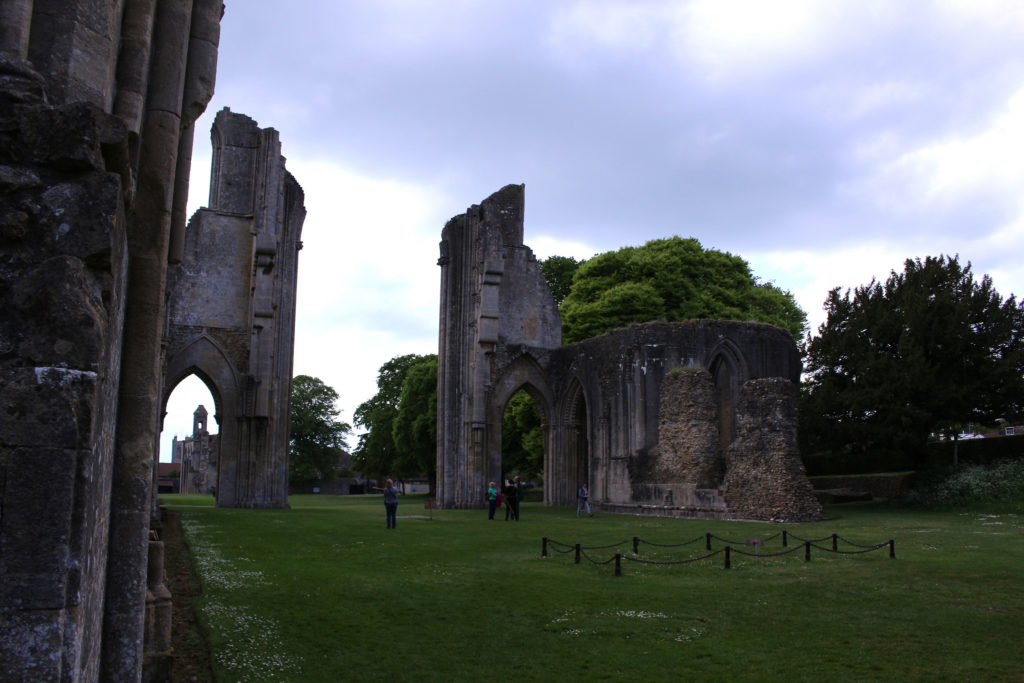 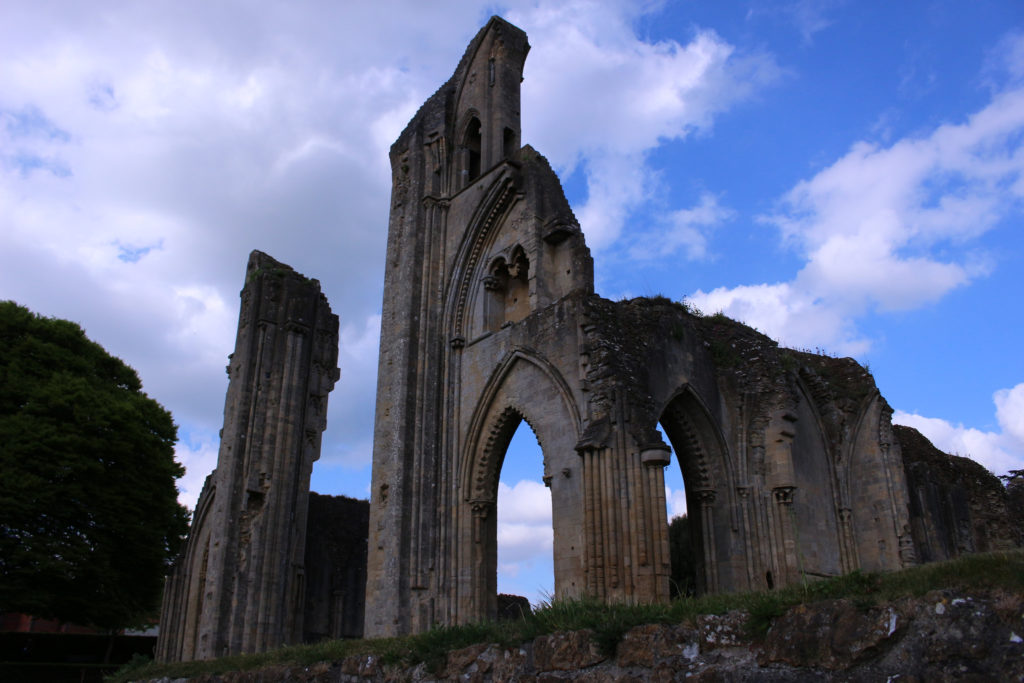 And then I bought a beer at the refreshment area and hung out at a picnic table for awhile, writing in my journal and soaking in the abbey. Until I got too cold to keep sitting there and had to walk around some more. It was a beautiful day, but a little chilly. 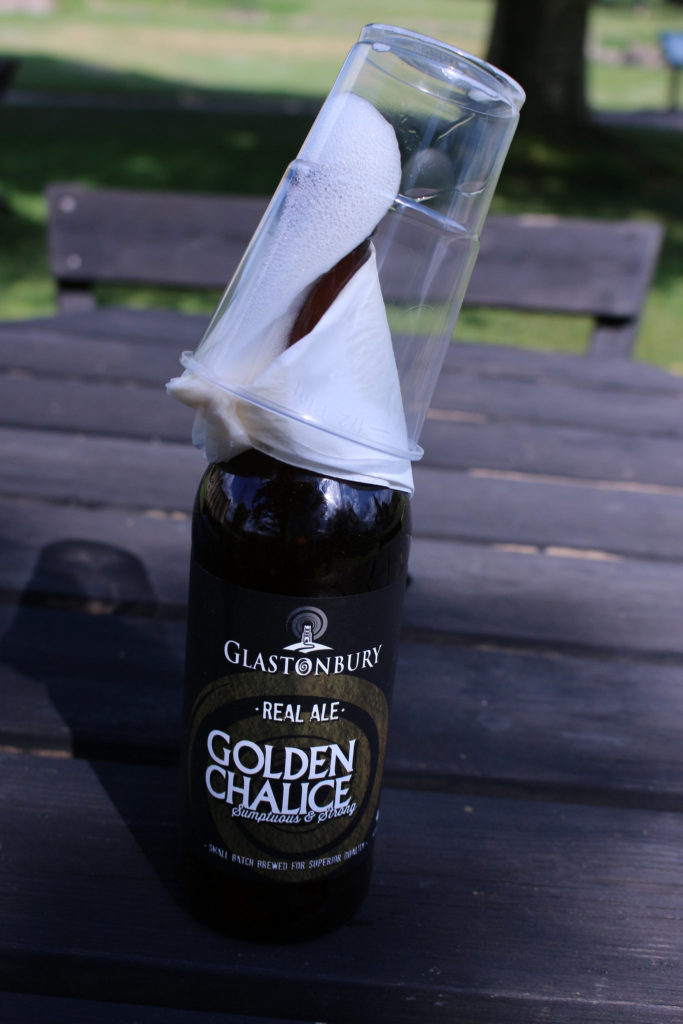 The Abbot’s Kitchen – one of the best preserved medieval kitchens in Europe. The inside has been reconstructed so you can pretend you’re a medieval abbey dweller. 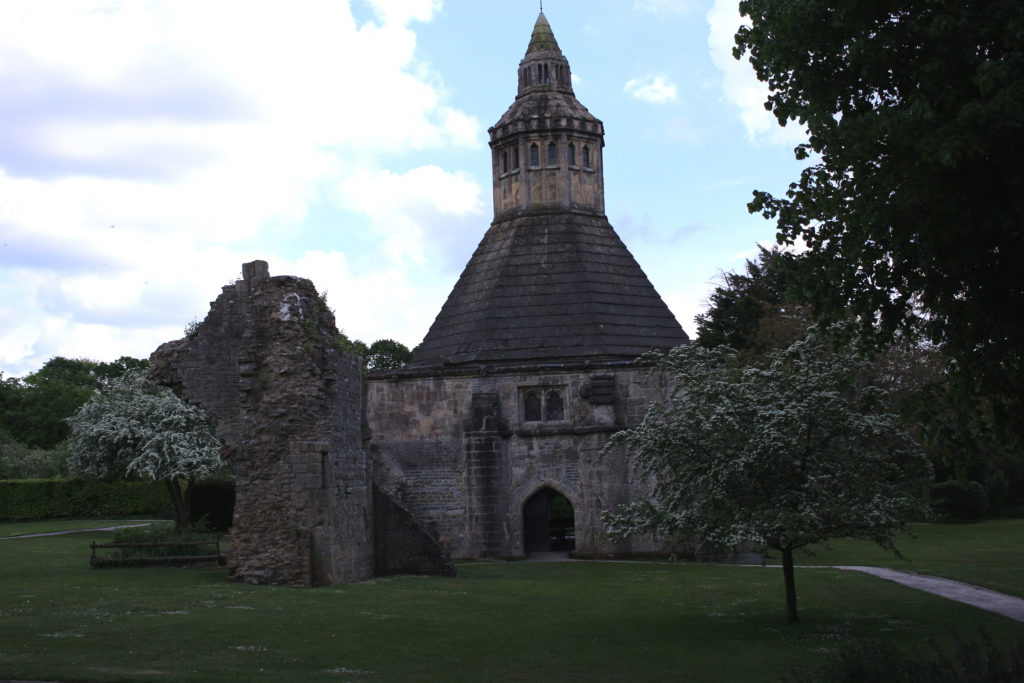 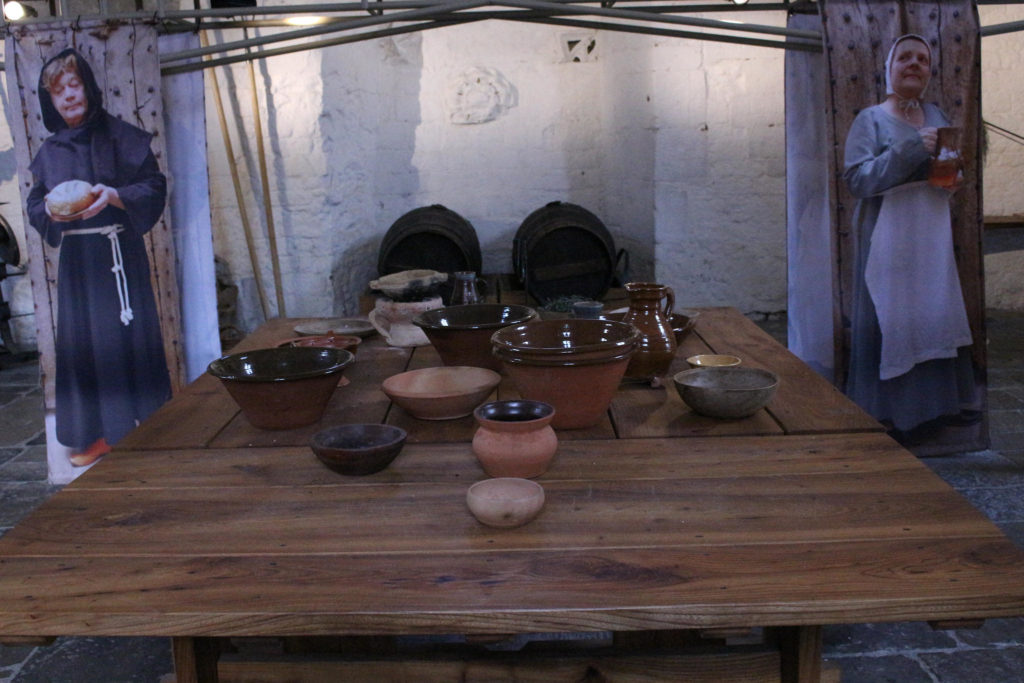 These two people were just printouts, but looked weirdly realistic. For two-dimensional beings. 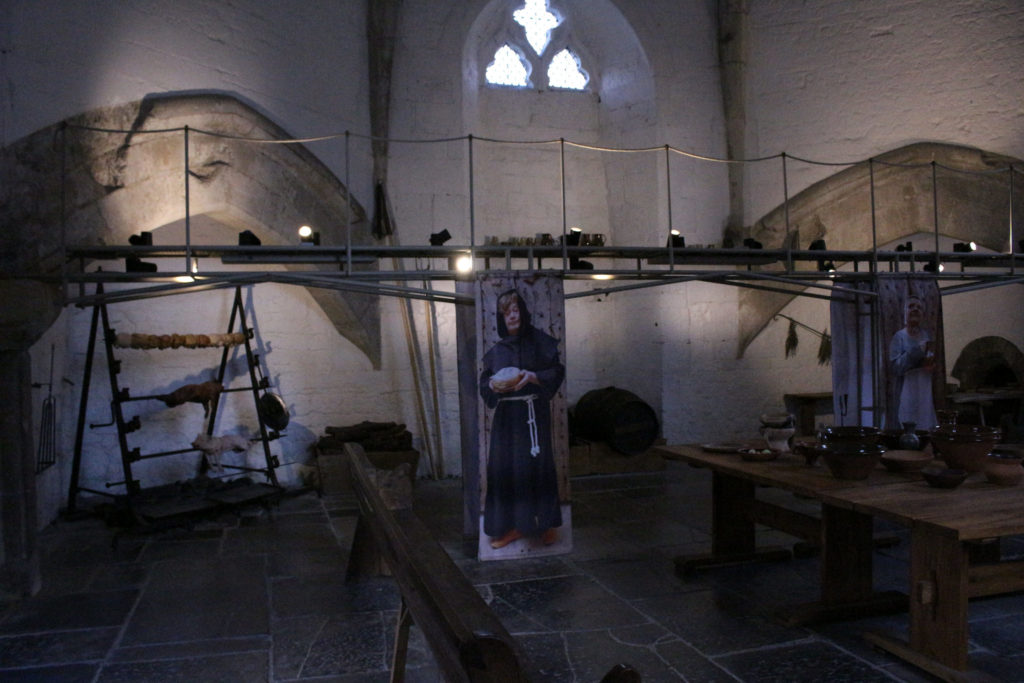 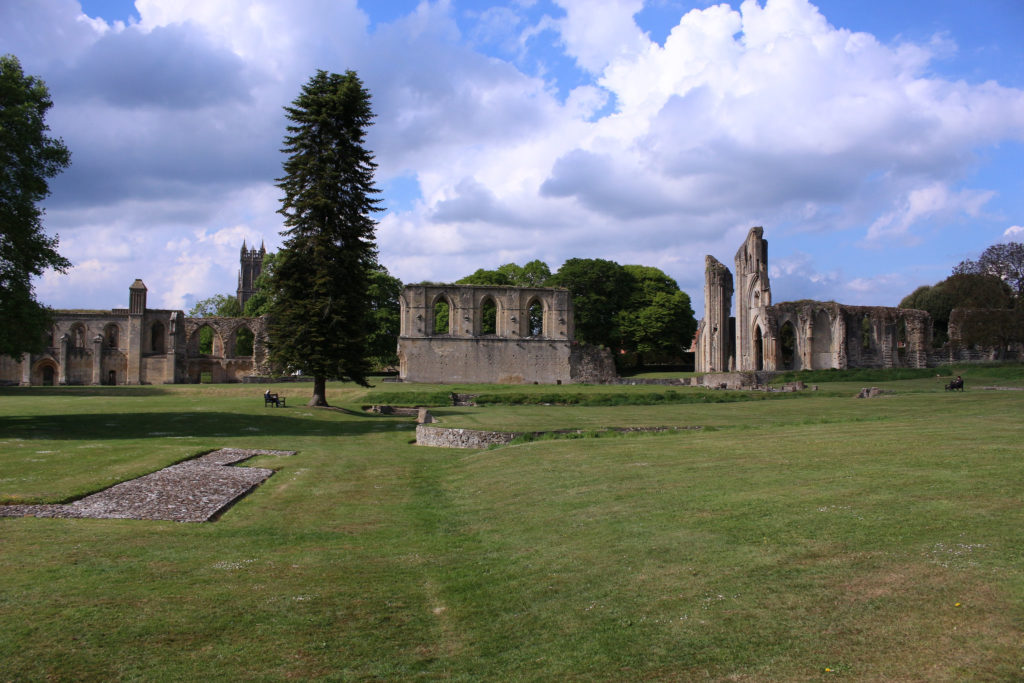 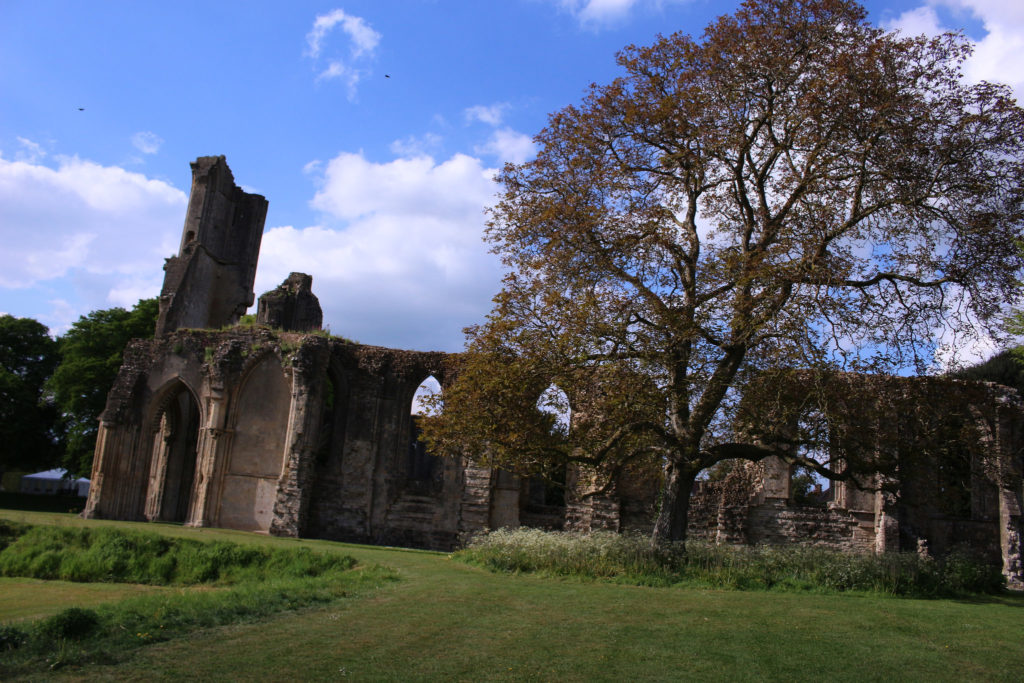 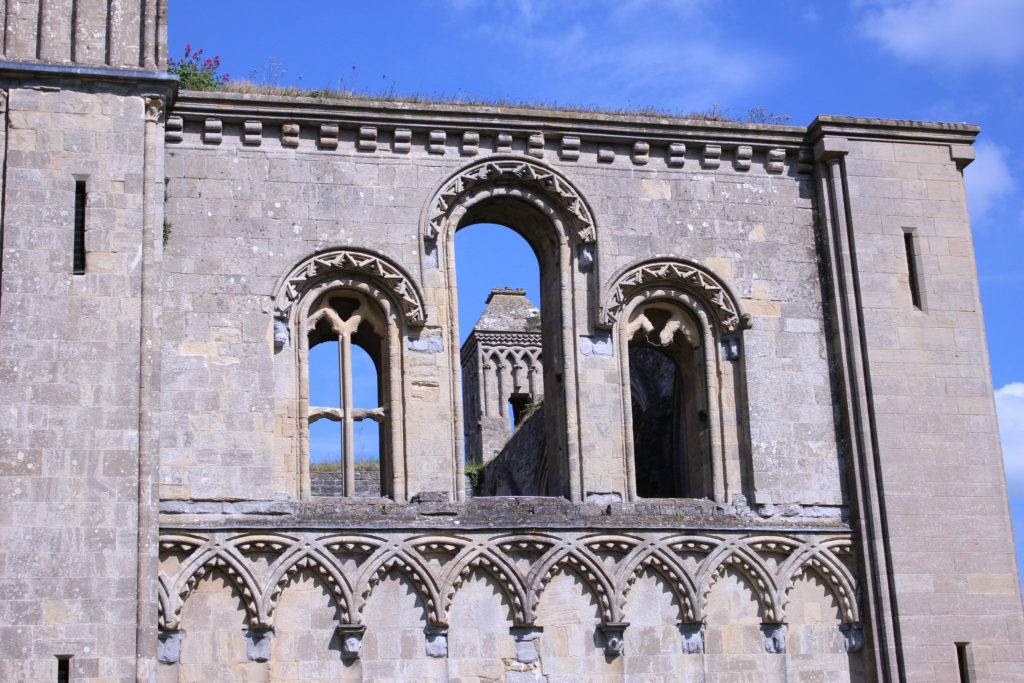 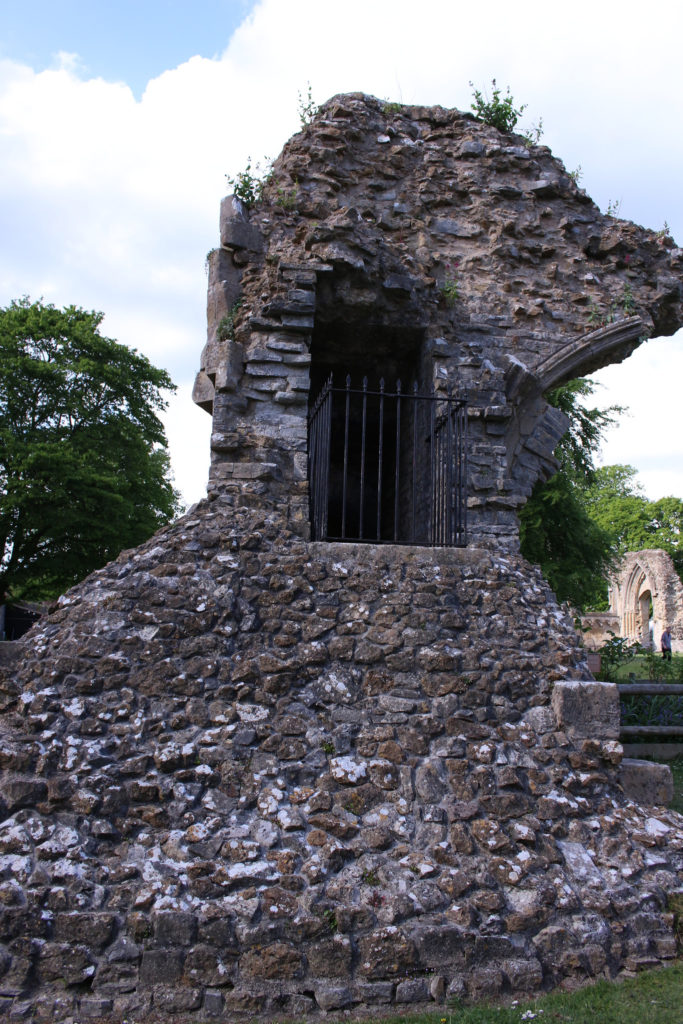 This is the model in the museum of the Abbey before it fell into ruins. It was HUGE: 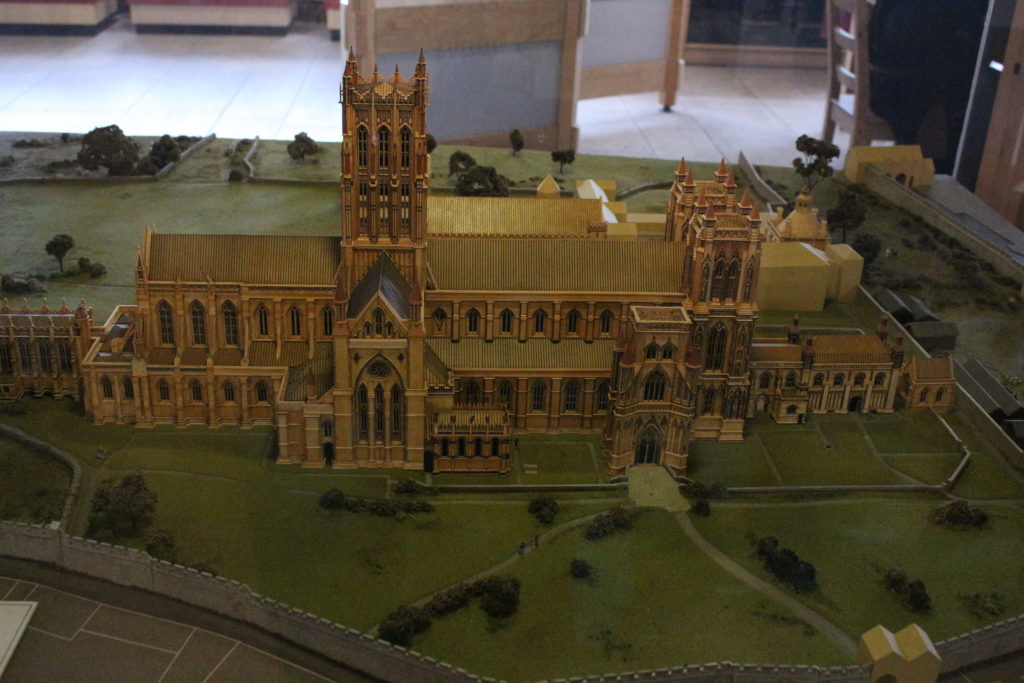 Kim had a 45 minute session with her shaman, which she said felt like about ten minutes. She said it was almost like being in a trance, or some sort of sleep state. The really interesting thing is that when he was done, her knee felt much much better. It was hurting before she went, and afterwards felt almost cured! And apparently that wasn’t just wishful thinking on her part, since after this we hiked up to the Tor, which she said she absolutely would not have been able to do pre-shaman treatment. It’s a steep hike. Sadly it didn’t STAY cured, but whatever he did at least helped temporarily. I think it was just a general healing thing, not specifically her knee- she didn’t tell him about it but realized later that she was visibly limping up his steep stairs, so clearly he figured it out.

I think it was after the Abbey and before the Tor that we had lunch at the Who’d A Thought It pub— I had a delicious Posh Fish Pie, with a tasty browned potato crust. Then it was off to the Tor!