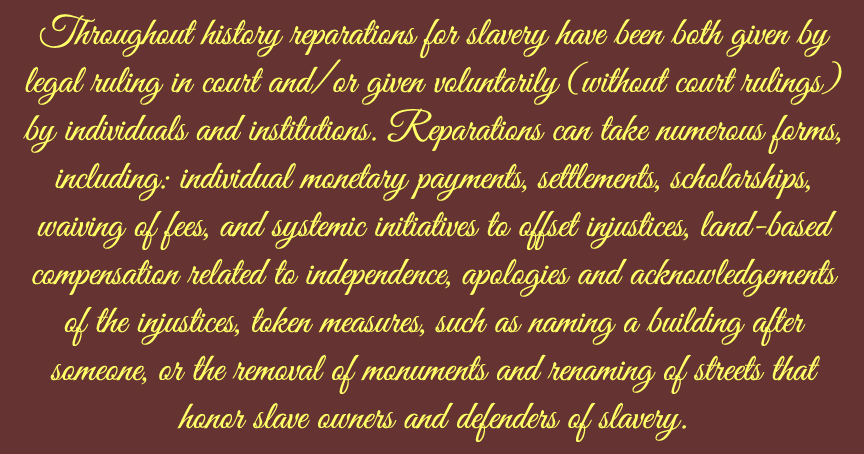 I saw this quote on the first diary post displayed, this afternoon:

“But yeah, the reparations thing is bullshit. That would be like me ripping off a store and someone having to pay for it 100+ years later.”

Here’s the thing about slavery and Japanese internment camps and forcing Native Americans on to reservations: those who experienced it first hand were just the first generation of many victims.

Slavery may have been declared abolished on December 18, 1865, but that was just the breeding, buying and selling of humans.  In the 155 years since then, we have continued to victimize black people through Jim Crow, for profit prisons, and prison labor.  Watch the Netflix documentary 13th, which is available on YouTube, so there’s no excuse to not watch it to educate yourself.

In addition to finding ways to maintain slavery and keep Black people as second class citizens, the United States government deliberately kept the Black community in poverty with a system called Red Lining, that began in 1933.  It allowed racial discrimination in the mortgage industry.  This tended to keep Black families in the cities and scrambling for jobs within a reasonable distance.

Redlining was banned only 50 years ago.  That’s within my lifetime, meaning if my parents were Black, I’d have been born in an area deliberately constructed to contain people of color and to keep them poor.  Even if I’d been able to work my way out of that community, the older generation would still be struggling with the opportunities they never got and the life they never would have been able to give their children.

Think about this:  why is it that in so many stories and even in the Bible, the wealthy tend to be the villains,  but in American society, we call them “job creators” and we are outraged by the idea that an hour of a person’s life could be worth $15?   How do people who swear up and down that the United States is a Christian nation forget that Jesus tells us, “And again I say to you, it is easier for a camel to go through the eye of a needle, than for a rich person to enter the kingdom of God,” – Matthew 19:24?

Don’t get mad at the victims for wanting compensation.  Get mad at the greed that keeps slavery alive and well in America, today.

* Just a few examples of black people being treated differently

Agree! I agree with all of it. As a social worker I see the disparities every day in the schools, the housing, CPS, the courts and healthcare.

@celestialflutter, I was a teacher before I became disabled.  I know.

Good for you making your point in your own post! More people should do this!

Say it… SAY IT… keep saying it. We must all say it. Until we all understand it and believe it… we have to keep saying it! Well done my friend!