She is caught in the middle or so it seems to her. Seeing the one in the
distance behind her, feeling the presence of another in front of her. Yet
she still continues to move ahead, away from one and to the other.
Trepidation with each step taken, heart beating wildly in her chest. Foolish
for her to think that they are “after” her, when she should know better.
They aren’t….are they? 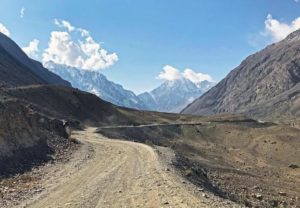 She’s not sure; the leisurely pace of the one behind her could mean
anything. A stroll just to clear the cobwebs from an otherwise very active
mind. But the presence felt before her? That might be another thing
entirely. It causes her to falter in her need to just be away. Falling into
the sand and scraping her knees, coming quickly to her feet and continuing.
The wind blows, snapping the loose tendrils of hair in and around her face;
flicking across her dry lips and in to her eyes. The sand stings her cheeks
and brings tears to those golden orbs, turning away from what’s behind her
and looking toward the mountains before her.

What now? To stay where she is and allow the one to catch up? Or take her
chances and move forward, to see if her premonition of another one in black
waits? But the question still remains, though she knows the answer that
neither one are “after” her…. who do they search for, if anyone?