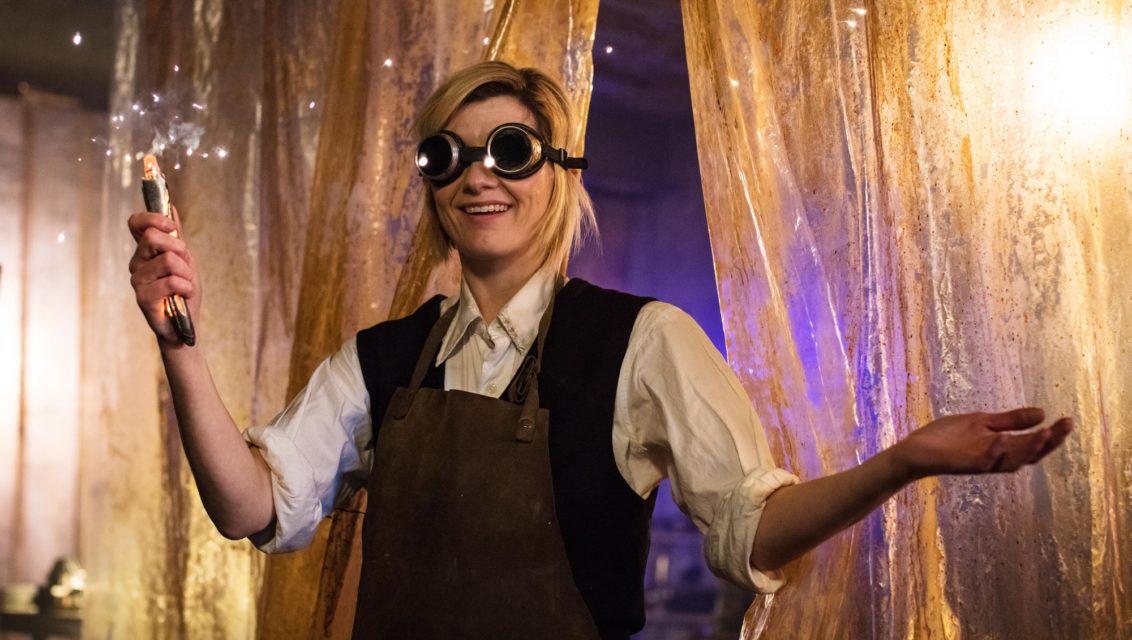 So, this is something new I want to do here.  The plan is to review every new episode of Doctor Who.  Naturally, there’ll be spoilers.

Synopsis: A mysterious thing appears in a forrest and another mysterious thing crashes into a train.  Coincidence, or are the two related and how does the woman who crashed through the train roof fit into things?

I’ll start by talking about the good.

Jodie Whittaker is outstanding as the Doctor.  I was never one of the people who thought her casting would be thew absolute ruin of the show, there’s no reason why a woman couldn’t play the role and I knew she was a good actress.  But she blew me away with a performance that invoked the previous actors in the role but was wholely her own.  Looking forward to seeing how she develops further.

I may not be keen on the design of the new Sonic Screwdriver, but I did love the scene where it was made.

The new version of the theme tune sounds amazing and is a great throwback to the theme of old while still being updated.  I loved the score as a whole, come to that.  A nice change from Murray Gold who I think probably hung on a bit too long.

The design of the bad guy and the bundle of coils were cool.

The episode in general looked good.

The design of the ship used by the bad guy was bad.  I mean, all I could think about was how long it would take me to get through a Hershey’s Kiss that size, which is probably not the desired reaction.

Not sold on Ryan having dispraxia.  After making a big deal about it in the opening, it seemed to basically disappear.

Not sold on the new companions, yet.  Maybe that’ll come.  I hope it does anyway.

Now, Chris Chibnall is not a writer I’m keen on.  His episodes of Life on Mars were good.  Broadchurch series 1 was good.  That’s the extent of the praise I can give him.

In particular, his episodes of Doctor Who have never really impressed me.  The one I liked most was Dinosaurs on a Spaceship, which is about as good as you might expect from an episode of a TV show with that particular title.

Now, before him being mediocre wasn’t that big a deal.  It was one or two episodes from an entire series.  Now, he’s the boss.  He’s not only writing most of the episodes but also in charge of the general direction of it.  When he held that position on Torchwood, the results were not good.

So, he had a pretty big job to convince me he was the right pick for the job.  Convincing me had to start with this episode.

What I got was an average Chibnall episode of Doctor Who.  Nowhere near clear enough.  It had the pacing issues that his episodes tend to have (42, I’m looking directly at you with this).  There was a lot of exposition by the bad guy.

Grace’s death didn’t shock me.  It didn’t make me sad.  As soon as it became obvious that she was more adventurous than Graham, it was also obvious she had to die.

Holy hell, can we please stop with the post-regen Doctor acting strange because of the regen thing already?  We’ve seen it with every regen since the show returned.  It’s getting lazy, as way of not having to bother with the actual character.  Say what you will about the McGann movie, at least it got that much right.

Now, we have to talk about the bad guy.  First of all, the Tim Shaw bit went on far too long.  Secondly, just how badly did Chibnall want to make sure we knew him and his race were evil?  He kept piling things on.  By the time it was revealed he was cheating in the test, I rolled my eyes.  When he revealed that they kept the abducted in stasis just between life and death I thought “Of course they fucking do”.

My problem with this is that it’s a sign that the writer lacks confidence.  Either they are not confident that they have written the character well enough or it’s that they’re not confident that the audience will get the point and have to keep layering things on.  What you end up with is a caricature, almost a parody.  Pick 3 things, stick with them and trust the audience.

(It’s worth noting that I’m a huge JK Rowling fan but she’s guilty of exactly the same thing with Matthew in the Strike novels.)

I’m not at the point of hate watching or even giving up altogether on the show.  But, if this is a sign of how thi9ngs will go, I’m not much looking forward to the Chibnall reign.

Hubby said he really enjoyed the new Dr. Who and said the female doctor is a perfect fit….

Excellent review! And I am SO pleased with Jodie Whittaker – she was fantastic. I miss Peter Capaldi, but I still miss David Tennant too, so no big deal. I do wish Clara hadn’t been the last companion for so long- I disliked her so intensely that it was hard to enjoy the episodes. I nearly didn’t watch Victoria because I couldn’t stand Clara, then was pleasantly shocked to discover  Jenna Coleman is perfect as Victoria.

Ah I was with you until you insulted 42, I think it’s a hidden gem!

I was surprised how much I enjoyed it this one, I was mildly concerned with Chris Chibnall too but I was really impressed, and optimistic for the rest of the series now