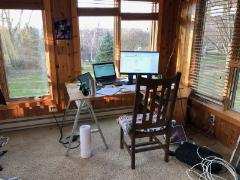 The picture is not of my house.   It’s someone else’s.   I do not have permission to post it.  I hope no one finds out.   I hope if they do they don’t care.

It’s a bit symbolic though.  Of confinement, of waiting, of isolation.   We are in a tiny bit of prison.  We have almost infinite connection with the world.  We have all the comforts of home…. because it is home.

Someone asked how this state of semi-quarantine in different from my everyday life, and I  have to admit that it’s not very different.   I was staying home playing on the computer everyday anyway.   Now I just have a lot of company.  Not actual company of course, the virtual kind.

Son and I were thinking who might have been the last person to be inside our house and came up with the insurance lady who came to sign my sisterinlaw up for insurance last fall.   The away kids were down at Christmas time but haven’t been back since.

The last time we went anywhere other than shopping or doctors’ appointments was at the end of February when we went to see Will’s basketball team play at Byron MN, a suburb west of Rochester.  It was a beautiful new luxurious school with bears as its mascot.  There were wonderful statues of bears in front of the school.   I made the kids pose in front of them but never got the pictures out of the camera.

Lots of things have been cancelled.   I had a minor doctor appointment cancelled last week.  It was for the first of May.   Jim is having his P & Z meetings over the phone.  My writings groups have disbanded for the duration.

I’ve been trying to buy groceries once a week – for my son and myself and for Joana.   I go at 8 am on Thursdays when older Americans are invited specifically.   The term ‘older Americans’ is one I stole from Joe Biden.   It seems kind of friendly, and I of course make no disparage toward younger Americans or non-Americans of any age.

I like buying groceries once a week.  I like the discipline and the list and the need to use up food in a timely manner.   I marvel again and always at the variety and sheer amount of food that is available – even in a time of perhaps perceived shortage.   We are fortunate people even in a time of plague.

Last week I bought a lot.  This time I think I’ll attempt a bit of restraint.   But still, a week is a long time, and ever since I stopped working food has been very important to me.  So important that I now weigh more than 200 lbs.   Quite a bit more, actually.  I know it’s not good for my health and I know it’s a greedy habit, but I guess it’s the way I am.  I do not want to change anything.  I do not want to be a better person.   I want to wallow in self-indulgence.

I always thought I wanted to write differently here than I do in Prosebox.   I wanted to practice a different level of honesty.   I’ve been writing a bit in 750 words too, I have a 19 day streak.   I realize that is pathetic, but it’s better than nothing.

Another thing to carve on my tombstone – Pathetic, but better than nothing.   I’d get a tattoo except I do not believe in tattoos.   I do believe in tombstones.

Hello and goodbye.   I might come back sooner next time.  No promises, either way.

Love you all.  Always.

Seriously, now, I wish I had that kind of view. Mine is a vast, colorful, brand new… freeway wall 😡

Love to see you here!  How would you write differently on the two diary sites?  Some post to both sites.  Do you think there is a different kind of writer on OD vs PB?  I thought that OD would attract a different following when it reappeared as a paid site, but I’m not so sure.  Perhaps diarists are a fairly homogeneous group?  Must admit that I have often felt like an outsider – that I didn’t fit the mold on either site.

@trunorth I wonder if a lot of us ‘old timers’ are ones who had lifetime passes here and OD continued to honor them.   That is my situation.   I pay at the other place because I have what seem to be ‘close friends’ over there and I like having a place to go to keep up with them.   I think the glory days of on line diaries are gone – I feel like Terry Malloy in ‘On The Waterfront’ – I coulda been a contender…

This place though just feels different.  And I thought I could divide my thoughts/personality/whatever in separate categories on either place.   I do not like to cross post.  I want to write something different everywhere I write.   Having said that, I am willing to post photos on more than one site.   btw, the fun of taking and posting pictures has kind of left me.   I like seeing other people’s pics and feel the obligation to post my own but I just almost never get around to doing it.  I have lost almost all the digital pictures I’ve ever taken when Photobucket went down and when I didn’t save photos from my own computers as they went down.   So I am just kind of at sea – in my life on line.

So I’m glad to hear from you.  Kind words are even more welcome than ever.

@womaninthemoon I love the ease of posting pictures on OD – so simple even I can do it!  I like seeing pictures – worth 1000 words ?  Well maybe not but they tell their own story.

It’s nice to see you again…..To me it doesn’t matter how or what you write as long as I know you are okay….