As I awoke to snow falling this morning at 6:00AM, it certainly doesn’t feel like Spring.  Or April, for that matter.  Especially when it’s a lovely 72°F in North Carolina.  At least I am looking forward to a cassoulet on Wednesday at a little wine bar & bistro on 33rd Street.

Yesterday’s flight into JFK was on-time and uneventful, the best type of trip.  I dozed for the majority of the flight, then had to listen to a driver who wanted to natter on during the trip to the hotel.  I wish the ride service apps (I use GroundLink, but this should apply to Uber, Lyft, Blacklane, and the others) had a profile setting that lets you specify if you prefer conversation, music or silence during the ride.  I had to hear an ongoing monologue about the Chrysler K-Car Executive Sedans and Limousines he drove in Manhattan in the 1980’s.  Today, due to the state of the roads in NYC, the car services have to have SUVs, or expect 1-2 years of life from the vehicle.  Sedans just take too much of a beating.

On Saturday, we celebrated the 31st anniversary of some friends, JN & JT, with a lovely French meal paired with (sadly) the last bottles of some exceptional vintages from our cellars.   We started with a Dom Pérignon 2006 Champagne. Often wine reviews are second only to art reviews in their over-burdened, flowery, and utterly meaningless language, but there are three that are worth sharing regarding this vintage:

The 2006 Dom Pérignon is a beautifully balanced, harmonious Dom Pérignon that strikes an incredibly appealing stylistic middle ground. Rich, voluptuous and creamy, the 2006 shows off fabulous intensity in a style that brings together the ripeness of 2002 with the greater sense of verve and overall freshness that is such a signature of the 2004. Bass notes and a feeling of phenolic grip on the finish recall the 2003, as the Pinot Noir is particularly expressive today. After an irregular summer that saw elevated temperatures in July followed by cooler, damp conditions in August, more favorable weather returned in September, pushing maturation ahead and leading to a long, protracted harvest. The 2006 falls into the family of riper, more voluptuous Dom Pérignons, but without veering into the level of opulence seen in vintages such as 2002. Antonio Galloni 97 points

It’s not often you fall backwards when a wine is first launched on the market. This time both me and my friends, who got to try this jewel at my champagne bar, fell in love instantly. It is all here so beautifully orchestrated in this incredibly well-balanced and flowing rich symphony. It is so voluptuously charming and welcoming immediately, but at the same time so complex that the interest in what you will discover in the next gulp never ceases. Here are all the pillars that I perceive a Dom Pérignon should have. A gigantic large and intense aroma, a silk caressing structure and a dazzling grand finale. Notes from the sea, roasted nuts, coffee, brioche, tropical green fruits, stone fruit, green apples, sweet orange citrus, gunpowder, nougat, mushroom cream and black truffle are all there like a perfectly tailored tuxedo. Love at first sight. Richard Juhlin – 94 points – Potential (97)

Very bright and pale in the glass. At first the nose is tight, before unfurling into notes of zesty citrus fruits, smoky slate and flint minerals. Very clean, fresh and pure with bags of intensity. It is only after some time that hints of brioche emerge; one has to give this time in the glass to reveal its soul. The palate reflects the nose, reticent to begin with, but in time notes of citrus zest and white flowers mingle with the classic smoky, toasty and mineral complexity; further still the creamy brioche returns as well as fleshy, juicy white peach flavours. The finish is long with great citrus intensity, zesty and mouth-watering. This is a Dom Pérignon for the cellar, one to be laid down to mature; it has the potential to develop into something really quite special. Goedhuis & Co

Dare I say it lived up to the hype? 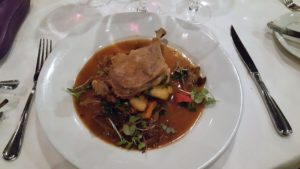 The wines that followed were equally exquisite.  There was a 1992 Henschke Hill of Grace, which blossomed and then withered within 45 minutes of uncorking.  But what a glorious 3/4 of an hour!  The 2004 Duca di Montalbo and a 2009 “5 Partides” Gratallops Vi de la Vila both elicited the praise of the table.  Overall, a fine evening of food, wine and company!

I am tired just reading that description but glad it lived up the the hyperbole.  It’s raining in London but friends have posted many photos of the snow in NYC today – safe travels and stay warm!

I think the last time I read your diary, many years ago, you were also describing a duck confit. All the wine sounds so good. Im only allowing myself wine on the weekend. It’s a painful wait but so delicious when Friday finally rolls around.

I think that would be a great improvement to the app –> a profile setting that lets you specify if you prefer conversation, music or silence during the ride –> and for real life too, like at the office, at home, while out shopping…