Every summer, I take the boys for two straight weeks and this year my ex had a very big request. She and her husband just bought a new house and wanted me to watch the kids for the last two weeks of August, which would allow them to pack up, move and settle in without having Jon get in their way and slow things down. I want to help out wherever I can, so I agreed to make that my few weeks watch for the summer to help the move. I see this as a win for me cause I get to hang with my boys and I don’t have to physically help with the move. Win-Win.

So for two weeks before labour day, I took both Jon and Ethan to give my ex enough space to do the hellish work that is moving. Suck to be her, but I did my part. So I had the boys for fourteen days, and I’m happy to say they flew by without incident. They were good very good for me and we had a grand time. I feel bad that I couldn’t take them to a ballgame like I’ve done every summer, but shit happens. The cool part is I took Jon out for a haircut.

Usually his mom and step-dad just buzz his hair short and call it a day, but I wanted to do something different so I took him to a barber, and got them to give him a real cut and a better look. I explained to the barber Jon was autistic and helped out by holding Jon still and talking him through it. Twenty minutes later, Jon has a new do and was amazingly good during his cut. I was so proud of my little guy I took him out for Harvey’s after. Here are some cool pics of it: 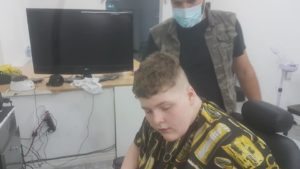 This pic is Jon getting his cut… sitting still and being a good boy. 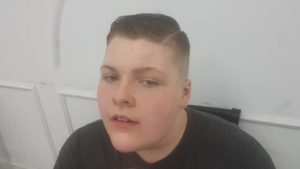 And check out the finished product! Looks amazing, eh? 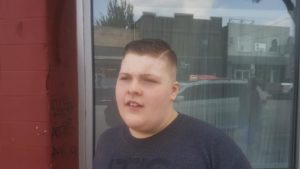 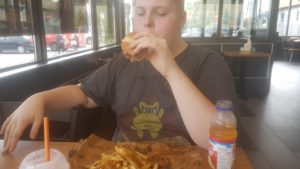 And our reward, going out to Harvey’s for big cheeseburger!

I really liked how that turned out, but one person who didn’t was his mother. She hated the new do.

You can’t please everyone, but everyone else thought Jon looked great!

The fact that the ex hated it is just an added bonus.

So the two weeks with the boys flew right by, but we all had fun. The boys even got to hang out the park with Katherine and that was fun cause Ethan loves hanging out with his new sister. They all seemed to have so much fun! 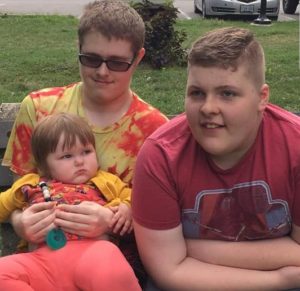 It’s nice to have all three of my kids hang out… the new edition appears to be fitting right in.

So that was the end of summer 2020… it’s almost over people.

You ex is an idiot…I love that hair cut and he actually looks like a cute guy.  And as long as he likes it that is all that matters.  You are an amazing dad and you are lucky to have these three.  Too bad you can’t have them 24/7.

@jaythesmartone She should have kept that comment to herself, cause now I’m going to get that cut for him every time… just to piss her off.

he looks great!  you are a great dad and ex, lol, she’s lucky,

Looks good to me.  I’m glad everything worked out so well for you.