Even as I want to type, I say to myself “deep breaths, deep breaths.”

My daughter announced that she wanted to bring her family (my 3 grandkids included) to visit this past weekend as they had a school break.  Unexpected, as we usually visit her at her place.  While saying that she is definitely welcome, I admitted that the spaces for her to stay were more limited from her last visit. (we live about 3.5 hour drive from each other)

Her adult brother is currently living with us. We invited him in his currently “in between” status, but it has lasted longer than anyone is comfortable with.  I told him he had to move his crates-of-stuff out of the grandkids’ play area into the bedroom where he sleeps.

Even after our son moved his things out of the way, there was still not the “hospitality bedroom areas” available for my daughter’s family that she expected.  On the phone, when she asked me why that was the case, I told her that we had extra “stuff” from each of her three different grandparent households that we have had to absorb over the last 2 years.

Also, I am a hoarder.

So, daughter brought her family here.  We took the kids to the water wall fountain at Williams tower, we went to the Museum of Fine Arts Houston and saw the Impressionist special exhibit, we played outside at the park near my home, we took the 8-year-old to her first opera… 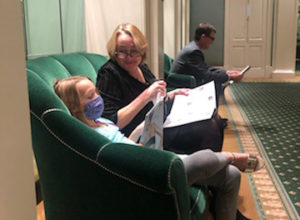 and my daughter bulldozed my house.  In a good way.

I’m glad you were able to spend time with your daughter and grandchildren though.  When you say your daughter bulldozed your house, do you mean she whipped it into shape?

@thebestisyettocome Exactly right. Our garage is now full of stuff to be put into the trash and recycle dumpsters as room allows for the next several weeks.  One bedroom is stacked with boxes for us to bring to Dallas for each of our daughters on future trips as room allows in our vehicle.  There is also a significant pile of things to be carted by me to donate to Good Will.  After all of this is accomplished, there will be much more floor space!

@thirteendogs Perfect! What a treasure your daughter is!

I can totally relate – I always feel like a tornado went through our house when our daughter and baby granddaughter visit! Glad you were able to spend some quality time with your family. 🙂