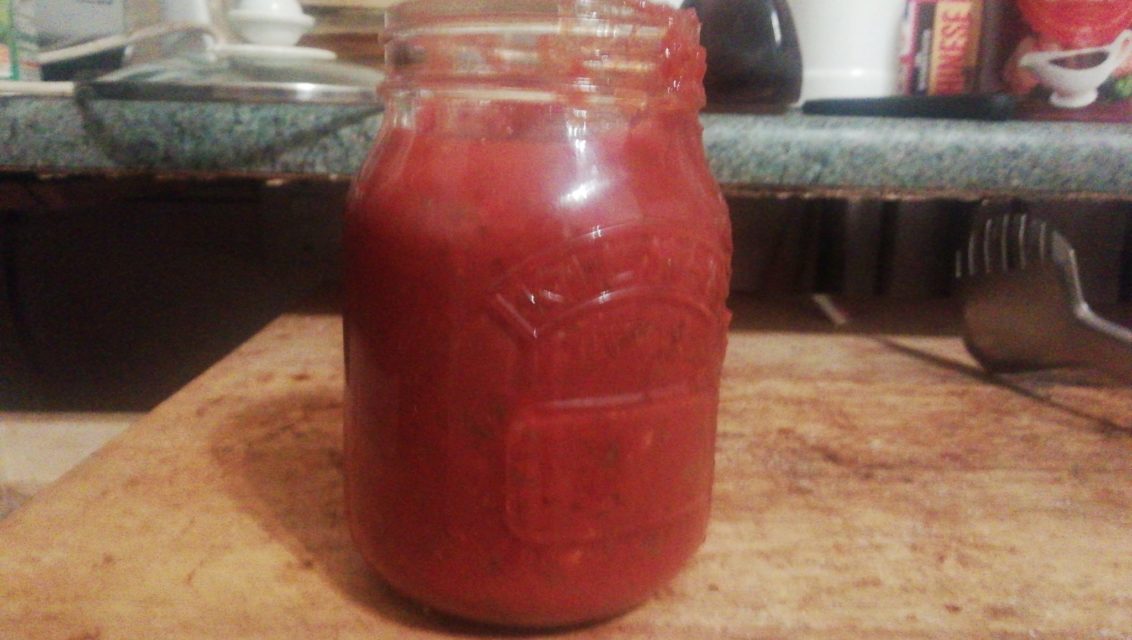 So, something I did while I was away from ODland was make my own pasta sauce.  I tend to make pasta and sauce when I’m really short on cash, simply because it’s cheap.  I decided to try making my own pasta sauce because a) I have a slow cooker and should be able to make it in that, b) I can freeze some of it, c) it might work out cheaper and d) why the fuck not?

Turns out that, for th4e price of a decent jar of the pre-made stuff (does 2 meals) I could make three jars of the home made stuff.

Problem was, that I bookmarked the recipe on my laptop and when I decided to make more today (I’m down to my last jar) I couldn’t find it again.

I found a new recipe and made it today.  The result is in the pic.  It tastes OK.  I followed the recipe exactly (which I always do when cooking something for the first time) and it makes a great base to be going on with.  Probably try adding a red wine stock thing next time, probably in place of the paprika.

Had to shout at the bank yesterday.  I got a text from them last week saying they don’t suspect fraud on my account but, in an abundance of caution, they were replacing my bank card.  Unfortunately, they cancelled my old bank card before I got the new one, meaning that when I bought new printer ink (I finally got my money from YouGov) the payment was refused.  It also stopped me from using the mobile contactless through the mobile app and, when I tried to phone them about this through the app yesterday, I still had to go through the security checks.  Which isn’t supposed to happen, as logging into the app is supposed to pre clear me.  They tried arguing that I should wait 10 days to use both again.  I pointed out that I refused to wait, seeing as I never actually wanted a new card to start with and they sorted it instantly, though the guy was struggling to understand that I couldn’t restart the mobile i was using to call him and stay on the line at the same time.

I also got the ink ordered.

Submitted a story that’s very close to my heart for a competition today (me and this story have a long history that I might write about sometime if anyone is interested).  I should hear next month about another competition I entered.

I also should get my new smart watch this week.  More about that if it actually arrives.

I think if you are comfortable writing about your history I know I would be really interested in knowing you etter…But then everyone who writes here is letting something about them put every time they are here.

Sorry about the bank snafu, glad you got it straightened out.

Good luck in the story competition!