So Saturday night a friend was sending me texts telling me to watch this video, watch this other video, these were praise videos,  she is sort of aware of what is going on in my life and I can’t share all the things in her texts but if she only knew how close  to the heart of the matter she really was her head would explode!  but in the sidebar this video kept coming up, over and over,  but I didn’t want to click it because I didn’t like the name of the band “Disturbed” and the song was the Sound of Silence, but man was I blown away..because it was exactly what I was feeling which is that I was ready to fight the silence,  to fight the times I had kept my mouth shut, the times I didn’t reach out,  my friend Don died about a year and half ago we were best friends he died alone in a shitty motel room of an overdose,  his sister called me 6 months after his death when the phone was released from evidence and she saw that I was the last person that had called him.  My name was listed as “Jeff  Brother” in his phone..so yeah,  I am ready to get back in the arena,

<Selah>  Sunday on the Mountain,  I spent time walking, praying, thinking and I ended up in Nehemiah which is primarily about God’s people returning to Jerusalem to rebuild the city and walls,  they were cleaning up the mess made by their forebears, but what I found striking is that they basically worked and slept and lived on the rubble and trash, trash and rubble that wasn’t their own it was somebody else’s mess, while some worked others stood guard…it was dirty work..don’t take my word for it though,  go skip to the end and see how it turned out for them…

On Monday morning  I had said to Her,  i’m ready to get my hands dirty, get back in the trenches,  Yay! Team God!!  Let’s Roll!!! … on Monday night I got this text from somebody I love as a daughter..she is only 15,  i’ve known her since she was 7… 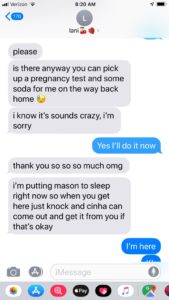 YOU HAVE TO BE FARKING KIDDING ME!!!!  I am singularly unequipped to help her,  I did of course go,  I have the receipt,  I’m holding on to it while I process my thoughts…I am unequipped because I have a father’s heart,  I am RAGING ANGRY,  I WANT TO BEAT THE BOY,  HOW DID YOU ACCESS THIS GARDEN?!?  I WANT TO PILE DRIVE HIS BODY INTO DUST, <blink>  I love her,  I care for her, i have moony eyes when i think of her as “my girl”….<blink>   I WANT TO LOCK HER IN A ROOM AND NEVER LET HER OUT IN PUBLIC…i am heart broken,…i gave her shitty advice and drove home…in my spiritual world I have been carrying her before the altar of God asking for help…about 15 minutes later she texted that everything was ok and just fine..but every fiber of my being knows she is lying..8 hours later at 6am she is texting me about having a doctors appointment and needs 150.00 dollars to get on birth control…(yes she really thinks I’m that stupid or she is totally panicked)

HER,  stepped up to bat…totally a God thing how that happened…wish I had time to explain but cannot atm.

Two weeks ago,  in a moment of clairvoyance and utter clarity I said to Her,  you are going to heal thousands…(she cried so I guess I was right!)

The Beauty of God and how he works always amazes me,  the humor of how he works..but to find that she starts with someone so close to me…makes me smile…

-from deepest heart of the South,