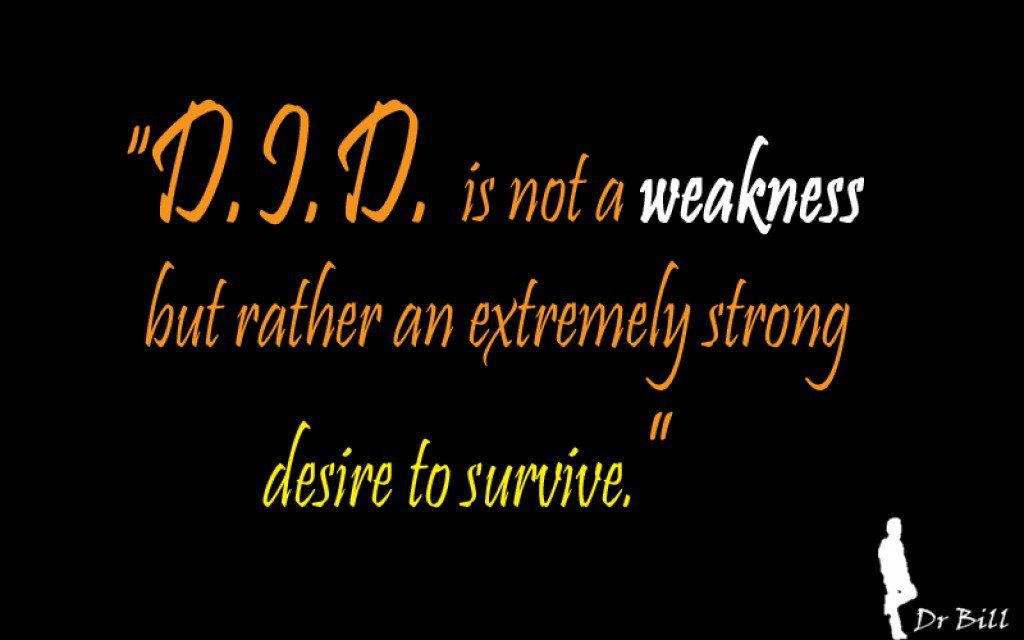 So, I’ve mentioned in a previous post that I’ve dealt with DID (or some variant) and C-PTSD. The voices in my head (sometimes outside of my head) pipe up from time to time to comment on what I do, how I’m doing, what I’m working on, etc. If I don’t check in with them from time to time, they cause havoc and self-sabotage whatever I’m working on because they all have different ideas of what’s important. (Which sucks. Mega sucks.) Worked on keeping a journal for this purpose with one of my previous therapists. I think I’m going to do intermittent ‘check-ins’ with the system from time to time on here, just so I can work out any issues among them (therefore, among myself).

Just to introduce them, I have ten ‘voices’ (or alters, identities – whatever you want to call them). They are fairly manageable IF I communicate with them from time to time. If I don’t, things get worse for me in all aspects of my life.

So, let’s begin the commentary, shall we?

James: Stop editing what I say. I hate when you do that.

James: No, it doesn’t. It was a statement. It was said exactly how it needed to be said.

Jennifer: Oh my god, both of you, shut up.

James: You’re the one that needs to shut up, telling us that we’re stupid all the time.

Jennifer: Well, all of you deserve it. It’s not like we ever work well together, anyway.

Trish: Yeah, because of you.

Jennifer: Well, if you wouldn’t have broken down on the job, we wouldn’t be in the situation we’re in right now, anyway, would we?

Adam: Hey, give Trish a break. It was partly my fault. It’s something I’ve never done, so I wasn’t able to pick up the slack on this one.

Jennifer: If she were a little more competent, we wouldn’t be having this conversation, and you wouldn’t be blaming yourself, Adam.

Ezo: You’re all going to die.

Emily: Stop arguing! I hate it!

Amanda: Now, everyone, if we all just settle down, we can get back to writing that novel Angela wants to write. Wouldn’t that be nice? (<- Last sentence added by Angela)

Trish: Yeah? When the hell do I get what I want?

Jennifer: What? A trash bag over your head?

Trish: No! Some level of respect would be nice!

Jennifer: No one’s ever going to respect you, Trish. That’s the thing. You screw up on everything, including this last stint with the job.

Trish: That was Ezo’s fault! He kept saying that creepy stuff he always says!

Jennifer: You can’t blame Ezo when you’re the weak one, Trish. And you always blame everyone else.

Trish: Well, everyone always blames me! What else am I supposed to do?

Jennifer: Not screwing up would be a good start.

Ezo: Let down. You’re a nobody.

Jennifer: Who let you out of your cage, Ezo?

James: He’s been out of the cage. That’s partly why we’re in the situation we’re in. I actually kind of side with Trish on this one.

Jennifer: You’ll side with anyone who lets you clown around, James.

James: You want to talk sides? Who was the one who broke down at the restaurants and grocery stores, Jen? It wasn’t Trish. It was YOU. Getting all paranoid and wonky like you tend to get.

Jennifer: Listen, I have an issue, I get it. I can’t help it.

James: And who sought out medication? It was Amanda. Not your dumb-*self* – Angela, quit bleeping me out!

James: Well, too bad so sad! People curse, you’re going to have to grow up and get over it.

Angela: There are children, James.

James: So? Emily and Nate aren’t listening, they’re over there doing god knows what. Being unsupervised.

James: Speaking of which, back to the point, Amanda went and got medication, not you, Jen. So if anyone wants to call anyone stupid, I could kind of call you stupid right now.

Amanda: No one is stupid. And Emily and Nate are always listening.

Angela: So what’s the plan?

James: What do you mean, what’s the plan? For getting back to work? I don’t know, that’s Adam and Trish’s job to think about, yeah? Anyway, I thought we already came up with a plan.

Trish: The plan is, Amanda goes to the doctor’s appointment, tells them everything is hunky-dory, we get back to work, find a different job, and somewhere in the middle get back to writing and coaching.

Trish: Maybe not. I mean, we can see things from multiple perspectives.

James: Multiple being the keyword there. Normal people don’t think like we do.

Ezo: We’re not normal. We’re inferior. We are darkness. We are death.

Angela: Should we delete this entire conversation?

Jennifer: We should. It’s stupid.

James: I kind of like it all written down here, except for the editing my comments part.

Trish: But people will think we’re crazy. And that we don’t know what the hell we’re doing.

Adam: That’s your insecurity speaking, hon. Don’t get too worked up about it.

James: Wait, where’s Samantha been in all this?

Angela: She’s sleeping. She had a busy day helping hand out those brochures, talking with people, etc. etc.

And there you have it, comments from the system about my day and stuff what’s been going on in my life. This is how my brain works.

As you can see, I kind of encapsulate the mad hatter syndrome. I really am insecure about posting this stuff, but at the same time, I want it to be shared so I can work it all out myself and keep a record of it. Hopefully no one thinks less of me for it, but there you go.

Literally dissociated and almost hit the delete button. I’m posting this. Going to do it.